In this review of Ultra Off-Road 2019: Alaska we will immerse ourselves in bland and inhospitable lands. A game that certainly tests our patience while driving

Since the good old Microsoft Flight Simulator of 1982 we have come a long way in the field of simulators. Today there are all kinds of them: bus simulators, car racing, agriculture and others. Some of these are even used as tools in military training. With time and fame, however, the genre has become tainted with little simulation elements, more playful and arcade. It can therefore happen that it is difficult to recognize them properly, at other times it is enough obvious.

So what is or isn't a simulator today? Let's find out together in this one Ultra Off-Road 2019 review: Alaska for Nintendo Switch, a game that in the logo defines itself as a full-fledged simulator.

Let's give ourselves context

Ultra Off-Road 2019: Alaska is a game developed by Icetorch Interactive and brought up Nintendo Switch da Ultimate Games October 25, 2019. On the Eshop page, the game defines itself as a realistic off-road driving simulator and the first title of a series in development. With no roads or paths the player is free to move around in the two large maps of Alaska, or he can choose to follow them eight tracks available. The description lists the two game modes, a dynamic weather system, visible damage to the car, day and night cycle, realistic physics, and complete control of all vehicle specifications.

The conditions for a simulator are there and they are also interesting, being able to live a similar experience in portable mode is of considerable potential. The publishing window is also very clever because it tries to monopolize the hype on the most famous Spintires: MudRunner - American Wilds coming out in a month on Nintendo Switch. The problem is that Ultra Off-Road 2019: Alaska can hardly fall into the simulator category, unless the floating pizzas are a peculiar feature of the genre that we have failed to grasp. 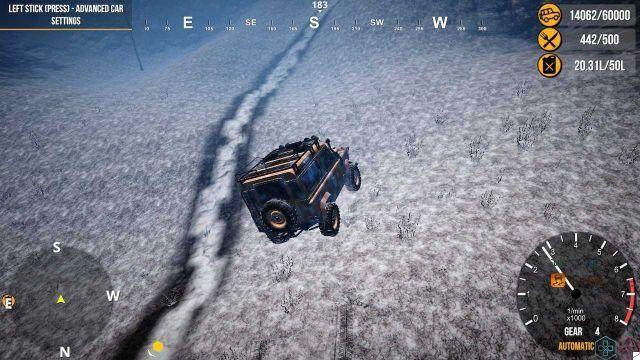 One of the first things that will catch our attention is thereabsence of the Spanish language, a lack not too important if we think that there is very little to read. After selecting the language we will be immersed in the main menu. From here we will be able to select the game mode, the type of car to use, look at the credits or check the options (including volume, camera sensitivity, vibration, language and display of game controls). In the event that we started the game by selecting “New Game” we would be entrusted with the default car, it is therefore advisable to go to the car selection in the main menu.

In this section they are provided to us four cars plus two Madrunners differentiated only by color. Each car is characterized by different wheels, bodies and weight that can affect the game experience. A car with bigger wheels will cope better with rough terrain. Once the color has been selected (it is not possible for all of them) to start the game.

the entire Ultra Off-Road 2019: Alaska takes place within two large open maps representing the green and snowy environments of Alaska. Before starting we will be shown our only long route divided into eight stages. We will cross Alaska in the two maps alternately, once we have a grassy path and the next one will be snow white. In the mode “New Game” we will have a fixed destination, while in that "Free Ride" we will be able to ride freely for the map without fuel limits and without a target. 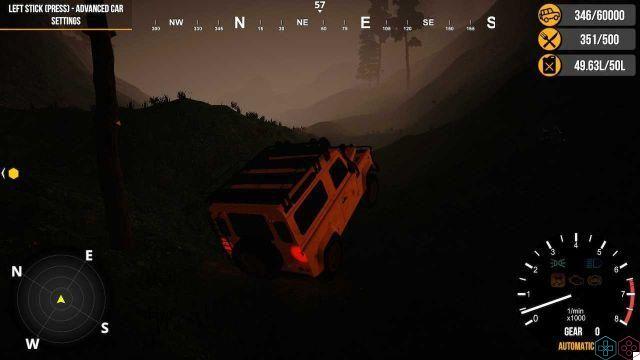 The player's sole purpose is to cross the landscape from the starting point to the destination indicated on the interface. The game has suggested routes, but they are not mandatory as we will soon find out about to be able to reach the goal totally in our own way. In fact, we can decide to take any path at our leisure. Generally a very positive feature except that the game lacks the pedigrees to take advantage of it.

Le maps they are indeed made in a decidedly unnatural way. Where the route is visibly suggested it is possible to meet various natural elements, such as rocks and trees, mostly positioned in such a programmed way that the natural environment seems to be an artificial obstacle course. Just off the path, the existence of mother nature quickly disappears, leaving space for almost deserted environments where only a few rare trees or sprays of grass from the ground peep out.

The car without too many obstacles can go up and down the hills at will. We are not at the level of the horse's climbing skills in Skyrim but it will be possible, with a little effort, to climb almost any slope. From there you will be able to admire the map covered by the typical abundant fog to limit game performance. From the top there are two things: the car will fit perfectly balanced in the axles or we will be lucky enough to launch into the "crevasse". In the first case we will have to pause the game and restart the game.

In the second case, our vehicle will fall, rolling ruinously until it meets a tree or reaches the bottom. I defined the latter eventuality as lucky because the consequences are really negligible. If the car is rolled over, the game will automatically spin it back to its normal state. What is the point of getting the vehicle back straight if it should be destroyed? 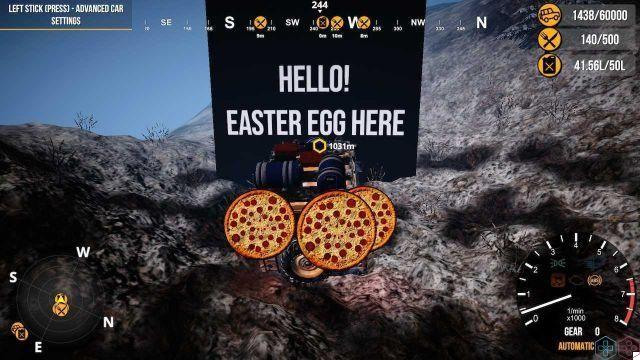 It is needed because the damages that are suffered are there, but they are almost non-existent or totally unreal. Rolling off a cliff will cause us as much damage as the collisions against the ground: in a case like the one described above, about ten thousand damage will be taken out of sixty thousand life points, for a flight ten times the height of the car. The shock absorbers had to crumble at the very least. Dents and clashes will in fact be accumulated with a points system. As you reach the limit of the life points, the machine will gradually start to lose power until it stops completely. Ultra Off-Road 2019: Alaska has three characteristics: life, hunger and fuel. Each of these has the same fatal consequence in case we fail to keep them, our car will stop in all cases.

To prevent these features from reaching tipping point it will be necessary to collect and use objects scattered around the map, which we can store and use at any time. Pizzas, hot dogs and soft drinks they will satisfy hunger, fuel barrels will fill the tank and toolboxes will be used to repair the car at any time. All objects that we will find floating on the map. A wild pizza in the middle of the forest is not a very realistic thing and definitely out of place for a simulator.

These particularities are very common in the arcade genre where the simulation is more a memory or a caricature. A realistic simulator should reinterpret the rules that govern reality to adapt them in the virtual world, doing it with a certain care in the sector it has set for itself. Flying pizzas are certainly not expected from a game that defines itself as a “realistic off-road driving simulator”. 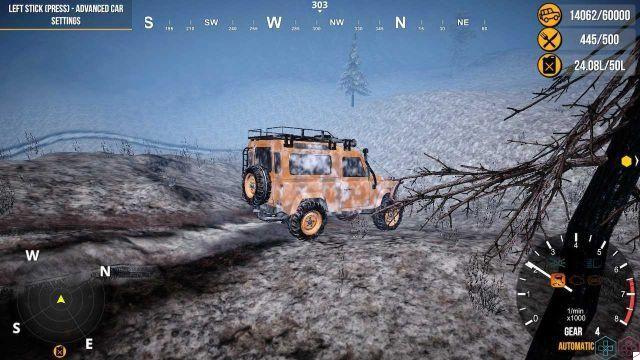 Neither to look at nor to hear - Ultra Off-Road Review 2019: Alaska

If the phrase "looks like a PS2 game" is often misused, in this case nothing is more appropriate. From a purely technical point of view it is a real disaster. The textures and polygons are of very low quality, the fog is then used too aggressively to try to limit the bad frames in which the title runs anyway. The green map is the one with the worst performance, while the snowy one has only a few more frames. In all this negativity, at least the cars have models that are more than acceptable even if devoid of any reflection.

The game also promises visible damage to the cars, which in practice manifest itself with some defect in the headlights and the engine smoke that becomes more red as the number of hits suffered. Audio is totally out of control. Hitting a tree or the ground with the car generates a sound similar to a loud gunshot and reverse is twice the volume of the normal engine. The rest of the audio is not received, not even his natural ones. 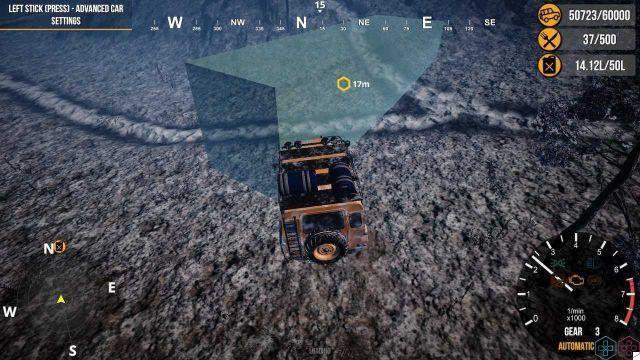 The end of the path

If this review were like a typical Ultra Off-Road 2019: Alaska track, we will eventually have a large transparent parallelepiped marking the finish. This was a painful game because the driving itself isn't terrible, but the whole thing is surrounded by a system that is so poorly crafted that it becomes superficial. If we head to the shop page at least they were 50% honest, the screenshots shown are indeed terrible. The other less honest half is the non-game trailer, taken directly from its PC version available on Steam (with nowhere near comparable graphics). It is an almost impossible game to recommend except to masochists with 20 euros to be squandered.

We have come to the end of this review. I recommend you take a look at The Witcher 3 on Nintendo Switch for a much more dignified port. If you want to stay updated on this and more, stay tuned to techigames!

4 We are not there

Unruly Heroes Review: Journey to the West in 2D ❯

add a comment of Ultra Off-Road Review 2019: Alaska, we're not there!