The release of the new DLC entitled Indie Friends was an excellent opportunity to recover a puzzle game like Tricky Towers, from which no one would expect anything, but able to reserve several minutes of pure and sincere fun. Let's find out in this review!

A glimmer of fun in a now saturated world

Before moving on to the actual review of the game, I feel compelled to go out for a moment from what are the classic tracks of an objective review intended in a pure journalistic sense. Because yes, a premise in this case is a must!

As soon as I got this title I was a bit skeptical about the approach to take to be able to review it at its best. The biggest problem is that I come from a period in which I buy various games with enthusiasm, but I end up not touching them again after a short time taken by boredom and repetitiveness and I was not sure that Tricky towers (not particularly fond of the genre) could reverse this trend. So my first thought was to let my XNUMX-year-old brother play to get feedback from those who, having seen fewer games than me, could expect something less from a paid title. After not even three or four games he played, he strongly urged me to play it together, sure that the videogame could give us hours of pure fun. So I accepted the invitation and ...

We tell you immediately because it is impossible to deny it, Tricky Towers is a fun, beautiful and nice game despite its simplicity. Obviously if you are a solitary gamer, it is absolutely not for you, but it is a perfect game to play in company if your aim is to have fun.


Tricky Towers is nothing more than a revisited version of the now historical Tetris, with the addition of physics on the various tetramine (the pieces that make up the tower). In fact, to the classic movement of the bricks, which move from top to bottom to stack and rotate on themselves, the possibility is added that these will get stuck with any obstacle and, if not wedged properly, they risk slip to the ground losing much of the tower you built. Brick physics isn't the only enemy you're going to fight against.

Reached certain heights of your tower, you will activate powers that can be in your favor, go against you, or against your enemy, unleashing the wrath of the challenger who is next to you. You can find yourself stacking bricks obscured by a thick fog, or you will have to deal with giant pieces, bricks with unthinkable shapes and pieces blocked by your opponent that you will not be able to rotate. 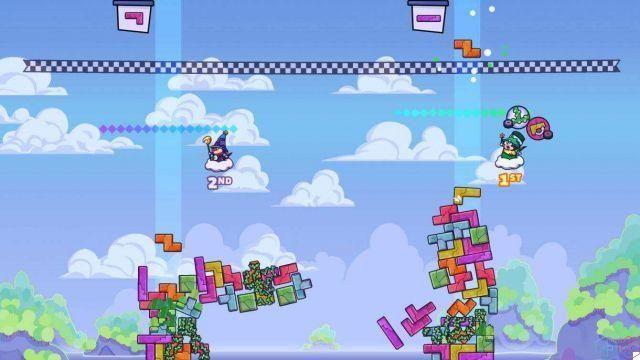 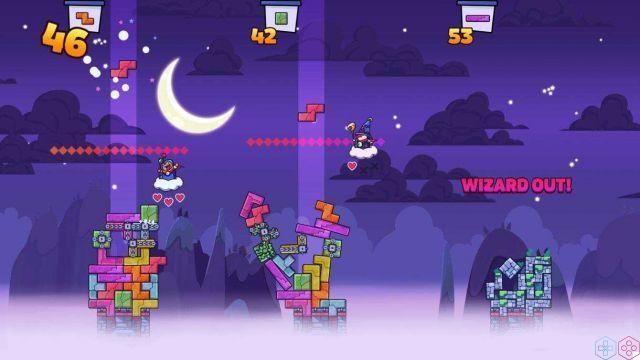 There are several modes in the game that will significantly change your approach and your style of play. You will have the opportunity to play in single player as well as in multiplayer is online and locally up to a maximum of four players.

Present as a basic mode a simple survival which, as previously described, consists in making the tallest tower having only three lives available, the puzzle mode, inside which we will have to try to stack the largest number of bricks within a very limited height and one competition mode (probably the simplest) which will see us intent on building a tower of a defined height without limits of time and lives.


There is also the possibility to change the degree of challenge between all these modes by choosing between a difficulty easy, a normal and a special which will insert the rain in our scenario, which will affect the tightness of our tower. 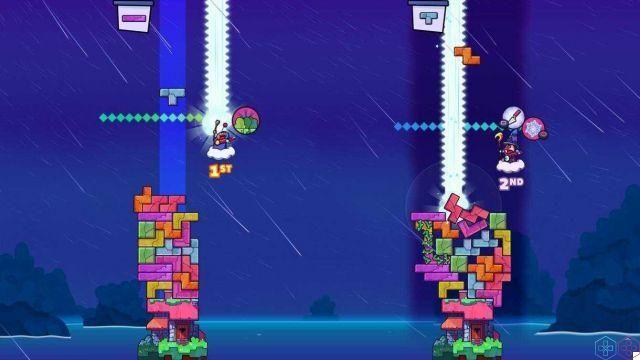 Un technical sector which clearly does not excel in an absolute sense, but which still manages to carry out its task ad excellent grades. Graphically, the game is absolutely pleasant to see, with lively and satisfying colors. Ditto for the sound compartment, very simple, consisting of a few beats but relaxing and great for the situation. 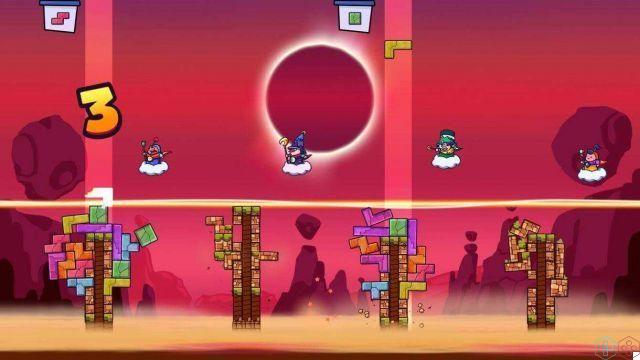 Il DLC “Indie Friends” it doesn't actually offer game mode changes, but consists of adding new characters which expand the choice of the avatar that will represent us in the game. Six characters have been added, coming from titles such as Octodad, Armello, Nuclear Thrones, Awesomenauts, Lethal League e Tower fall.

Tricky Towers: Complete and fun videogame at an affordable price

It is useless at this point to tell you that Tricky towers it is a title that we absolutely feel like promoting, without any reservations. Fun, great to play with friends and at a price of only 14,99 €, Available for PlayStation 4 e PC.