Pokémon Review: Let's Go Pikachu! Back to Kanto thanks to Nintendo Switch

By popular demand, the Kanto region and the first generation of Pokémon are once again the protagonists of a title of the main series: Pokémon Let's Go Pikachu! is now available on Nintendo Switch

When last May 2018 The Pokémon Company showed the world for the first time the project linked to Pokémon: Let's Go Pikachu and Pokémon: Let's Go Eevee, the whole world was amazed and suspended in a state of doubt. In fact, what did the players of the series have in front of their eyes? The long-awaited chapter of the main series for Nintendo Switch? A spin off? Or worse still (worse from their point of view, of course) a simple powered mobile Pokémon GO to land on the hybrid console of the Kyoto House?

According to a point of view that seems to us both positive and objective at the same time, Pokémon: Let's Go Pikachu turned out to be all these things put together from the start, but we naturally needed to be able to play it for a long time before we were completely convinced; the result is a nice and valid hybrid, just perfect for Nintendo Switch. Depending on how you want to approach the new chapter of the main series of The Pokémon Company, because whether you want to admit it or not this is exactly a new chapter of the main series, you could be enormously satisfied or deeply disappointed. Are you ready to find out in our review?

Pokémon: Let's Go Pikachu brings us back to Kanto once again in the company of the first generation of Pokémon: only the first, mind you, and this is one of the main limitations of what in effect, being a chapter of the main series, should also behave as such from a content point of view. Returning to Kanto for Nintendo means playing at home: why not make the long-awaited remake of the Fourth Generation of Sinnoh and think of a title that focuses exclusively on the fourth generation?


Because the first is perfect for proposing the iconic figures of the cover and the shared Pokémon imagery: there are Pikachu and Eevee, the latter extremely famous in Japan, and also in Europe, although not at the level of the electric mouse. 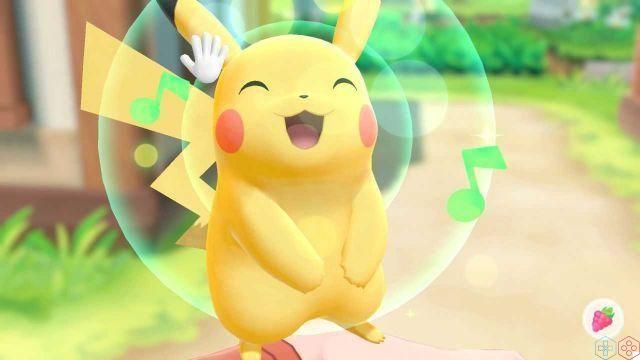 The Kanto of Pokémon Let's Go Pikachu is almost the same as always, rebuilt paying attention to the smallest details already appreciated at the time in Pokémon Red, Blue, Green and Yellow and then again in Pokémon Fire Red and Pokémon Leaf Green: something here and there it was changed and revised, but really the minimum: the result is a game that tempts the nostalgia of older players and is also able to attract all newcomers, who may have only been able to begin to appreciate the Pokémon series in recent years, only on smartphones and only thanks to Pokémon GO, the mobile title of Niantic Labs.

Once again within a title of the Pokémon series, the player will have to impersonate a Pokémon Trainer who begins his very personal adventure on the continent: will he be able to defeat all the Gyms, get the eight medals and become the champion of the Pokémon League? Of course yes, even considering a new practically non-existent level of difficulty and aid upon aid that from the first minutes of the game begins to arrive from all sides; but is it really that complex to enter difficulty levels for Game Freak developers?

The real big news of Pokémon: Let's Go! Pikachu is instantly identifiable in the gameplay. Every Pokémon game has accustomed us to looking for pocket monsters in the tall grass, weakening them with our team, then attempting to capture them. None of this with regards to the new games in the series for Nintendo Switch: first of all it is no longer necessary to wait for transition screens or appearances of Pokémon in the grass. The monsters, on the contrary, can't wait to jump out of the grassy patches or from the darkness of the caves to wander around the game map. But what will make lovers of the long-standing series turn up their noses will be the fact that it is no longer even necessary to weaken them: on Nintendo Switch it is sufficient to "aim" with your Pokéball and throw it at them. Where have we seen a similar mechanic before? On Pokémon GO.

Why after all it is impossible not to see in Pokémon: Let's Go! Pikachu a huge booster of Pokémon GO, or at least the implementation of some mechanics of the latter including capture phase, capture circles, Battle Points and berries. Berries are very useful to make the approach with a particularly strong or rare monster more affordable, as well as the inclination of the sphere and its launch with the right timing, which from time to time will reward with bonus points at the end of the capture phase. itself.

These points are used to level up your team with a minimum of effort, and we have repeatedly come to challenge a Gym Leader with really very strong Pokémon, which could make the challenge level even lower than it per se. is not normally. Therefore, if you intend to search for a particular Pokémon by capturing everything you see on the screen, we advise you to do it after placing the main team of your adventure in the pits: otherwise, before the fourth gym it will be able to take out the entire Bind Pokémon with very little effort. 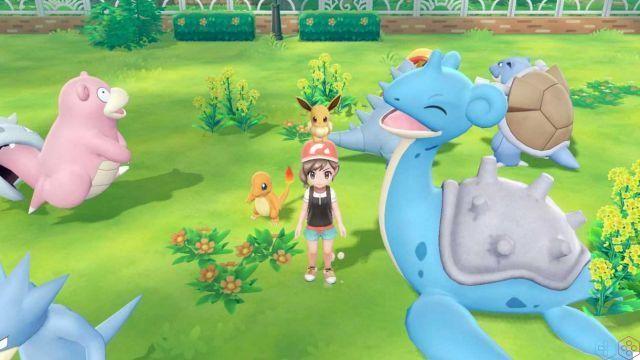 Right now you are surely wondering where the competitive game has gone within Pokémon: Let's Go, Pikachu! Unfortunately we must point out that the first full-style adventure on the Nintendo Switch of the series is devoid of any kind of competition: a minimal online challenge mode is of course present for those who will pay the subscription to the Nintendo Switch online, but you can safely forget the tournaments in style. Pokémon abilities are lacking, and that's saying a lot; missing a progression and a sensible enhancement of EV and IV, replaced by the mechanics of Caps and Candies, finally missing the possibility to breed Pokémon and hatch eggs. Clearly this is a game designed either for the great nostalgics of fifteen years ago or for newcomers in their first moderate and soft approach to the franchise..


Throughout this Pokémon: Let's Go, Pikachu! it can not seem like a simple title of transition towards the "big", full-bodied Pokémon Switch 2019 (which we hope will not slip to 2020, seeing how things are going). Only there will all the Pokémon generations be present again in the company of the new one, where Pokémon: Let's Go, Pikachu! features only the first 151 creatures, with mega-evolutions, Shiny specimens and Alola Forms. Technically speaking, the cartoon style is pleasant and particularly suitable for storytelling, but the polygonal models, the graphics and the cleanliness on the screen certainly do not scream a miracle.

Pokémon: Let's Go, Pikachu! marks the major arrival of the series on the Nintendo Switch, with a production however only partially successful. The titles of the franchise are always pleasant, just as the innovations introduced by those who cannot and should not be considered simple spin-offs for their own sake are pleasant and immediate. However, proposing a game that includes just 151 little monsters, devoid of competition and a serious graphic and technical update, and ultimately excessively simplified certainly does not honor all the potential that the series would be able to express; the simple nature of an experiment is evident, waiting for the (hopefully) much more full-bodied Pokémon Switch of 2019. However, it remains a title to be recovered in free time, as well as an important starting point for those who, up to now, have known Pokémon only by name.

add a comment of Pokémon Review: Let's Go Pikachu! Back to Kanto thanks to Nintendo Switch