We have had the opportunity to spend almost thirty hours in the world of Harvest Moon: One World and it is time to tell you about it in depth in our review.

The year that has just ended has been a downward spiral into the meanders of hell. Many of us have found in video games an escape, a certainty, a break free from a reality that really knew only bitterness. Last year, Animal Crossing: New Horizons came out in the best possible time. The Nintendo title has been able to give that breath of fresh air to all those who were locked up at home, with concern for the future. Simulators, in general, have this power: allow you to escape from reality. And it is just another famous series of simulators that we will talk about today, moving however towards another type: the Farming Simulator.

But let's not talk about the famous Giants Software series, but let's move a little further east. In the land of the Rising Sun, to be precise, with the titles of Natsume. We have already explained the events that led to the split between Natsume and Marvelous and the birth of two distinct lines of farm-sim, Harvest Moon and Story of Seasons, in an article that you can find by clicking here. Here, however, we would like to talk to you about the last chapter of one of these two series, more precisely that of Natsume, which has recently arrived as an exclusive Nintendo Switch in Europe. Welcome to Harvest Moon: One World review.

Everyone knows potatoes. But when you find yourself living in a small village, consisting of only two houses (seriously), where what you eat every day is based on potatoes, boredom comes pretty quickly. The protagonist of Harvest Moon: One World, whose appearance you can quickly create choosing sex and color of skin, eyes and hair, it had to wait several years of life to finally change its flavor. One day, in fact, accompanied by his childhood friend Doc, he finds himself living a situation out of the ordinary. Looking for potatoes to take to his mother to prepare dinner, he will come across a sprite who will give him a seed.


Next, we will meet Vitae, another sprite who will explain to us how in reality the world of Harvest Moon was previously full of fruits, vegetables and flowers. The Harvest Goddess, however, has lost life force and, to return to give it to him, we will have to awaken five other spirits and collect their medallions. Thus we set off on an adventure that will take us to explore five different regions, meet many non-playable characters and learn a lot of knowledge about managing a farm. 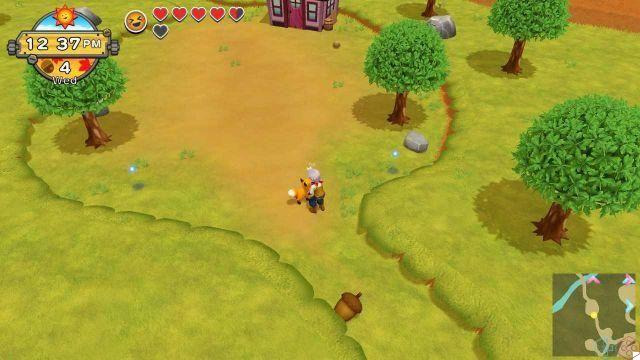 However, there are big differences from the past and the titles of the Story of Seasons series, with which Harvest Moon: One World will return to face later this month, when Pioneers of Olive Town will be available. This is because, if until today in Natsume's titles the activities to be carried out in the fields and in the management of the animals have been central, in One World the situation is slightly different. From the very beginning of the adventure, in fact, Doc will give us a gift of what is in effect one "Portable farm". In the game world will be scattered, in strategic points, some robots that will indicate the places where we can "expand" our base. To be able to move, just donate enough fruit and vegetables to the robot on our base, which can then be compressed.

Certainly an original idea and one that wants to cut ties with the stylistic features of the past, but which could diminish, in the eyes of many, the playful experience strictly linked to the management of the farm. The latter will in fact turn out to be, in One World, more a simple base to return to once the day is over to deposit what has been collected around the game world, more than a real home to manage. And, net of our experience, this is a real shame. Because if there is one thing that really works in One World, and perhaps the only one, it is the management of crops and animals, which has been greatly simplified, but which gives a lot of satisfaction. 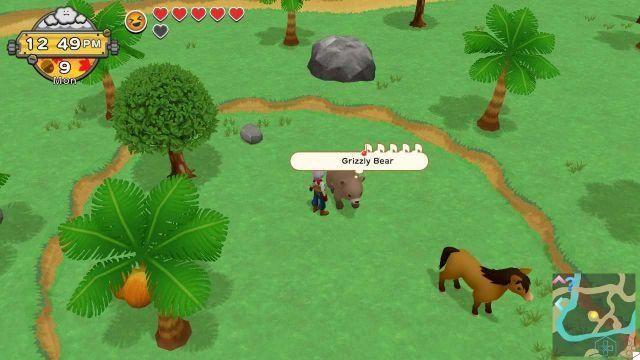 Compared to the past, in fact, when you will work in the fields or take care of the animals you will not have to select any specific tools from the menu. Just have it in your inventory and place yourself in front of the desired piece of land or cow, press A and the game will guess by itself the command to execute. A perhaps excessive simplification, this is true, and that takes away much of the managerial depth of the previous titles in the series. But we assure you to get up in the morning at 6, leave the house and tidy up the crops, brush the horses and milk the cows. it will give a strange feeling of calm and tranquility that we have been able to really appreciate. And let's stop here.

Natsume has in fact tried, with Harvest Moon: One World, to give the series a push towards the exploration of the game world. Failing to a large extent, we can already tell you. In fact, if the five explorable cities are all quite different from each other, both for narrative and for climate, this does not mean that the game world itself is flat, dull and soulless. This from the first available area when the game, through one of the many useless tutorials, will invite us to explore to help the residents in the city and find the various sprites, represented by bright dots, to collect the various seeds. 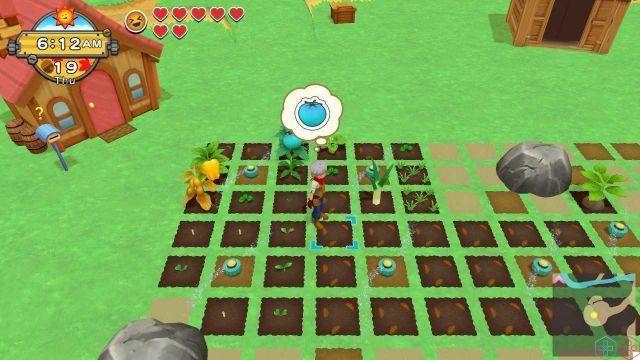 Aesthetically speaking, Harvest Moon: One World is not just a low-budget title, but something you would expect to find on mobile. We admit that the sprites of the characters that you see in the dialogues are quite accurate and detailed, but everything else is a bit 'too far below the threshold of "we had no money". Exploring the game world will mean traveling first on foot, then fortunately by horse and teleport, long bare and empty corridors, if it weren't for a few trees every now and then. And considering that walking in these environments will be the thing you will do most during the game experience, it is impossible to deny that Natsume should have done more to make it more palatable.

There are many secondary activities that you can undertake in Harvest Moon: One World. In addition to the classic fishing or searching for materials in the mines, you can participate in numerous festivals that you will have to help organize gradually in the various cities. Between horse racing competitions and fishing tournaments, you will really have a lot to do. There are also numerous secondary missions, which will however be almost all trivial fetch quest. In this case, the possibility of using the world map for find specific seeds for a particular request, in order to avoid wasting hours and hours of play looking for a seed in the wrong area. 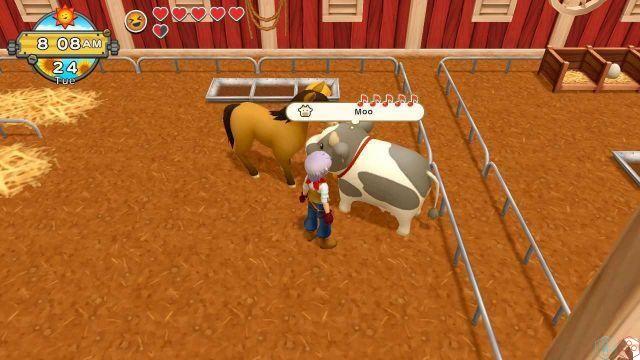 Another point that Natsume made a big splash about in the Harvest Moon: One World presentation is its dating sim component. Whether you choose a male or female protagonist, you will have five suitors to choose from to start your flirtation. The easiest way to increase the affection of your other half will be to obviously give him gifts, and we advise you not to always use the same yellow pepper collected in the morning.

Unfortunately, however, net of everything, too maximizing your relationship with the chosen character won't lead to anything special. The lucky one, in fact, will not undergo such an epochal change since you met them, and the dialogues will change just for a few lines and nothing more. 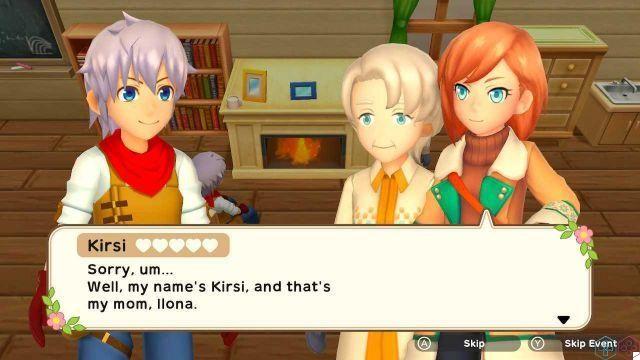 In this review we have already pointed out how much Harvest Moon: One World is a low budget title, but for this very reason we expected it to run fairly well on the Nintendo Switch. And instead it does so only partially and only at the level of stability. In the course of the nearly thirty hours we spent in Natsume's title, in fact, we didn't experience any crashes or heavy slowdowns, except in some situations. However, the title suffers from some graphical glitches that you will notice especially when riding, when the software should load the game map faster. In these cases, in fact, you will often see the corners of the black loading zone map, which in addition to being unsightly are really inexplicable for a title with such graphics.

Let's add NPCs that disappear and then reappear as if nothing had happened, or that they are not really loaded unless you take a few steps back and you will understand that perhaps a real optimization was missing. From the point of view of the soundtrack we do not have much to say, the various background music present are without infamy and without praise and attest to the standard of productions of this genre. Absent any form of dubbing, while the title is completely in English. 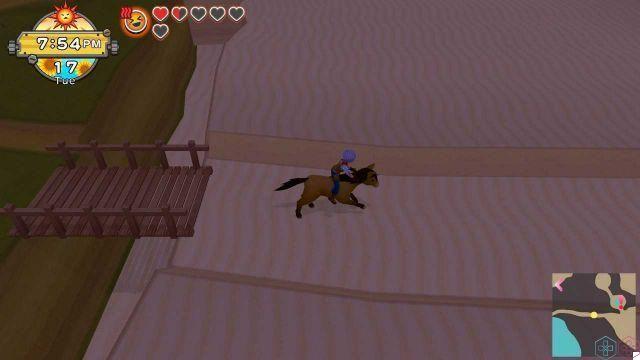 Ultimately, to wrap up this review, Natsume attempted to relaunch a stumbling series with Harvest Moon: One World, but failed. Leaving aside the really too simplistic and dated technical sector, the emphasis on exploration that the company wanted to add to Harvest Moon has not given the desired results. We must admit, however, that the simplified and adjusted farming component to be as fast as possible has captured us and made us spend moments of absolute tranquility and placidity along the thirty hours we spent in One World. Perhaps this wave of change was not so necessary?

Stay tuned with us at techigames for all the videogame and tech news! And if you are interested in game keys at advantageous prices, we recommend that you take a look at the InstantGaming catalog!

Haven review: love on the run and gliding on PS4 ❯

add a comment of Harvest Moon review: One World, wind of change