Gloomy afternoon? Developed by Fabio Ferrara (Spanish, which responds to the name of MalboM on Steam) and published by Chubby Pixels, I present this video game on a gloomy day. I install and go on my adventure. Yes, because it is an adventure.

The introduction to the game mechanics turns out to be hasty. I started with a mouse and keyboard, only to find myself after a few minutes holding a pad for comfort.

I would like to tell you about Woodle Tree 2: Worlds proceeding by sensations, avoiding to get entangled with the classic parameters that, frankly, would massacre this product.

I was saying, start the game and I immediately find myself with a very short video in which it is me (the one on the right) and a fox (?) making tea bags. At a certain point, the tranquility of the situation fails due to a terrible presentiment: evil is invading our planet. Thus, the protagonist decides to postpone the pleasant afternoon with the fox to leave his tree house and start the adventure.

Feeling 1. So I find myself moving the main character in a vast colorful world. From the very first moments (as 80% of us act), I press any key on the pad to understand the type of platform I am dealing with. There is a button to jump, one to "hit" with a leaf and throw a water bubble (?), And a button to put the aforementioned leaf on your head that we will carry with you throughout the game.


I start to explore and I find myself in front of a very intuitive Tutorial, which explains to me what I discovered a few minutes earlier, going around the map. 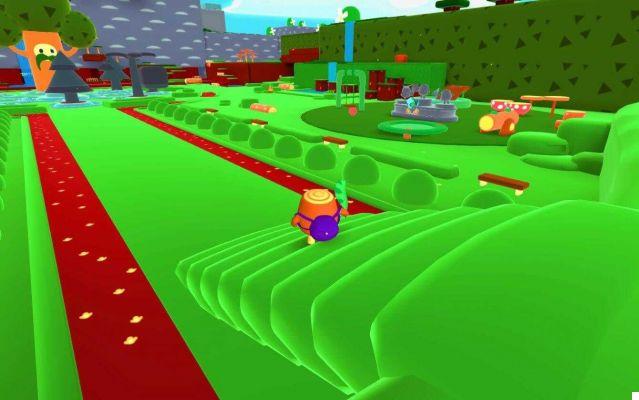 The music, the colors and the movements they remind me of Super Mario 64. The feeling you get is that you are dealing with a colorful and joyful platformer. Mind you, I'm talking about feeling and the differences come up early, but I felt like I was dusting off those old emotions and going back in time.

Feeling 2. Immediately after completing the little tutorial, I am launched on an adventure in the game world. I quickly reach a height and start looking at the view. I have a feeling that reminds me so much of Minecraft and the vastness of the game world presented. Here, of course, we are not dealing with a procedural engine, such as the one that generates the infinite worlds of Minecraft, on the contrary, the game world is over and you can get a feel for the map by pausing the game.

Screens and Options? What are they for? And it is precisely when you press "Start" to pause and see the map, that you will have a minimal menu in front of you: you can exit the game, resume, decrease or increase the sensitivity of the mouse (this is the first thing you will have to do if you play with a pad) and you will be able to observe the fruit counter that you have collected during the game.

The purpose? In fact, this is a question that has long since been eliminated and bypassed by the modern gaming market. The beauty of indie products is just that: they offer you a product and you can enjoy it the way you want, playing as you see fit, for no apparent reason.

“Woodle Tree 2: Worlds is an Open World Adventure video game. This time the forces of evil are taking over the world of "Wood Land" with a black substance that absorbs energy from living creatures! Will you be able to take over this new evil force? "

But frankly, rather than fighting the "new force of evil" you will prefer to make trips to this colorful world and explore the different scenarios proposed. I am not attaching the map between the images, simply because I want everyone to go and explore and guess the main reason for each setting.


Music & Colors. I'll come back to the subject again, but I'm one of those who loves music and colors in video games. Woodle Tree 2: Worlds has character, for that very reason. I see colors and music that ties everything together, putting the player at ease without a minimum game screen, with statistics and more. There is practically no so-called gaming hub. There is also no counter, no energy or charge bar. Nothing. Only you in a big game world.

Unfortunately though, there are some bugs, that could, and clearly do, annoy.

For example, sometimes the shots penetrate into surfaces, letting us see what's behind them. Or it is not always possible in CO-OP with a friend, or when fighting an enemy, the combat is not always fluid. But having said that, the game is very usable.

If you were a parent, Woodle Tree 2: Worlds would be the perfect game. I would feel totally comfortable in making a child move in this play environment, stimulating the spirit of exploration and research.

If we take this product and see it from this point of view, it turns out to be a small masterpiece, made by an independent editor. We must not judge a game of this kind with the canons that we will use to weigh an FPS, rather than an RPG. For this reason I feel I can give a nice ...

Woodle Tree 2: Worlds is like being a child again and having that desire to discover a world that, with its enemies and its evil, still turns out to be beautiful in our eyes.

WRC 7 review: when the rally becomes a hybrid ❯