The souls-like welcome a new game, Decay of Logos, but nothing seems to have gone the right way: here is the review

Decay of Logos, the new "souls-like" arrived on PS4 (version we tested), PC, Xbox One and Nintendo Switch last August 27, is many things but, first of all, it is offensive. Decay of Logos is an offense against gamers, against the genre and towards all those developers who, even with few resources, try to have their say, in a reasoned way, perhaps not achieving great results, but showing that they have at least tried. We are sure that the developers did not want to insult us, but the result is just that and we can not fail to take note of what is in our hands. 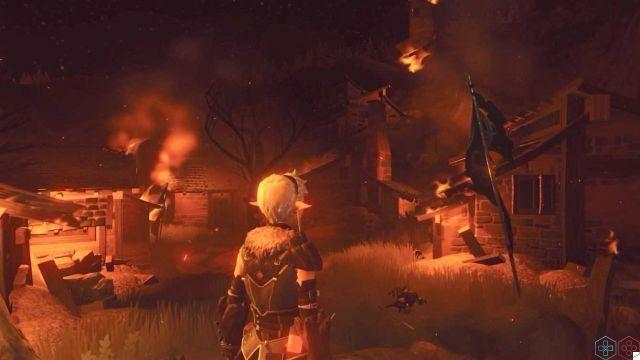 What are we talking about? - Review Decay of Logos

But let's take a step back and try to see exactly what it is. Decay of Logos is a third person action game, which draws both hands from the young but now mature vein of souls-like. As a girl, we witness the destruction of our village. Left with nothing, the only survivors, we begin to wander aimlessly together with a white moose (or is it a deer?) That appeared in the flames that razed our birthplace to the ground.

Like any self-respecting souls-like, the young woman can equip a melee weapon, a shield, a bow and a set of armor, as well as vials of potions, equipped with various effects. The basics are always the same: light attack, heavy attack, dodge, run, jump, parry ... all actions that consume stamina. Too bad every detail is completely wrong. Let's start by stating that the work suffers from a general input delay, absolutely unacceptable in any case, but deadly in an action game. The combat animations of both ours and, above all, of the enemies, are not well synchronized with the hitboxes, causing the girl to be hit out of nowhere, while an enemy is moving at random.


Furthermore, opponents are completely based on tracking, that is, they rotate completely on themselves to hit you even if bypassed. You should try to avoid hits with dodging, but even then the animation, input delay, and tracking make it useless to do so. Since without a shield it is not possible to parry (and there are no shields in the first areas), we will have to get used to hitting the enemy, taking a few steps back to avoid attacks, approaching again and striking, and so on in repetition, at a rhythm unnecessarily low, also due to the stamina that recharges with a disarming slowness. There are times when you just have to stop playing, and wait, without even fearing opponents because simply walking is enough to keep them at a distance. 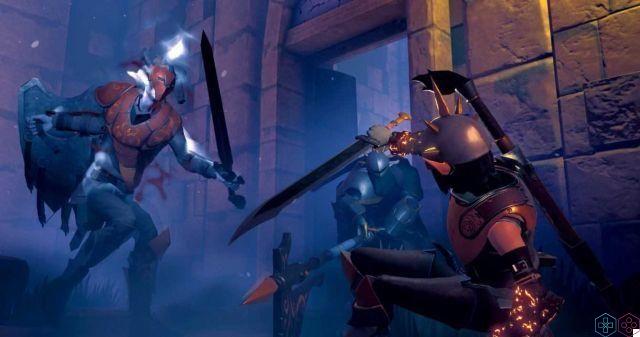 Attack after attack we will take down the opponent, but there is no fun or satisfaction in doing so. Furthermore, this discourse is valid only if we are able to attract one enemy at a time: the groups, especially if from three or more, are absolutely unmanageable and further slow down the fight, since we are forced to reposition ourselves taking into account more enemies and we can attack only in the moments when we are not within reach of most of them. The animations have in fact a huge recovery time and missing the opponent or attacking having more than one around means committing suicide.

Finally, the parry was made by a person who watched a video of the gameplay of Dark Souls, but did not understand anything about what he was seeing: in fact, it blocks the opponent's hit, but it does not give any additional bonus and, on the contrary, it involves a series of enormous disadvantages; using a parry will consume a lot of stamina, it will damage the weapon, it will put us at risk of damage in case of failure and it will not allow to activate any critical damage: the next attack will do normal damage.

Even if we pretend that the purpose of the game is to approach opponents in a reasoned way (but we assure you that this is not the case), there is another problem: the enemies do very high damage. Also, by moving from one point to another on the same map, perfectly identical enemies (ah, there are very few enemies and they are repeated over and over again) have completely different stats, without your knowing. If you shot them down in three shots about ten meters before, now you need seven or eight, and a single punch in the face is enough to knock you out. Furthermore, taking damage, or even dying, causes our stats to suffer an extremely substantial temporary penalty, which continues to accumulate.

To heal the damage it is necessary to find a place to rest, while to cancel the temporary malus it is necessary to sleep in these special places. However, there is a problem: randomly, it is possible that the rest is not successful and the character is ambushed at night by a group of enemies of absurdly high power. Considering that if one activates the rest he does it because he has a character seriously weakened by the malus and considering what has been said above about the fights against groups, you will understand well that a night ambush (and therefore with very little visibility) means death. From the first attempt you will understand that the only thing to do is to be killed and try to rest again: even a failed rest heals a part of the malus, so in the worst case the solution is to rest indefinitely, undergoing useless ambushes to the bitter end. . 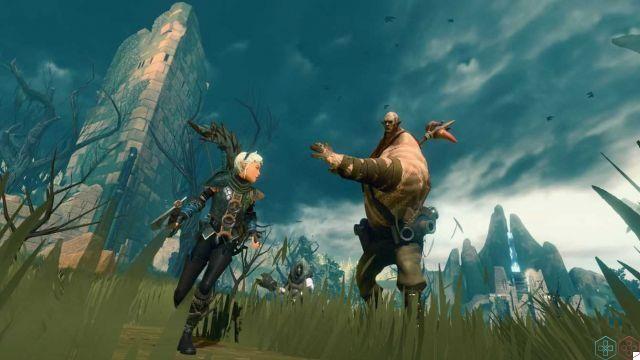 Furthermore, it is not possible to advance while ignoring the enemies, as they will chase us endlessly. The slowest ones will get lost, but those with a standard speed will be able to keep up with it, catching up even if we had to shoot (stamina is low and slow to recharge, remember). It is therefore mandatory to eliminate every opponent, again and again. This problem is compounded by the fact that resting places are very distant from each other. In fact, there is another safe place, a generic checkpoint, which we will have to activate. It will become the place of respawn in case of death, but it does not allow us to heal damage as a resting place or even sleep to eliminate the malus. In some cases it becomes negative to activate them, since after a few deaths we will still have to return to a place suitable for sleep to eliminate the malus (two or three deaths lead to the halving of the statistics).

We also add the fact that the equipment breaks easily (not the weapons, thankfully) and that the inventory is on the deer (or is it a llama?) And not on the character. That's right, only equipped items can be transported: if you find another helmet, for example, we have to replace the one we're wearing or go back and forth from the lama (or is it an impala?) To deposit the equipped item and then return to collect the one found in the casket. Also consider that often the impala (or is it a zebra?) Cannot reach the place where we are, since a minimum difference in height or a ladder are insurmountable obstacles for a quadruped. The zebra (or is it an ibex?) Should also be used to move (after obtaining berries to feed it to tame it) and to solve puzzles based on push buttons, but its AI is completely broken and it easily fits in. every corner. Riding it is a pain, since the character walks faster and the ibex (or is it a wildebeest?) Has a driving system created by a drunkard. 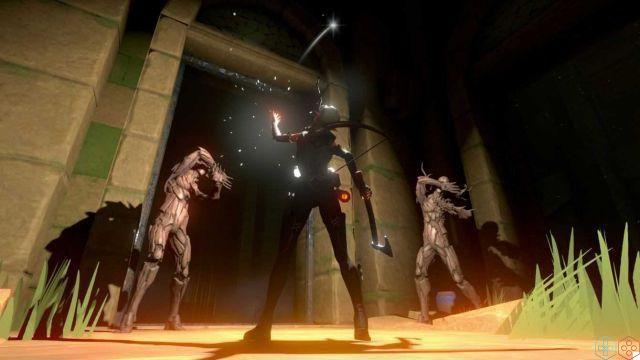 Let's add that the management of life points and heals is absurd. In addition to the fact that, as mentioned in the course of the review, the enemies in Decay of Logos do senseless damage and that, moreover, this involves a lowering of the statistics (with a consequent increase in the damage suffered, as the defense drops), the character has a small number of treatments are available or, if bad luck haunts you, none at all. There is no refillable "Estus flask", only disposable potions to be obtained by eliminating enemies or breaking wooden crates. Too bad they are very rare. Even if you want to be stubborn in not using them to accumulate them (and this means having to complete an entire area by suffering a maximum of one or two hits from the enemies), the maximum number that the character can carry is five, such are the potion slots, which are also shared by bottles with other effects, such as a poison cure, weapon fire buff, and the like. Using the wildebeest (or is it a mule?) As an inventory is essential, but as already mentioned it means having to go back and forth from the point of the enemy drop and the dear animal (or is it a useless being to be abandoned as soon as possible?). Ah, there are spells that must be activated by sacrificing life points: you understand why it is meaningless.

We conclude the examination of the gameplay by stating that it is not known how and in what quantity experience points are obtained (once we did a level up by opening a chest, so to speak). Leveling up gives a bonus to all features, but even simply by fighting you get definitive bonuses (it is not clear according to which rules, so it cannot be managed by the player). In any case, the feeling, between damage inflicted and damage suffered, is that everything is handled at random, without any search for balance. It is not a hardcore game, it is a random and completely broken game.

Bugs come in too

If all this were not enough (and honestly it would have been enough for us), know that the game is completely bug-ridden, even after various patches. The character freezes randomly when opening the menu, the prompts for collecting objects glitch and it is not possible to collect anything from the ground (the only way to cancel it is to exit and re-enter, with the consequences of canceling the objects on the ground). The game loads polygons and textures with difficulty, freezes and then throws the character a few meters ahead: if you find yourself near a wall, while it happens, maybe you pass through it, just hope there is an area beyond it. There are characters with quests, but you have to hope that a bug doesn't block the PC's dialogues, preventing progress. The frame rate, in a few moments, is equal to that of a series of slides on a XNUMXs device that jams every three photos.

To conclude this review, Decay of Logos is, in essence, a box into which the fundamental points of a souls-like have been thrown. The developers shook the box, mixed the contents, and then spilled it on the floor at random. Decay of Logos is a clear example of how not to make a game. There is literally no reason to pay for it and take the time. Run away fools.

2 To be avoided at all costs