The review of Toukiden 2, a hunting game with RPG mechanics. New challenge to Moster Hunter? Let's find out!

Toukiden 2 has arrived. Modern hunting games with RPG mechanics there are not many. Indeed, let's say that until a few years ago there was only one: Monster Hunter di Capcom, which marked a genre. The Omega Force released their first Toukiden on PS VITA precisely to win back a slice of the market, and they saw it right. So much so that in three years two successors have been published: first Toukiden Kiwami, which is nothing more than a re-edition for PlayStation 4 and PC of the initially portable title, and now Toukids 2. And with Toukids 2 the team has aimed higher, deviating towards the action sauce and a strongly more pronounced narrative component than the Capcom counterpart. From (almost) plagiarism, in short, to a respectable identity, which we will now tell you about.

The fact that Toukids 2 was announced during the Tokyo Game Show 2015 is saying something: not as far as the date is concerned, given that two years of development for the title developed by Omega Force are enough and probably advance. Rather, the presentation area makes us reflect well on some dynamics of recent years, which have seen more and more titles initially conceived, grown and developed in the East spread like wildfire also in our country, also conquering a certain group of loyalists. The Danganronpa and Persona series are just a few links in the chain.

Well yes, contrary to Monster Hunter and unlike both the first Toukiden and the Kiwami reissue, Toukiden 2 amazes everyone with a respectable narrative component. Except for the classic clichés of the case, between time travel and "you are the hero that everyone has been waiting for, why yes", there is no shortage of real twists that have been fairly successful. The Campaign mode is divided into 7 chapters interspersed with a myriad of sub-missions (rather similar, however, to each other).


The first thing that Toukids 2 asks us to do is to use a simple editor for character creation, a demon hunter who finds himself fighting the terrible Oni during the "Awakening", an event that occurs in the setting of a feudal era Yokohama and sees the invasion of hellish monsters in the streets of the city. This is another big difference with Monster Hunter's “naturalized” creatures: in Toukiden there are demons, ugly and evil and infernal, not animals of different sizes. 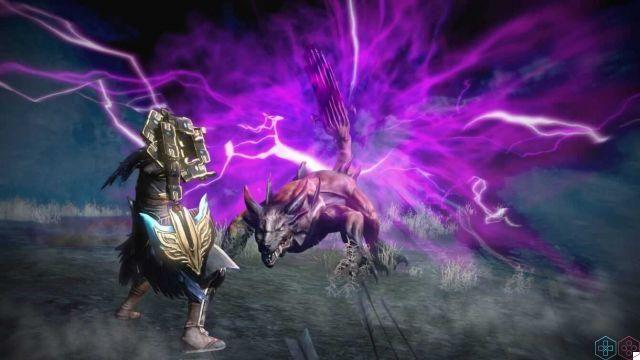 Swallowed by a mysterious vortex just when the final battle was reaching its peak, the protagonist of the adventure finds himself projected ten years into the future, devoid of memory and in another area of ​​Japan, where he meets a young scientist who has obtained important results in the field of technologies useful to face the threat of demons: the eternal clash begins between the Machina, sentient androids and the Demon Hand, devices that allow hunters to emit a claw of energy against their enemies to hook them weak points and quickly project the attack.

In the role of our anonymous protagonist querriorero we will first have to gain the trust of the village leaders by completing a series of simple missions against the imps that infest the district, then receive a Demon Hand and fight with increasingly powerful enemies, exploring the map together with three companions (controlled by artificial intelligence or by as many human players) and gradually unlocking new territories in the perspective of a rather vast open world, but also in some aspects tremendously empty and monotonous.

Toukiden 2 does not only have a renewed (and previously absent) narrative component of all respect by itself: it is also a fairly large open-world when compared with the productions of recent years, and which, at their equal, flaws above all in the filling of the locations. The latter are either decidedly bare and contain incredibly repetitive secondary missions: and in any case they are all anonymous areas and all too similar to each other, also from the point of view of the scenography and settings.

The game mode with which we will have to immediately become familiar and that will guide us until the end of the title (as well as in multiplayer and post-game) is that of team fighter: Armed with three companions and dangerous ammunition, you will descend into the wilds of Japan to slaughter demons, collecting their loot and interesting body parts to upgrade your paraphernalia and equipment.

Do not sing victory too soon: the team will be managed by artificial intelligence and it will not be possible to face the Story mode in the company of three friends, a questionable but unappealable choice of the development team. Starting from the initial center you will head to the various "zones" of the title, each characterized by certain types of flora and fauna and articulated in various sub-areas connected to each other, in the exact same way as Monster Hunter. The difference here lies in a little more incentive to the exploratory component between one area and another, between one game environment and another.

It increases, compared to Kiwami, out of all proportion the amount of weapons at our disposal, which will, as always, be divided by type. Each type of weapon has a unique fighting style, with specific combos to make everything even more interesting: in addition to broadswords, double daggers and the inevitable spears, we will find in our arsenal various types of very particular weapons. We cannot fail to mention, for example, the fearsome bow, a ranged weapon with impeccable precision, not to mention the rifles, devastating both from long and medium distances, but obviously not very suitable for close encounters. 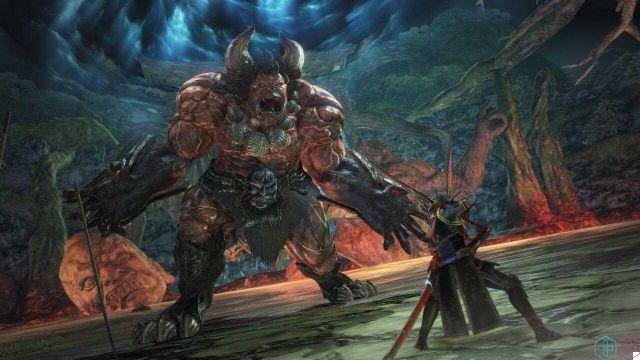 Following the classic dynamics of the series, also in this second chapter it will be possible to cut and "assimilate" some parts of the body of large demons. An indispensable tool for obtaining specific parts or, more simply, for exterminating creatures in the shortest possible time. The infamous "rite of purification" also returns, another small difference compared to Monster Hunter. Once any part of our enemy has been severed, it will remain on the ground, wrapped in the "miasma" waiting to be purified and only after completing the rite will we actually accumulate the objects it contains. A very minimal difference on paper, which however has a huge impact on the gameplay and strategies of the team.

From a technical point of view Toukids 2 it's a mild attempt to make a decent first home version for the series (Kiwami, after all, was still a port). But even the sequel unfortunately remains mostly close to its nature as a portable game rather than to the characteristics of PlayStation 4, with graphics that run at thirty frames per second but suffer from drops during the most agitated phases (just like in Toukiden Kiwami, therefore no improvement on this front) and uses very generic assets, which determine a certain lack of personality. We have tried the version PC of the title, and honestly we stayed disappointed with performance.

But what is good has to be said, and there is a lot of good in the personalization, definition and characterization of the cursed demons known as Oni, portrayed and executed in an optimal and charismatic way. The music is also excellent, with themes that effectively emphasize the various situations: it's just a pity that some songs, repeated endlessly during the phases in the village, end up becoming detestable even after less than ten hours of play.

Trackmania 2 Lagoon review, an arcade tour in the lagoon ❯