The Falconeer review: an authorial question

The Falconeer is the intriguing title developed by Tomas Sala for PC and Xbox platforms: let's discover its qualities in this review

The world of indie video games continues to acquire a prominent role within the industry. In a period in which high-budget products are beginning to no longer be sustainable, the smaller titles still succeed in the task of offering the user a more original and above all complete approach to the development of a work. Far from microtransactions and other nefarious market needs, it is in the work of smaller authors that you can find that taste for playful and narrative experimentation which fifteen years ago, it seems to us, was much more common.

And precisely in this case it is necessary to speak of authors. The game we are going to analyze today, in fact, was developed by a single person, a particular event that takes us back in time, when, for one thing, Richard Garriott locked himself in his garage to develop the first titles of the Ultima series in complete solitude. The Falconeer, therefore, is truly an authorial game, in which the creator Tomas Sala has certainly put all of himself: let's find out together how it went in this review.

It goes without saying that, although Sala has dealt with the purely visual and playful aspects, as regards the sound sector he has gladly accepted the hand of other collaborators. However eclectic an artist may be, he will never be able to really do everything, let's give it to him. Even the publication of the title takes place thanks to Wired Productions, which took care of launching the game on Steam and the family of platforms Xbox (also comes out for the older generation of Microsoft consoles).

The release in conjunction with the new generation of consolesHowever, it could make survival difficult for Ursee's flying hawks, given the plethora of interesting titles with much higher production values ​​arriving on the market these days. Will some interesting ideas and a good artistic direction be enough to make up for the economic shortcomings? The outcome is not as obvious as one might think.

Let's find out together in this review of The Falconeer how beautiful it is to sail the seas of Ursee from above. 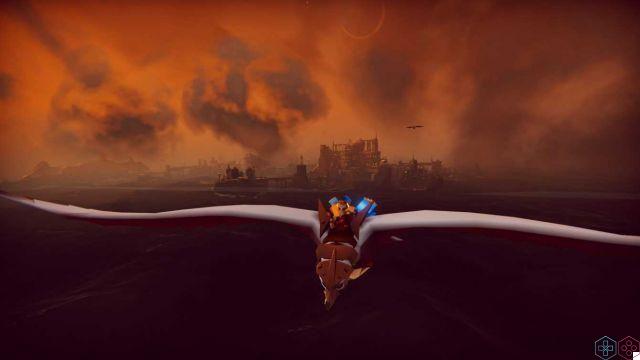 Above Sea Level - The Falconeer Review

As we will see in this review, The Falconeer doesn't make much effort to accommodate the careless player. In fact, by the author's will, his narrative appears to be cryptic and polyphonic, with an evident effort to put the beautiful setting in the foreground compared to the numerous characters that will make up the events. The world of Ursee, in fact, is certainly the most successful aspect of the entire production and it is enough on its own to keep the player glued to the screen just enough.

Submerged by a huge ocean, Ursee has no continents, only small atolls inhabited by different social and political groups. The main events see the Empire clash with the Mancer order, which holds the possession of ancient technologies. As in the best fantasy tradition, however, within the story other minor entities will eventually intersect, like the house of Borgia (yes, just like those there) or the small group of mercenaries that we will be part of during one of the six campaigns in the game.

In fact, the progression of The Falconeer is also polyphonic. We will initially be able to choose between two different campaigns, completing which we will then unlock the following ones. Each time we will be asked to create a new falconer (for the whole game, in fact, we will be on board a beautiful and gigantic war bird of prey), choosing between different classes each with different statistics. From there, we will start to deepen the playful and narrative events of the world imagined by Tomas Sala.

The Grande Ursee, the vast expanse of sea where the two factions collide with each other, is the true protagonist of the title. Exploring this vast ocean and deepening its culture, you will be able to discover many small historical and political details capable of making it a compact and coherent world. The choice to tell the story from different points of view might initially seem confusing, but it is precisely the work of reconstruction and conjunction that the player will have to put in place to be satisfactory.

From the beginning we will be free to go around just about anywhere, accepting side missions here and there, earning some money and obtaining permits to trade with other factions further away from our base. All this always happens in the saddle of our war hawk, so it will not be possible to visit the various cities and camps in which we will come across on foot. The descriptions in the game map, however, managed to capture our imagination.

If, while playing a game, you have ever stopped to observe a background in the background wondering what was in that world, as well as what the player could actually visit and see; or if, more simply, you did it with the landscapes of any painting, then you will find bread for your teeth in The Falconeer. THESala's greatest merit was in fact that of telling many things without saying anything, and to make the user travel with the power of the imagination alone. One thing money can't get. 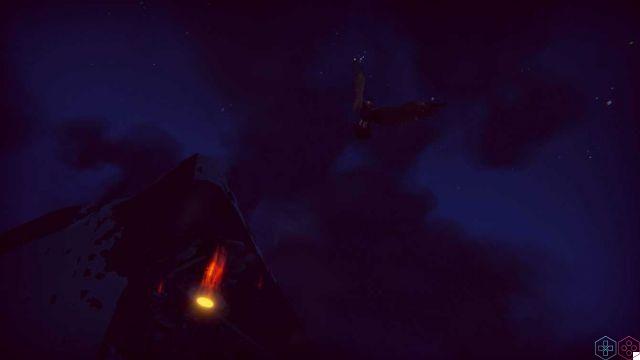 Not that The Falconeer is no fun. Far from it. For much of the game we will have to fly over the seas of the Great Ursee on our beautiful war hawk, through a very arcade flight system that brings to mind, thanks to the ability to rotate the camera, that forgotten gem of Crimson Skies. In addition to firing our weapons, we will also be able to perform graceful pirouettes and grab any objects scattered here and there in the sea.

The skies of the Great Ursee are also littered with storms and drafts which will give us the first opportunity to reload our ammunition, the second to launch into the air at great speed. Even going down in a dive, the pace of our mount will increase, allowing us to use a sort of acceleration for a while that will come in handy both during the clashes with the opponents, both during the long crossings that we will be forced to perform.

The Falconeer works when it comes to fighting. Whether against other falconers from another faction or against ships and airships, the enemies are fun and the situations they create stimulating. There is a basic problem, however, which refers to the open world structure conceived by Sala, which is unable to overcome a certain monotony of the actions to be performed.

Basic the game rewards whoever decides to get away from the main mission for a while, exploring other cities and completing a few secondary objectives. By earning money we will be able to buy special permits that will guarantee us access to trade with other factions and also to new pieces of equipment for our pet. So far everything is fine. Ursee is great, its views are wonderful and the freedom granted to the player is really great. More, the polyphonic narrative we talked about above marries beautifully with the idea of ​​a freely explorable map.

What undermines the title quite clearly is therefore the reduced type of tasks available. Mostly it will involve carrying cargo from one port to another, escorting a ship, destroying a specific target and little else, with some variation along the main plot but not enough to vary the formula sufficiently. It follows that The Falconeer is solid, but will hardly be able to keep the player glued for very long sessions. Our advice is to taste it in short sessions, but we believe that much more could have been done. 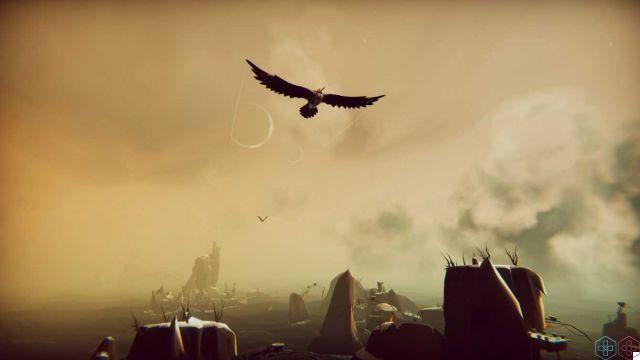 A painting in motion - The Falconeer Review

The Great Ursee is, as we said, the true protagonist of the work. In a world dominated by different points of view and in which the weight of the individual is reduced compared to the great current of history, it is clear that what will remain most impressed on the player will be the setting imagined by the Dutch developer. Spread your wings and arrive in the middle of the Maw - a rift that divides the great sea in two - observing the Mancer settlements submerged by these surreal waterfalls it is a show that takes your breath away and makes your imagination fly.

The aesthetic style is the dry and simple one of many self-produced titles, but his artistic direction reminds us of the splendid sea of ​​Thieves crossings. Even in The Falconeer we will sometimes be forced to travel long distances in the middle of nowhere, letting ourselves be lulled by the sound of the wind and the soundtrack inspired by Norse traditions. A title that therefore lives on empty spaces, and which for this reason is often a courageous experience.

Technically, despite the not very high polygonal size, we feel like rewarding Sala's work. The title is beautifully optimized and manages to sustain 120 frames per second without batting an eye, assisted by a very successful aesthetic and by a sound sector quite successful also as regards the dubbing of the various characters that we will meet during the story. 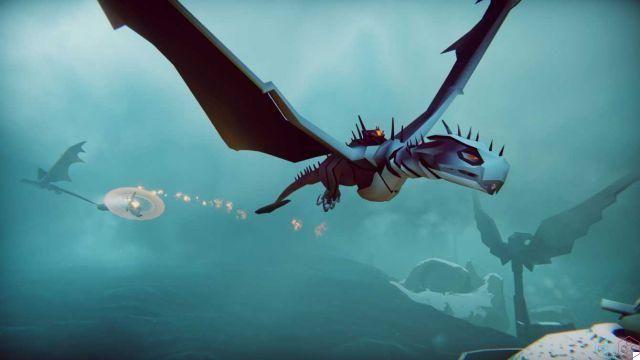 A story to be filed

Like many first films, The Falconeer appears to have some aspects to improve, but in this review we have decided to reward their genuine spontaneity. The consistency of the gameplay and the game world are combined with a polyphonic narrative much deeper than expected and gives us a setting full of historical significance.

Some flaws in the title structureunfortunately, they undermine the quality of a work that is as courageous and free as the hawks that ply the skies of the Great Ursee. The result is to be accepted as a whole, loving its artistic and playful qualities, because it is able to give a lot to the player who decides to approach it in the correct way. And also because it really is an authorial game.

Will you try The Falconeer? Let us know in the comments and stay on techigames for more articles on the world of video games.

add a comment of The Falconeer review: an authorial question