Tandem Review: A Tale of Shadows - The gravity of light

In this review we will go to see Tandem: A Tale of Shadows, a game as peaceful and surreal as it is innovative and creative in many aspects

In thinking of games with a puzzle and platform character, we would go back to the dawn of video games. And of works of this category, marked by a style that aims to make players feel an atmosphere dreary and disturbing, with unique and distinctive mechanics to solve the various puzzles, there is a smaller amount, but still quite high. Among the most famous is LIMBO, by the Playdead developers, a horizontal scrolling game renowned above all for the creation of the "try and die" mechanics, which leads to observing the death of the boy protagonist, in order to obtain the information necessary to progress in the game.

Numerous games have been released in the past few years focusing on these dark and dramatic themes, such as Little Nightmares and INSIDE. However, as far as the stories may turn out poignant, often some recent titles lack that innovative accent that gives them a personality or trait of diversity from others. Finding a way to revamp a now firmly established gameplay isn't easy, after all. The Monochrome developers, with the publication by the publisher Hatinh Interactive, however, have very well created a new formula to the style of play present in puzzle games, with their title Tandem: A Tale of Shadows, which we will talk about in our review.

The mechanics used in Tandem: A Tale of Shadows are the part that plays really protagonist of this game, but before talking about it more specifically, we will introduce our review with the plot that accompanies the events along the journey of the characters. The story, set in a Victorian London with a calignosa and gothic air, it centers on Emma and a stuffed teddy bear who will then help her advance in her mission, called Fenton. The ten-year-old girl will find herself grappling with a still unsolved case by Scotland Yard, concerning the disappearance of the child Thomas Kane, son of a renowned illusionist.

As she sets off towards the Kane estate, a wagon whizzes at full speed in the same direction as Emma is, and a teddy bear falls from it, which suddenly takes off. to chase the vehicle; in turn, Emma also joins the run-up. They come to cross the large courtyard of the estate, reaching the entrance of the huge and dismal residence. Stepping inside, a strange magical vortex sucks in Fenton, altering his gravity and making him capable of walk on walls. From here on out, this marriage of perspectives it will be the key to being able to make your way between the five worlds established in the structure, facing fearsome enemies and dangerous situations. 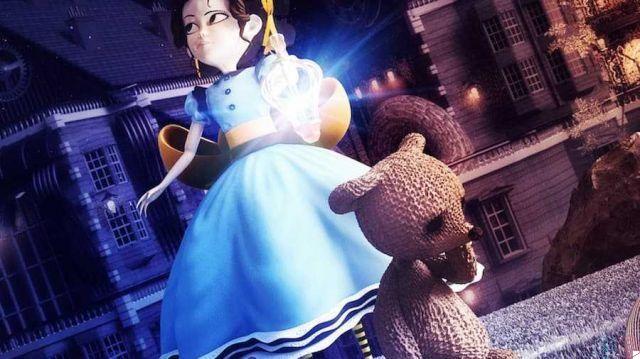 Between fantasy and the absurd - Tandem Review: A Tale of Shadows

The Estate contains five areas, and a different universe is placed in each fantastic or highly surreal. Each universe is made up of a certain number of replayable stages linked together, which once completed will then lead to the respective boss. These worlds are clearly inspired by the tales of the most renowned Victorian-era authors in English literature, including Jules Verne, with a world that explicitly refers to the Nautilus of Twenty Thousand Leagues Under the Sea, and Conan Doyle as regards the investigative theme that occurs in the dialogues that the protagonist proposes.

In this review it is also necessary to highlight how, in Tandem: A Tale of Shadows, the typical design style of the works of Tim Burton. The whole work follows an artistic line, both visual and musical, initially from fairytale traits, but which immediately leave room for decidedly scary and gruesome shades. The same scenario will end up catching the eye, and this happens while all around the protagonists there will be a dark and at the same time colorful world, which gives life in contexts in which it should not exist. 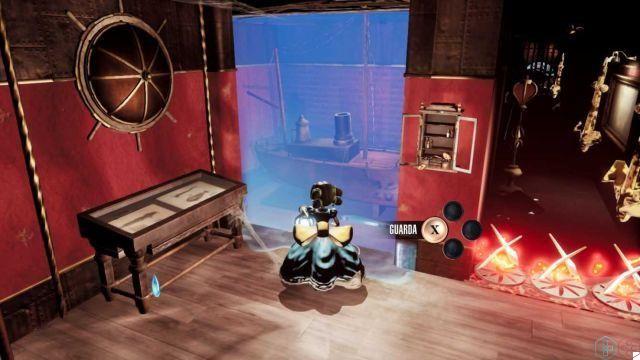 A New Kind of Platformer - Tandem Review: A Tale of Shadows

At each level there will be increasing difficulties, with traps and new enemies that will need strategies to get around them. We say bypass them since neither Emma nor Fenton use any type of combat, leaving us only with tools that can be exploited. with logic to overcome the various obstacles. Since the Fenton perspective has been altered, it has a gameplay based on the double view: one is that of classic 2D platformer, where you will use the teddy bear who will walk among the dangers inherent in the shadows, the other will be from above, and you will control Emma struggling with the oddities of the place. Characters will be exchangeable at any time, except for a limitation.

In fact, if Fenton is not illuminated by the rays of light from Emma's lantern, or by those of a lamp placed around, it will not have the possibility to move, and will remain stuck in the shade or unable to cross it. He will be able to use the darkness of the shadow cast a as a bridge, walking on it to cross platforms that are distant from each other. This mechanics of adjusting the shadows will then require more and more complex and contrived movements, such as having to constantly swap roles to activate switches, make Fenton walk on the shadow of a liquid flowing inside the tubes, complete a 'action. 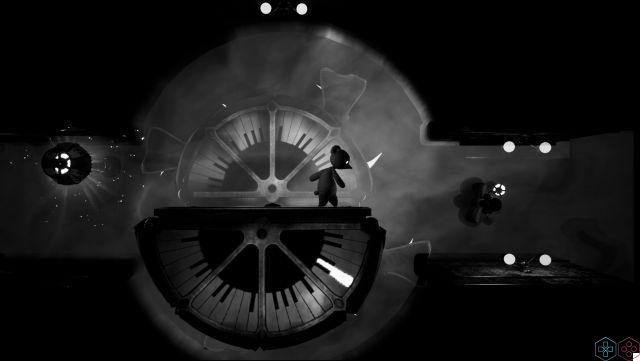 As already mentioned in the previous lines of our review, the puzzles are totally based on the double view offered by Tandem: A Tale of Shadows. It will therefore be necessary follow strategies to complete certain levels, and these won't always be that easy to get through on the first try. Fortunately, (or unfortunately, for those aiming for a higher level of challenge) there is an autosave in the game that creates checkpoint very frequent, for this reason it will be rare to have to restart the level at a point that at that moment seems to be too difficult.

While the teddy bear Fenton will have to press buttons, jump on the platforms and clear the way of Emma, ​​the latter will have the task of moving the furniture in order to alter the direction of the light and the projection of darkness, as well as catching little creatures to break through walls, and make some enemies move. However, to complete the level you will always need Fenton, who will have the task of collecting a magical crystal to then be given to Emma, ​​to then proceed to the next stage. 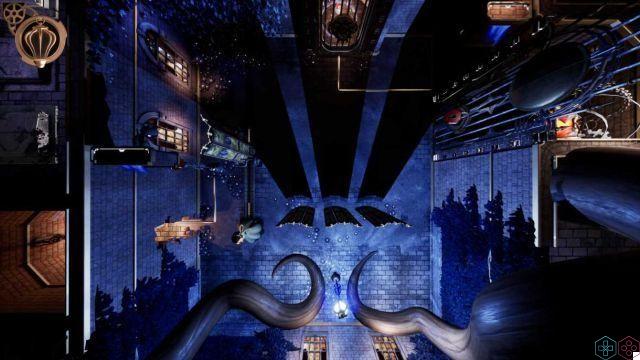 We will have the possibility to modify the contrast and the darkness in general of the levels, and the design of the characters is original and well built, although not too refined animations have been used, making Emma's movements within the slightly "clumsy" and robotic cutscenes. When you advance between the levels there will almost always be a video-interlude with a dialogue or accompanied by the narrator; in them various information about the history of the game is revealed. These scenes, while interesting, may appear superfluous due to the short duration of a few tens of seconds, and a dubbing rather mediocre.

For this reason, it is difficult to express a completely positive opinion on the narrative quality in our review of Tandem: A Tale of Shadows, as it is unfortunately very hasty. The sound sector consists of pressing music, with a magical and almost supernatural trait, which create the right mood and rhythm that we could try in the read a "fable", structured with the same characteristics found in Tandem. Among the problems most present in the game, it has happened to get partially stuck in the shadows and not be able to make the character move, and the commands are not very responsive, especially when interacting with certain objects, or when moving in tight places. . 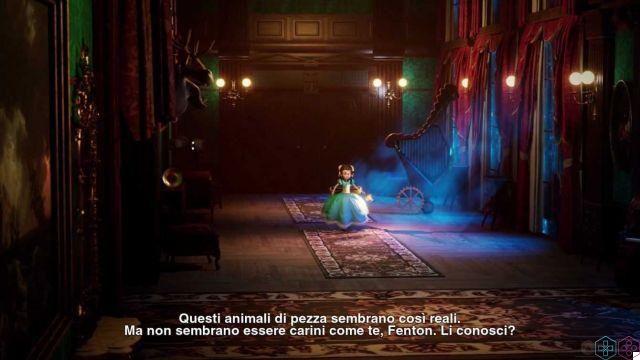 We get to the final stages of this review of Tandem: A Tale of Shadows. The game has a rather explicit title, even if the triggering reason for all these fantastic and surreal events will remain a mystery. After all, when a lifeless puppet begins to perform unimaginable actions for a toy, you always want to find out what allows it. Throughout history they will be found various secret rooms, which will only allow us to deepen the mystery of Thomas Kane's disappearance, despite the fact that we will not yet have such a great attachment to the child.

The way in which the ending is placed seems to at least make clear the intention to create a sequel or second episode of the game, closing the narrative with a decidedly note anti-climatic. The curiosity to see how the plot will proceed from here on, to know the fate that will touch Emma, ​​Fenton and Thomas, leads us to await with interest a possible continuation of the title. However, with it we expect a lot more information from the story, even improvements in the use of the cutscenes, perhaps with longer and more elaborate videos, which show all the facets of the altered reality in which Tandem: A Tale of Shadows is located.

Tandem: A Tale of Shadows will be available from 21 October on PS4, PC, Xbox One, Xbox Series S, Xbox Series X and Nintendo Switch. You can find further reviews, updates and videogame insights on our techigames website. If, on the other hand, you are interested in buying games at a moderate price, we suggest you check out the Instant Gaming store.

6.8 Always forward, between lights and shadows

Tannenberg review: the other side of the war ❯

add a comment of Tandem Review: A Tale of Shadows - The gravity of light