Styx review: Shards of Darkness, will our thief be able to get away with it?

Thieves are seen every day, and even the world of videogames is full of them (who said “Uncharted 4”?). But about the goblin Styx, do we want to talk about it?

Styx has opened the doors, even for the stealth game genre, to an unprecedented charisma and to an unlikely hero who has managed to earn in the last three years a close circle of rather loyal fans, so loyal as to justify the arrival, after the interesting but immature Master of Shadows, even the new Shards of Darkness. Here you can find the official page of the game.

Exactly two years after the first Styx: Master of Shadows, our favorite goblin thief returns once again to nestle in our home consoles and on PC (we have tested this latest version firsthand). First appearing as a sidekick to fellow Orc in Of Orcs and Men, the character's charisma was enough for the thief to earn an absolute starring role in Master of Shadows.

The game was hailed as one of the few pure stealth stealth survivors of the 2000s death, selling a fair number of copies over the past three years. And here we are talking about the sequel: Shards of Darkness. Sequel in which Cyanide took all the elements of the previous chapter, revised them, refined them, and obtained an interesting and solid game.

The plot of the new Styx it is pleasant, interesting and well defined, at least up to the middle of the story told: from then on the narration becomes hugely complicated, reaching some really dark peaks, and generally while aiming upwards it frays, leaves an impression of rough care. For those who have not played Master of Shadows some dynamics may initially appear obscure, but the narration will still be understandable and appreciable.


After the events of the first chapter, the goblins multiplied exponentially, coming to occupy, after invading them, the lands belonging to the other creatures of the world imagined by Cyanide (fantasy world that includes, in addition to goblins, also Elves, dwarves and men) . Just to stem the tide of goblins who have repopulated the world, men have become the promoters of an organization with the disturbing name of MASSACRE. An acronym, of course, but a menacing acronym.

In all of this, it ends up in the middle Styx, as always. Obviously our goblin is not interested in the fate of his fellow men, who among other things he despises because he considers them stupid and unable even to speak. Indeed, he is even willing to ally with one of the lieutenants of the anti-goblin death squads for the sake of money.

Another important character, in addition to the classic bad guy on duty which we will mention shortly, is Helledryn, a fierce fighter who forms a temporary partnership with the protagonist and who craves the power enclosed in a scepter, jealously guarded in an airship kept under strict surveillance night and day. Obviously, guess who can be crazy enough to get involved in such a feat? That's right, Styx. But the matter turns out to be more difficult than expected: arrived in the captain's cabin, where the mysterious artifact is hidden, Styx runs into a cunning and dangerous enemy, able even to thwart his cunning plan.

Defeated and humiliated, the little thief swears revenge, and thus embarks on a journey in search of his nemesis, which will lead him to discover shocking machinations. 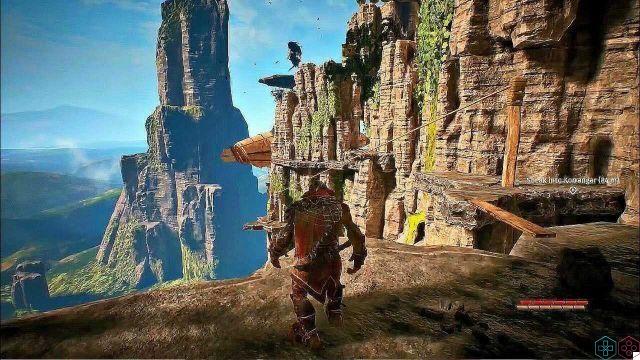 Styx: Shards of Darkness back to the fore loaded with all the elements that had remained interesting and famous the first chapter, which for the occasion have been revised and enhanced. There are also some new additions that can raise the bar of difficulty upwards, to offer a challenge worthy of the name even to experienced players.

The story of Styx will unfold in a series of levels with a studied and effective level design, small "worlds" closed in on themselves but significantly expanded compared to the previous adventure. The game is completely based on the exploration of the environment, circumstances and stealth mechanics of the crafty goblin. Each level will be completed by carefully studying the enemies, ravines and objects present, to achieve the completion of a certain objective, usually that of recovering a particular object: all while remaining hidden and without causing the slightest noise.

Otherwise the sentries will ring the bells and amass hordes of fierce enemies. There is no shortage of secondary missions, which consist in eliminating a certain number of enemies in a certain way, or completing certain paths without alerting anyone and so on. 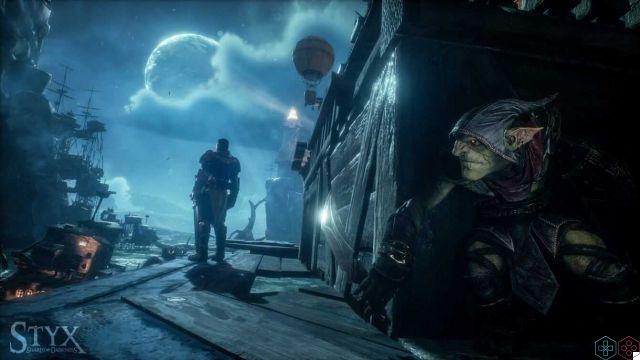 The goblin owns some weapons and skills that make it particularly lethal: sneaking up from behind, for example, can eliminate any enemy. Things get more interesting, however, when Styx unleashes his "supernatural" powers, which allow him the ability to create clones of himself with which to lure and lure the guards, but also to immediately identify everyone's position in each level. points of interest (usable objects, enemies, potential problems).

In the new chapter, a crafting system has even been added that allows the protagonist to create his own weapons and items of his equipment, such as the very useful soporific and poisonous darts. Each level can be tackled using one of the many paths present, none of which is necessarily better than the other. Some types of more risky approaches, however, will be especially suited to those seeking a higher challenge. Everything has been designed to promote high replayability, a factor that does not always go perfectly with an openly difficult title like Styx (there are four game difficulties present, but all still challenging).

Styx: Shards of Darkness is at its best not so much in the game mechanics, now well or badly already consolidated by the prequel, and not even in the narrative sector, but rather in the charisma of the scenography and level design. The small towns built on stilts, the steep and rocky elven cities and even the airships are all cared for in the smallest details and even if it is not an oper-world they push the player, inevitably, to explore them in every nook and cranny.

The developers managed to bring out at least half of the potential that Unreal Engine 4 had to offer them and on a technical level on PC Styx doesn't even give in to a hesitation. We did not have the opportunity to test the versions for Xbox One and PlayStation 4 first hand, but it is plausible to believe that the work done by the team has been more than satisfactory even on consoles.

7.5 Now we are waiting for a third chapter to close the trilogy!

add a comment of Styx review: Shards of Darkness, will our thief be able to get away with it?