Any self-respecting gamer knows that in any video game, the goal is not to die in order to progress through the levels or reach your goal. Every gamer knows that survival is everything, that every life point is important and that the fate of the game world is in his hands (maybe dirty with cheese chips but always in his hands)

What if I told you that the guys from Chubby Pixel, overpowered everything sacred in a video game, and did it damn well too? If you don't believe me, keep reading Suicide Guy's review.

La Suicide Guy review begins by telling you the main mechanic of the game: suicide. Do not rush to leave comments of "goodness", this is a video game and should be taken as such. The cartoonic, almost grotesque graphics prevent any identification or danger of exchanging the game world with something even remotely real. Everything is designed and studied to entertain the player, even if I am sure that the first to get involved and have fun were the developers themselves.

Forget about survival! Here to advance you have to die ...

It all starts with our protagonist sipping a beer after work. The big man, however, has a small problem, sip after sip he finds himself squinting with the fizzy drink that sooner or later will end on the floor. The plot of Suicide Guy is all here. No damsel in danger, there are no fire-breathing dragons (actually there are), or universes to help. It all boils down to waking up from your sleep, before Morpheus' embrace has run its course and the bottle shatters on the ground due to the law of gravity.

How to wake up is soon said. As it is easy to guess from the introduction and the title of the game, the only way to wake up is to succeed in trying to end one's existence. In the video game there is no direct tutorial, but the first level will do this more than discreetly. Once you are struck by the first hint of sleepiness, you will find yourself on the roof of a building. The only thing you can do is groped to throw yourself down, and since our protagonist can't fly… black screen and continue. 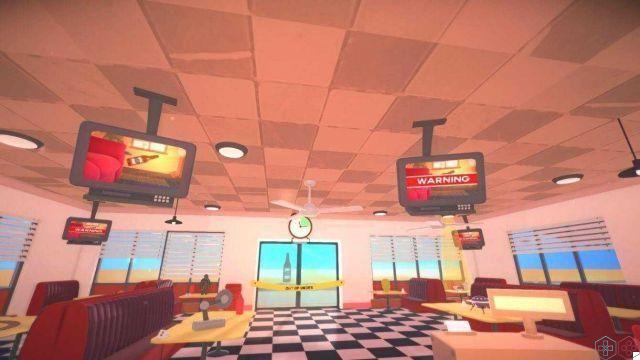 The dream in the dream, Suicide Guy has nothing to envy to Inception

Once we have made our first leap into the void, we will not wake up but we will find ourselves in a sort of Hub. The real game starts here.

After the first level which, as explained above, is used to learn the basic mechanics of the game, we will find ourselves in a fast food restaurant. From here the game levels will gradually unlock and, again from inside the restaurant, we could start again towards the next step that will take us towards the end of the videogame. Each level will be a dream that will have nothing to do with the previous one. Settings, colors, strategies, and music will always be different and disparate.

A peculiarity of many levels will be the possibility of recognizing settings taken from other videogames or cult films. It will not be difficult to recognize Super Mario, Tomb Rider, Portal o Jurassic Park (to name a few). While this choice undoubtedly arouses hilarity and a pleasant sense of belonging, it is not always a happy choice. The "Super Mario level", for example, could prove frustrating. Having too many "platform" phases in a title that does not excel in this feature was not a perfect choice, even if everything is compensated with innovations able to maintain an identity of its own. Suicide Guy. 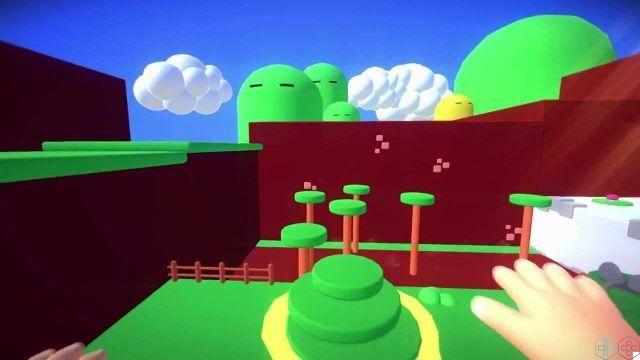 Overall the gameplay of Suicide Guy it is innovative thanks to the idea that lies at its foundations. Some levels are undoubtedly more inspired than others, but some sections may make you want to kill your character, never mind though. After all, isn't this the point of the game?

Even if the platforming stages aren't exactly inspired, don't worry. The developers have well thought out to include longer jumps, and some sort of invisible force that will help you get to your destination. An inelegant but necessary and functional method. Each level will be a new discovery, and you'll find yourself using your gray matter to solve little puzzles. Even with regard to the puzzles there are more inspired and less interesting. Thinking outside the box from time to time will be a must, and overall all the puzzles that make up the game will bring you a little satisfaction once everything is solved. Perhaps it would have been better to invert the positions of some levels to have a growing parable of the difficulty, but in the general picture we cannot complain about the quality of the riddles that will lead our elderly protagonist to the next step. 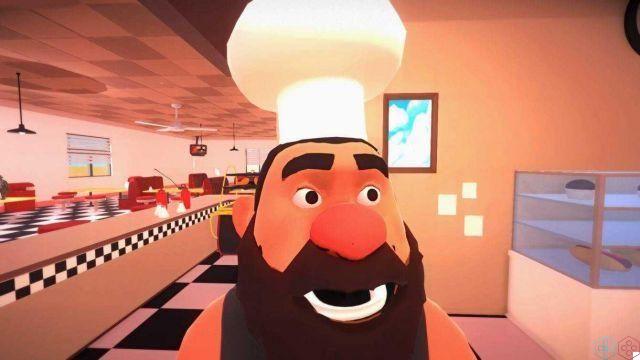 The technical level is not bad. As we previously learned from Heaven Forest or Woodle Tree 2, Chubby Pixel knows how important it is to mix colors and settings.

Unfortunately, the fun from time to time is tainted by some bugs, which as long as it remains within the limits of the surmountable is able to tear a smile. Everything almost seems to be part of this bizarre world, where our protagonist does not grab objects with his hands, but makes them "flutter" in front of him with a sort of telekinesis. After all, the dream is his, he will be the master of moving objects as he sees fit, right?


In short, you can fly over flying objects and some badly calibrated jumps. What you can't gloss over are technical defects that affect the continuation of the game. In particular, I am referring to two levels and two specific bugs. In the first case the map suffered a crash that made our protagonist look like an astronaut in the void, who sees the earth moving away slowly. The problem is that it didn't die (did you understand the genius of the idea?). After restarting the level two or three times, I realized that the only way to continue was to close the game and reopen it. By doing this I was able to start, and complete the level without any problems. The second bug was harder to digest. A key object that was thrown at a certain point disappeared into the wall. In all likelihood, a programming error was not making the walls solid. After a few attempts, even this small inconvenience was overcome.

Not just bugs in this Suicide Guy review

Having made the necessary "criticisms" of the game on its technical aspect, they must also be made due compliments to the guys from Chubby Pixel. Little things that could have gone unnoticed by anyone who is not a "worker" have not escaped my trained eye. The game has a very good light which, although not dynamic, offers a character with a respectable shadow that varies according to the distance from the ground, the angle of the camera, and any objects in your hands.

Another thing I really liked is that music is not a mandatory requirement imposed on the player. Rather a choice of the player himself.

You can decide whether to have it or not to have it, to turn it off and on at any time without ever leaving the identification of the dream to enter some game menu. All this is possible thanks to the addition of a radio present in each level. In addition, the music is dynamic, in fact the closer you are to the device, the louder the notes will be and vice versa. 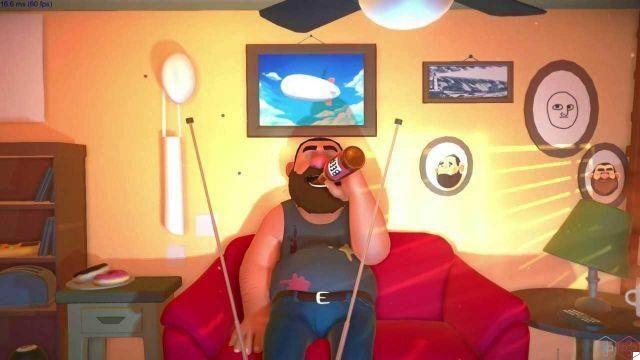 Suicide Guy: Time to wake up

Drawing the conclusions of this Suicide Guy, it cannot be denied that the desire of the developers to get involved first is to be rewarded. A few small technical gaps do not affect the fun of the title.

Less inspired platforming stages are quickly forgotten, thanks to riddles and fun puzzle sections. Some levels are obviously more inspired than others, some are irreverent at levels that I never expected again. But thanks to his distinct uniqueness, this Suicide Guy has been able to go where few would have the courage to do so.

In conclusion I feel like promoting this video game, but not for its technical side or its innovative gameplay. Rather for the courage of the developers and the really above average character design.

Syberia 3 review: half an innovation ❯