in this review we will return to the island of Koholint, the protagonist land of the remake of The Legend of Zelda: Link's Awakening. Will the developers be able to reproduce the magic of the old Game Boy title? Let's find out together

Nintendo had already tried two years ago to completely remake an original game of the Game Boy, Metroid 2: The Return of Samus. In that case, the well-known Japanese production company was faced with the challenge of having to rejuvenate a title released 26 years earlier. The game mechanics for Game Boy they were woody and the aesthetics decidedly poor due to technical limitations.

The remake that came out in 2017 turned out to be a pleasant work of "restructuring", which added a bit of modernity to the old title: new Power Ups, fluid movements, the inclusion of a map and so on. The news were so many that it was almost difficult to recognize the previous Game Boy game. With The legend of Zelda: Link's Awakening, Nintendo tries again and the result is very interesting.

Originally developed for the Game Boy by Nintendo, Link's Awakening was released worldwide in 1993. In 1996 an updated version called DX came out, ie Deluxe. This latest version was enriched with compatibility with the Game Boy Color and Game Boy Printer, a new dungeon and NPC. Many of his ideas and features would become gods cornerstones for the entire Zelda series. The remake of The Legend of Zelda: Link's Awakening was released on September 20, 2019, developed externally by Grezzo. Japanese company known for having previously worked with Nintendo on remakes(quasi remaster) by Ocarina of Time and Majora's Mask.

The game starts with an animated sequence of Link, our protagonist, fighting the waves on a small boat violently moved by a storm. Our boat is struck by lightning and in the next sequence, Link is lying unconscious on a beach. Marin, a pretty red-haired girl, helps us and bring to safety. We wake up on a bed disoriented and get to know our savior and her father, Tarin. From this moment we take control of Link and find we are shipwrecked on an unknown island named Koholint, with no clear way to get home. We will learn from an owl that our arrival on the island was told by a legend. We are the herald of awakening and we will not be able to leave the island until we have woken up the Wind fish.

The plot of the original 93 game hasn't changed in this remake. For this reason, I find it useful to know the influences that the original development has given to the game. In the late 80s, Kazuaki Morita (Nintendo developer) began to solo develop a portable version of The Legend of Zelda. The idea and the results were so astounding that other programmers voluntarily joined him to expand the project. Nintendo saw its potential and Link's Awakening slowly took shape. This development born from the passion of several developers volunteers, gave rise to a game with decidedly playful tones without however resulting in the banal or too childish.

The Legend of Zelda: Link's Awakening hides, in fact, under a rich blanket of colors, interesting themes with different reading plans. The creators of the game also had fun organically inserting quotes from the world of video games: we will see Kirby, Goomba, Dr Wright (from SimCity) and other characters and creatures. Many influences and themes present in the game also came from TV, including the series Twin Peaks released in 1990. 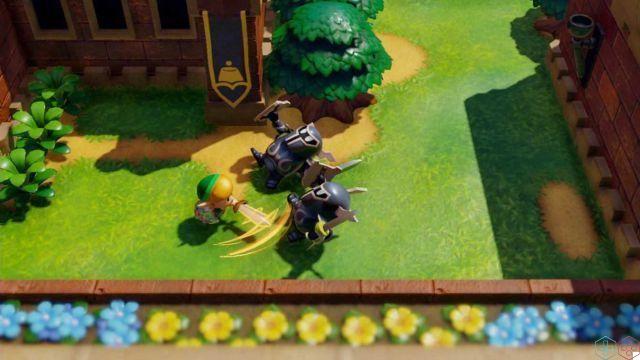 Not just slashes and sweeps - The Legend of Zelda: Link's Awakening Review

The remake of Link's Awakening is a video game belonging to the genre action adventure with tilt-shift style top view(tilted perspective). There map in which we will sail is semi open, Its scouting in fact it is linked to the objects we will find. We will fight with the help of our paraphernalia, against monsters and creatures of all kinds. There sword will be our main weapon accompanied by the shield for any defense needs. In addition to these two, we will also get hold of several tools that will help us explore, fight and solve puzzles. Some equipment will be for active use, that is, usable with a specific key of our choice between X and Y, others instead for passive use. One of these are the fins: they will allow us to swim, immerse ourselves in the water (avoiding monsters or to reach underwater areas) and cross rivers to explore previously inaccessible areas.

Many tools will be obtained by exploring or completing gods labirinti (also called dungeons or dungeons). Inside them we will have to fight monsters, but mainly complete puzzles for reach the final boss and emerge victorious. These puzzles vary widely in difficulty, and generally none are so complex as to block progress for too long.

Essential in the game is exploration. Koholint is an environment full of secrets and collectibles to obtain. Proceeding into Link's Awakening will often be tied to the player's desire to find out what the island hides. Several important objects are in fact only obtainable thanks to the exploration of secondary roads or the completion of tasks apparently unimportant. Do not worry, if we were to stop ourselves in the progress of history we can rely on the advice that will come from the "telephone houses".

Ulrira will be on the other side of the phone to help us, but he's only one of the many characters that we will meet on the island. Mabe Village is the most densely populated area and also our starting point. Its inhabitants are all very varied and, albeit with few lines of dialogue, very well characterized. We will not fail to meet for example the aforementioned Tarin, himself a reference to the aesthetics of Super Mario. He is a funny and lovable character who will get into trouble because of his greed. We will also see an unfortunate ghost who just wants to see his old home again. 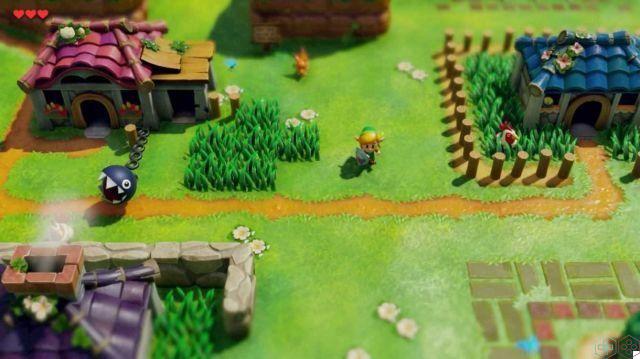 What news does the wind bring? | Review The Legend of Zelda: Link's Awakening

A strange character already seen in the universe of The Legend of Zelda will make an appearance in the remake of Link's Awakening, Dampei. When we get to know him, he will act as an intermediary with the construction of Tile labyrinths. With this function and the use of Tesserae Stones, we have the possibility to create dungeons that can be faced by us or locally by our friends. The Tessera Stones are precomposed rooms, created by Dampei in the image of environments that we have already visited in the basement, which when juxtaposed as in a puzzle, form a labyrinth. The completion of these labyrinths is mainly used to unlock items or increase our wealth. The harder the dungeon is built, the more loot will be. To add variety, compatibility with Zelda Amiibo is available, which can be used to obtain new Tile Stones. Take a look at our guide to learn more about the topic.

That of the Tile Labyrinths is a feature that has replaced a feature from the original Link's Awakening DX. Previously, instead of the Dampei hut, there was the Camera Shop. Inside we would have made the acquaintance of a photographer mouse. Its purpose was to follow us and take pictures of us in funny moments made ad-hoc. These photos were then available in an album in the shop and printable with the antiquated Game Boy Printer.

The addition of Labyrinths to Tiles is perhaps the biggest change from previous Link's Awakening. Always another addition but on a smaller scale is the Trendy Game update. It is a classic mini game where, with the help of a claw, we will go to collect useful items. Physics support has been added in this remake which increases the challenge level. Also in the Fashion Game it will be possible to capture collectibles for decorate the interior of the houses of the Mabe Village. 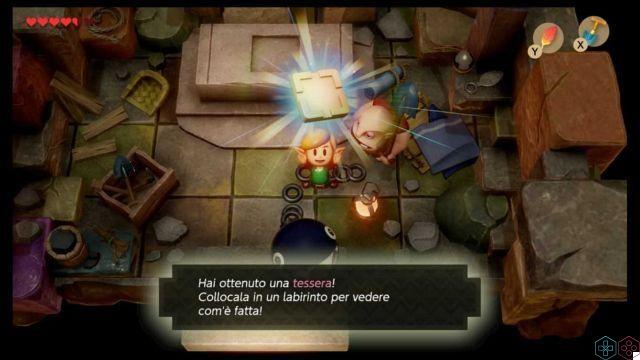 For the rest, this remake does not see other feature additions, but mostly improvements to the "quality of life". In fact, we now have the possibility to use the shield at any time with the R or ZR key, without having to necessarily equip it by removing another object from active use. Other changes can be found in the design of the environments that have generally been cleaned up from superfluous objects, without however distorting the feeling of the old title. Even the motion controls have been faithfully fixed to the 8 axes as in its old iteration (the D-pad on the Game Boy was used to move). Unlike the aforementioned remake of Metroid 2, for this Link's Awakening the maximum fidelity to the original. Finding changes to features and game design is particularly difficult in this remake. 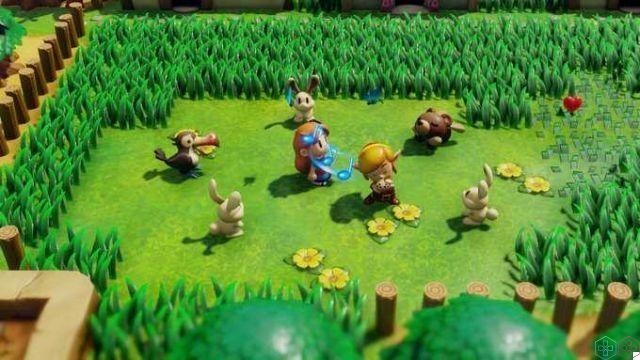 Graphically, the impact is certainly delightful. Characters and environments have been translated from 2D to 3D with great care. The island of Koholint has in fact been reproduced in every colorful detail through a style reminiscent of small and shiny dioramas. In fact, Nintendo at E3 2019 brought some real ones in the image of the gaming environments. The design is certainly the evolution of the styles adopted in previous Zelda titles: in Link Between Worlds and Wind Waker. some technical defects.

The game runs at 60 fps, at a resolution of 1080p in dock mode and 720p in laptop and Lite. In our adventure it will be easy to observe various frame drops, identifiable for the most part in moments of transition between one area and another. Despite the obvious annoyance that these dips can cause they will not go below 30 fps and never (in review) when the action becomes more intense. We arrive at the end of the adventure that has become accustomed to us by now. There is no news yet, but hopefully a patch will fix the problem.

Soundly Link's Awakening is faithful to the classic Zelda tradition: no dubbing and different soundtracks for every occasion. The characters will (rarely) communicate through sounds that represent them, except for a few short singing performances. Those who were instead disappointed by the minimalist music of Breath of the Wild may rejoice at those of Link's Awakening. Each original title soundtrack has been faithfully translated with musical instruments, giving an epic orchestral effect to our adventures. However, there are some chiptune sounds that refer to the notes of the Game Boy title. 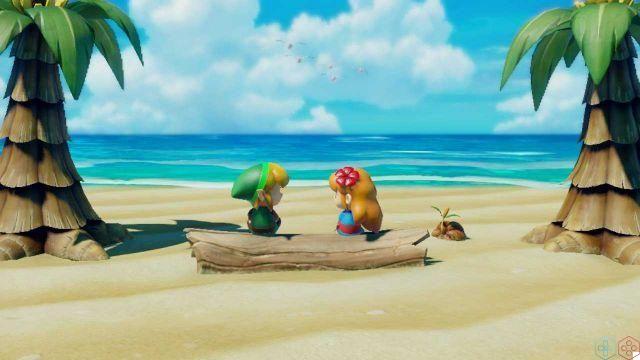 The Legend of Zelda: Link's Awakening is an example of how good titles from a different technological era still have a lot to say today. This remake will certainly not be revolutionary, but it carries with it the same playful spirit that emanated 27 years ago. For some it may seem too much to spend 60 euros in one title from 10-15 hours, but not all games have to last 300 hours to be enjoyable like The Witcher 3. It may not be a must have for all Nintendo Switch owners, but it certainly is for those looking for an exploratory, relaxed and compelling title.

This was our review of The Legend of Zelda: Link's Awakening. If you are more interested in a messy game, full of weapons and explosions, read the Borderlands 3 review

add a comment of Review The Legend of Zelda: Link’s Awakening: un piacevole ritorno a Koholint