The Low Road, a fun adventure full of twists, makes us participate in one of the saddest realities in the universe: even spies are subject to bureaucracy and office work, and not everyone can work for top secret government agencies.

In this review we will analyze The Low Road, a point and click adventure set in the world of espionage, developed by the indie studio XGen Studios. The game is available on Nintendo Switch and PC via Steam at a recommended price of 14,99€.

The Low Road: there are no more spies than they used to be | Review

In The Low Road, we play the role of Noomi Kovacs, a young recent graduate of the LeCarre Institute for Exceptional Spies (LIES) who can't wait to jump into action, defuse bombs and sabotage evil criminal organizations. Unfortunately life as a secret agent is not exactly what James Bond describes, and our newbie will have to find out the hard way after being hired in the Intelligence Department of the Penderbrook Motors auto agency, where she is confined to her desk. Determined not to spend the rest of her career between phone calls and paperwork, Noomi decides to go against all her colleagues to get the chance to test her skills. Having obtained permission to work in the field with his boss Barney “Turn” Turner, a disgraced former government agent, our spy will discover the truth behind what appeared to be a simple case of industrial espionage.

The Low Road disrupts the concept of espionage we are all used to, adding humor and sarcasm to the typical dark and mysterious atmosphere. Like any graphic adventure, the game is punctuated by a large presence of dialogues that can lead to two endings depending on the choices made during the adventure; in some phases of the game you can also unlock a sort of fake bad ending, and then return to the checkpoint. Lively and ready for anything, Noomi has the characteristics of the typical protagonist of adventures: intelligent, sarcastic and determined but at the same time compassionate; all the other characters, however absurd and improbable intentionally, are well made and consistent with the story. 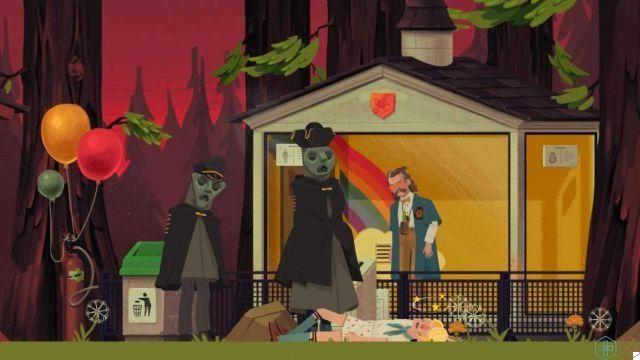 The Low Road: Who Said Poetry Isn't For Everyone? | Review

The developers of XGen Studios have decided to invest heavily in the diversity of puzzles to ensure the most varied gaming experience possible. In fact, in addition to the classic environmental puzzles typical of point and click, in which we have to look around and use the objects at our disposal to proceed, we can find phases of first-person shooting, poetry competitions and attempts to pickpocket against our colleagues, investigations telephone calls in which you try to find out as much as possible with very few clues. Despite the apparent jumble of genres, the story manages to blend seamlessly with the mechanics of the puzzles and you get a fluid tale which proceeds smoothly and dead spots without ever being boring or distracting, but which on the contrary turns out to be fun and enjoyable despite the adventure lasting only a few hours.

The only slowdown is due to the fact that the game is not translated into Spanish but is only available in English and French. Basically, the level of knowledge of the language is not the most advanced, but there are some specific terms from the world of espionage that not everyone knows, and certain puns may not be understandable for everyone. It is not so much disabling from the point of view of the mini-games, which are very intuitive, as it is for the story, as it may be necessary to dwell a little more on some of the many dialogues to be sure that you understand everything we are told. .

The Low Road: you don't always have to take yourself seriously | Review

For the art sector of The Low Road XGen Studios has chosen 2D cartoon graphics with deliberately flat and almost angular tones, with full and bright colors, deliberately inspired by 70s television and accompanied by a fantastic soundtrack in full 007 style. Although the general visual aspect is more than satisfactory, the choice of character animations leaves something to be desired; the mechanical and robotic movements make the characters similar to puppets, and the deliberately exaggerated dubbing does not contribute to making the scene less grotesque or unnatural.

The Low Road is a well-made title, beautiful to look at and to play, perfect for spending a few hours with a colorful and absurd story at the right point. The game manages to overturn and desecrate the classic vision of dark and mysterious spy stories thanks to a story and characters so absurd as to be completely credible; all crowned by the right dose of sarcasm and cynicism towards large multinationals.

7.5 A must for lovers of the genre

Review The Outer Worlds, that is, Fallout in space ❯