House Flipper also arrives on Nintendo Switch and this time we take the opportunity to bring you our review, find out with us if it's worth it ...

Creating something interesting doesn't cost money, making it happen. You can consider this incipit as a summary of the entire contemporary independent gaming industry. A market that is more flourishing than ever and full of extremely valid titles, often missing only from the technical and manufacturing side. A market that, if you think about it, has brought to the fore titles like The Binding of Isaac, born as “One man Job” and turned into a mass phenomenon. Defining which titles are actually completely "independent" is now very difficult.

There are publishers, such as Digital Revolver for example, who deal exclusively with this sector. Other independent developers have then joined forces with "official" publishers, making this slice of the market, as well as the entire videogame market in general, very fluid and subject to change. And this can only be good for gamers.

We are not here, however, to make a survey on the contemporary videogame market. In reality, however, we will talk about a market, trading and auction fluctuations. However, we move from the videogame field to the real estate one: in short, we are talking about House Flipper. Developed by the small studio Empyrean and published by Playway SA, House Flipper is a simulation video game originally released in 2018 on PC.

The title has been a huge success on Steam, so much so as to convince the publisher to bring it first on PlayStation 4 and Xbox One and, only recently, also on Nintendo Switch. Roll up your sleeves and get ready to get dirty: let's start the House Flipper review.


But was it really needed?

Thinking that a simulation title on the refurbishment of indoor environments can be fun enough to become almost a drug is pretty weird, isn't it? Yet it is actually the effect that House Flipper had on us. Let's admit that, looking at the released trailers, we wouldn't even have given a penny of confidence to the Empyrean title.. Yet, pad in hand, House Flipper turns out to be terribly fun, addicting and satisfying.

The purpose of the title is quite simple. We are "handymen" engaged in the renovation of home interiors. Through the laptop that we will be able to find in our "office", a shack initially, we will be able to accept jobs from various clients. Did an old lady rent a house to some students who then left it in a very bad condition? No problem, we clean, fix, repaint and replace the radiators that those wretches have taken away out of spite. Does a family need an extra bathroom? Very simple, we raise a wall where it is needed, repaint and connect the toilet, sink and shower. 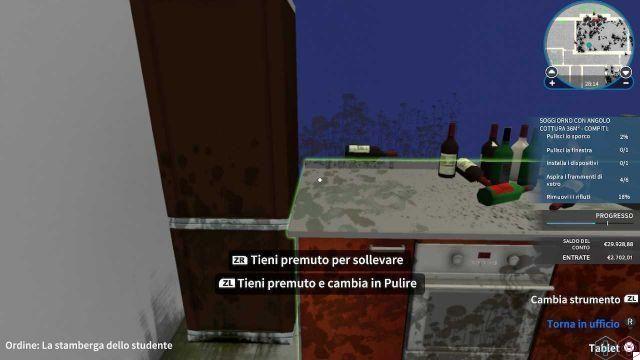 The various tasks that will be required of us will gradually become more and more demanding, but also profitable. In fact, if we have to use our funds to buy the missing items, on the other hand, any action we take to complete the order will raise the cost of our performance. Thus the final profit will also go up. It is therefore advisable to pay particular attention to cleaning everything, painting every wall and setting up the rooms as requested by the client. The more satisfied you are, the more we will be paid upon completion of the order.


Using a tablet that we will always have at our disposal, just press the - button on the Switch controller, we will be able to select the items to buy from furniture and services. We will also have a wide range of wall paints, tiles, wallpaper and decorations of all sorts available. A rather large catalog full of customizable objects in colors, albeit to a limited extent. Our tasks will then range from simple cleaning and waste removal, to painting the walls, moving on to placing tiles, arranging or tearing down walls and more. 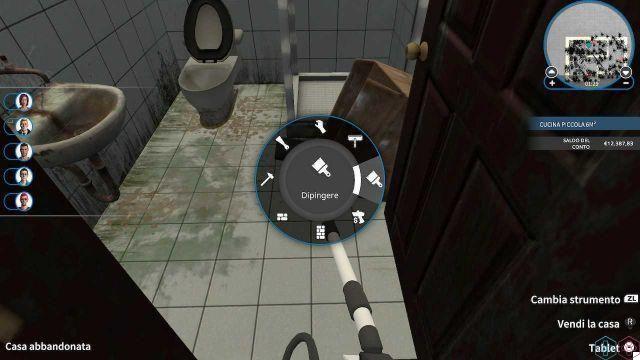 We will also be able to place the various connections for utilities. Often we will find everything already in place, but if we are asked to create a bathroom from an empty room it is normal that the water pipes are needed. UOnce positioned, we will be able to buy sinks, showers and toilets to be positioned and assembled by pressing a series of buttons. They are not real Quick Time Events because there is no time to expire, but we understand each other.

Carrying out the various orders in other people's homes will allow us to earn money to buy our own homes. Always using the laptop that you will find inside your office, in fact, you can surf the net and find various offers for decadent homes, often ruined and obviously in need of renovation. You can buy these properties for increasingly important figures, renovate them and then decide whether to sell them or to move to a permanent establishment. 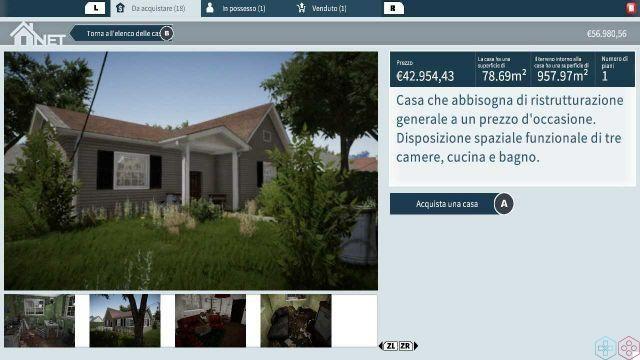 The sale of the property is based on an auction. In fact, you will have five different buyers who, while you work on the restructuring, will comment on your actions and give you tips on their preferences. If you satisfy all the preferences of a buyer, he will obviously be inclined to offer you a larger sum for the purchase of the house. It will therefore be up to your skills to know how to balance the expenses that you will have to make for the restructuring and the final gain when the work is complete.

Earning a lot of money will not be difficult at all, quite the contrary. The difficulty level of House Flipper is set very low, especially if you are a perfectionist in the various jobs in other people's homes. You will hardly ever find yourself in financial difficulty, also considering the affordability of the prices of the objects in the catalog. A radiator that costs € 40 you have never even seen, let's face it. 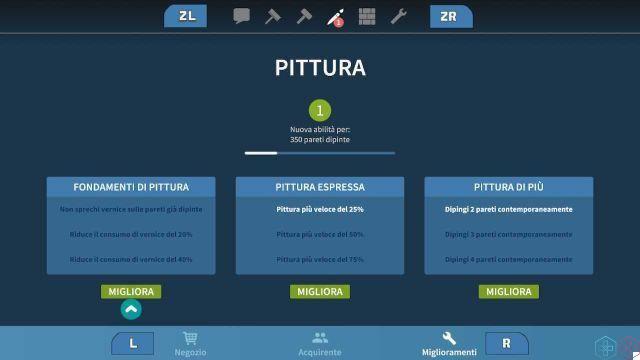 As you use your skills to complete your tasks, you will acquire skill points to spend on various specific actions. There are six categories in which you can spend your points: bargaining, cleaning, demolition, painting, construction and handyman. Each category will have three sub-categories with three specific items, which will be used to increase specific skills. A good degree of customization, in short, but you can easily complete your skill tree while continuing to play undeterred.

In short, House Flipper seems to be a management software that works. Lots to do, good customization options, interesting mechanics, and a real sense of progression. But let's come to the sore point of Empyrean's title. What could possibly be the flaw of a low-budget indie title? 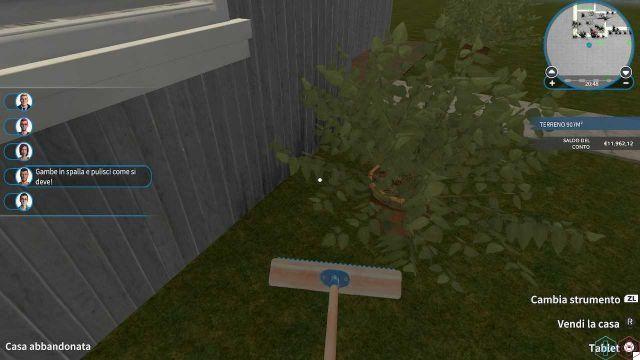 Technically speaking, House Flipper is a cry. Attention, the aspects we are about to talk about do not spoil the use of the title in any way, except for some small details, but during the review it is necessary and very obligatory to talk about it. Another small premise: we don't know how the title runs on PC or on Sony and Microsoft consoles, our review is based solely on the Nintendo Switch counterpart.

House Flipper on Nintendo's hybrid is a mass of low-resolution textures. Although, as we have said, the furniture and services are customizable and all different from each other, looking at them closely will hurt the soul. Whether it is a compromise to run the title at its best on Nintendo Switch or a real optimization problem we cannot know., the fact remains that aesthetically speaking the overall performance is very ugly. The Frame Rate, on the other hand, is quite stable, with some very slight drops in the event that we have to decide for who knows what reason to fill a room with objects. 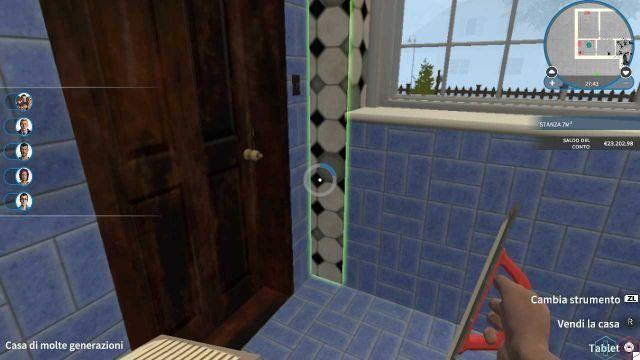 Sore point also for the commands, often inaccurate. We had to lower the sensitivity of the controller almost to a minimum in order to be as accurate as possible, but in any case it was still complex in some contexts to perform precision maneuvers. In particular, painting the damn corners of the walls behind the cabinets will initially make you fall out several strands of hair. Once you get the hang of it, however, everything will flow away much more simply.

The audio sector is also insufficient, both for what concerns the “soundtrack” (a single track repeated indefinitely) and for the quality of the sound effects. On the other hand, the presence of the Spanish adaptation is surprising, also pretty good we can say. Considering that there are large amounts of text, we would have expected a lot more blunders. Instead, it must be admitted, a good job has been done. 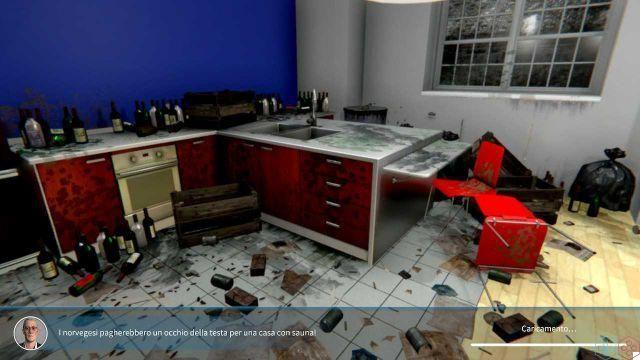 Ultimately, House Flipper is good management. Fun, addicting and satisfying from all points of view, you will spend several hours repainting walls and deciding which tiles to put in the bathroom. On the other hand, House Flipper is a low-budget indie title and, as such, suffers from all the technical flaws you can think of. Especially in its Nintendo Switch version. Our advice is, if you can, to recover it for PC where it will certainly be more usable both at a technical level and at the command level. For the rest: arm yourself with holy patience, especially when you have to place the wallpaper.

Review Huntdown: the value of the past ❯