Mario Kart 8 Deluxe arrives as the second killer app for Nintendo Switch, with the task of driving sales after the enormous success of The Legend of Zelda: Breath of the Wild. Did Nintendo get the bang again? Is it really worth buying the Mario Kart 8 remake on the new console too? Let's find out together

Here we are. After having fleshed out the title in the last few days, and after offering you a first guide dedicated to unlocking Mario Gold and a second guide in which we have analyzed the brand new battle mode, we are ready for the test for nine. We are talking, as you may have guessed, about our review of Mario Kart 8 Deluxe.

A title that at the same time is both a gamble and a winning choice right from the start. A gamble because, basically, it is also the same Mario Kart 8 arrived in 2015 on the Nintendo Wii U. A winning move because, as we know, in all sauces, in all formats and on all consoles, Mario Kart is the game that makes you sell a thousand thousand copies.

And on Nintendo Switch, the new Nintendo housewife, there is really no shortage of games at the moment. That is fine, The Legend of Zelda Breath of the Wild it's a wonder, but finished that? We find ourselves in our hands only a tide of overpriced indies, to be honest. Mario Kart 8 Deluxe performs this function of bridge between the current Zelda and the next new IP Nintendo, Arms, arriving next June. And for a couple of months, but even beyond, it will give us whole days of fun.

Because yes, it is worth buying again Mario Kart 8 Deluxe also on Nintendo Switch, and now we tell you why.


Fun and novelty take to the track

Mario Kart 8 Deluxe returns to the fray with a truly impressive amount of content. Nintendo's publicity was quite clear about it, presenting it as "the greatest Mario Kart ever" that you can play "where, when and how you want". And indeed it is so.

In terms of content, and as we had anticipated in our first guide, Mario Kart 8 Deluxe contains an impressive 42 characters (42!) from all the chapters of the series and from the two DLCs released on Wii U. In addition, the Inklings of Splatoon, Bowser Jr and a few other latecomers also heat the engines. There are 48 routes, divided into 12 cups of 4 tracks each. And they are all different tracks, including the Hyrule Castle, the Animal Crossing Village and paths of all the more or less recent titles in the series. 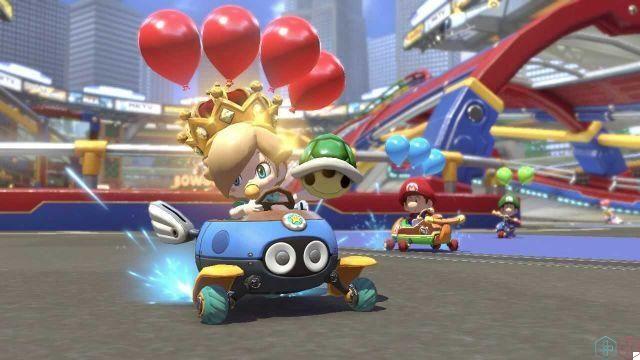 Mario Kart 8 Deluxe is in mechanics identical to Mario Kart 8 and very similar to Mario Kart 7: we have very modular and easily controllable skids, pre-heeling hop always with R, glider and propeller for the aerial and aquatic sections. Obviously there is also antigravity, the great addition that arrived on Wii U, which allows you to run in overturned portions of land, or more simply on vertical walls. Although it may seem overly complicated, anyone who has already played Mario Kart 8 knows very well how much the feeling of running is never altered by these variables.

In the game you think about arriving before the others, without stopping if you are upside down: the only ingredient that really changes in this context is the possibility of collide with other pilots and, being in antigravity, get acceleration rather than a deceleration. Here, a novelty that will interest a few fans, but which is very welcome, is the assisted driving: Nintendo has focused a lot on this feature, so much so that at the beginning of the game, and only in certain modes, it must be deactivated because it is the standard.

What exactly does it do? Well, it prevents you from going off the track. The character cannot go outside the limits of the circuit, so he does not fall and does not suffer particularly severe impacts from the barriers. Of course, such a setting does not allow you to pass close to some obstacles, as well as to take certain shortcuts, but this driving mode, limited to beginners, really succeeds in its intent: in this way an inexperienced runner has much more fun.

About driving, the second big news of Mario Kart 8 Deluxe is the weakening of fire hopping. Don't be afraid of the name: it was simply one technique used to prolong post-drift acceleration through a series of small jumps left and right. It was not easy to use, and it took a long time to master, but evidently it was not foreseen by Nintendo, which preferred to remove it. At the moment no "advanced" replacement technique has emerged, but it is still too early to rule out the possibility of it being discovered.

The third notable addition to note concerns the introduction of further acceleration out of the corner: keeping the drift loaded, after a few seconds you get the first miniturbo, followed by the superminiturbo, and now, letting more time pass, comes the ultra miniturbo. It is a useful maneuver but it will make the difference more in time trials than in races: based on the game statistics we can tell you that we have obtained the ultra miniturbo 300 times out of about 5000 drifts, as opposed to the first and second that we have released 2500 and 1200 times. 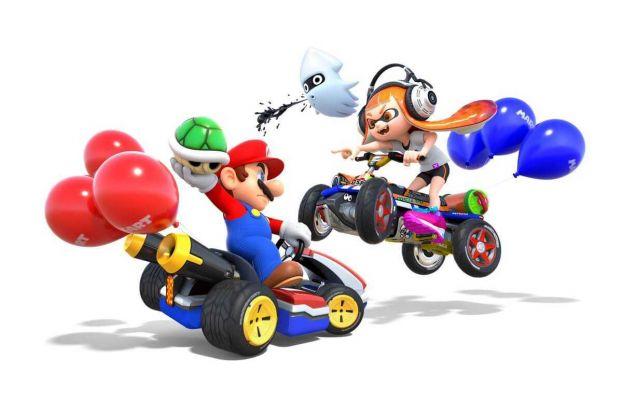 The technical department of Mario Kart 8 Deluxe has been treated and refined in every aspect. Although the menu appears to be identical to that seen on Wii U, its intuitiveness and accessibility should be emphasized once again. Also the game runs smoothly a 60fps and 1080p in home mode while the resolution drops to 720p in portable mode. The new Nintendo hardware performs very well and has made it possible to improve the system of shadows and lights and to further refine the textures.

For il multiplayer in split-screen it does not differ particularly from what was seen on Wii U. With the screen split between two players, the gameplay remains at 60fps but switching to three or at most four players will be reduced to 30fps which will make the controls less immediate on the screen. The sound is good, certainly in portable mode the various effects and the various melodies are not able to immerse us particularly, but if you have a nice pair of headphones to connect to the audio jack or if you have a home theater for home mode, we guarantee that the gaming experience will be even richer and more satisfying.

Impossible not to mention all the possible game options granted by the Switch. Perhaps a little less than the four-player split screen mode using the tablet as the screen would become really too small for a good gaming experience, but surely the two-player local split screen fits perfectly and the possibility of using the Joy- Con, as long as you don't have too big hands, it's still satisfying.

8.8 the greatest Mario Kart ever!

add a comment of Mario Kart 8 Deluxe review: the moment of truth