Elea Review: Episode 1 - The other side of science fiction

Elea is a first-person adventure developed by the newly born Bulgarian studio Kyodai Ltd. and published by the best known Soedesco who has covered titles such as Tricky Towers and Among the Sleep. Bringing news to science fiction is a fairly complex and demanding task, and it is very easy to stumble and fall into the worst clichés and clichés, but Elea amazes from the very first moments of the game thanks to surreal atmospheres and situations. Throughout the first episode I found myself wandering thousands of light years from Earth simply by the desire to understand as much as possible about this new world.

Elea is available in Early Access on Steam, but will be officially released on September 6 on Xbox One and Steam for € 9.99.

Disclaimer: This title relies heavily on fast and intermittent light effects, so it is not recommended for anyone suffering from epilepsy or proving sensitive to such effects.

Elea: a story that investigates the universe and the human mind | Review

Initially, the plot of Elea does not differ much from the classic science fiction narrative: in 2073 a mysterious psychological pathology begins to spread on Earth that afflicts children, making them violent and uncontrollable. The only cure currently available completely erases their personality by turning them into empty and apathetic dummies. The only possible solution to escape extinction seems to be the colonization of another planet. Fortunately, twenty years later, Solace was discovered, a planet with characteristics similar to Earth. Government associations gather to assemble a crew and the Pilgrimage is built, a state-of-the-art ship depicting the hopes of humanity, of which, however, traces are lost as soon as it reaches the orbit of the new world. Thirteen years later a rescue expedition is carried out and sent to investigate the fate of the Pilgrimage and its crew. We play as River Elea, a scientist who joined the mission to find out what happened to her husband Ethan, who took part in the exploratory mission.


Despite the many classical elements, the story is quite different from tradition. One of the things I appreciated the most, even if it seems a contradiction, is that in certain points you simply do not understand anything, but it is the feeling of mystery that wraps the whole game to make it so special. For example, in the world of Elea there is a system called mindscape that allows you to relive past memories, so we find ourselves immersed in two timelines: the present, with Elea on the spaceship, and the past, where we find her pregnant in her home. At some point this technology will stop working and we will go from wandering around the house looking for the keys - the most domestic of situations - to being trapped in a sort of labyrinth inside our mind, full of lights, sounds, colors and pixels, to then return to the reality of the ship.

The Gameplay takes up aspects of the walking simulator come Everybody’s Gone to the Rapture e What Remains of Edith Finch ma con elementi puzzle game that follow one another in the various settings. One of the best aspects of the game is the freedom of action it offers you, in fact you can choose to explore freely and browse around or go directly to the objective. We can interact with computers, read magazines and books, change music and unlock additional dialogues. And here is one of the biggest problems in the game: Elea walks with such slowness as to embarrass the turtles and it is possible to run only for short distances, making the movements long and frustrating and damaging the possibility of roaming freely around the environments. After some time you lose the desire to explore for fear of wasting precious time. 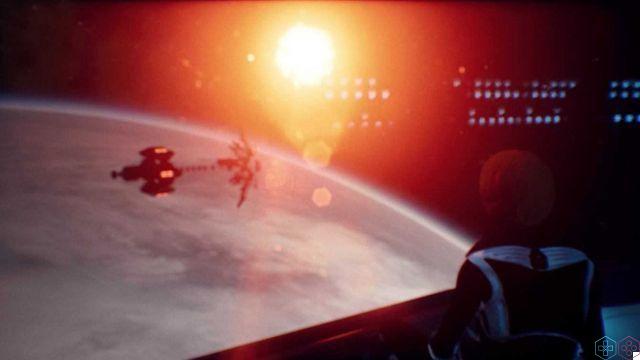 The experience is also slowed down by the lack of clues in certain sequences, which turn out to be unintuitive. It can happen that we spend more than half an hour stuck in a room - often a tangle of psychedelic lights - just waiting to figure out what the game wants from us or for some action to advance the story. One gets the impression that the puzzles have the sole purpose of lengthening the gaming experience and blocking the narrative.

Despite this we are completely captured by thesurreal atmosphere game and story, and we find ourselves moving forward determined to unravel the mystery behind the sudden disappearance of the Pilgrimage and Ethan.

From the beginning it is clear how much the Kyodai team has been committed to the graphics sector and how much it is one of the cornerstones of the game and in many situations I found myself stopping completely just to look around. Each setting, Elea's house, the spaceship and the unreal spaces created by the mindscape, is treated to perfection and in the smallest detail. The strength of this title developed with U is given by the fantastic play of light and particle effects, present in every moment of the game. Music and sound effects are well done, but the dubbing leaves something to be desired and is often approximate, especially in the secondary characters.

The first episode of Elea was immediately revealed to be able to amaze and capture the attention of players and managed to lay excellent foundations for the future of the series and bring a breath of fresh air to the genre of first-person adventures. The title has proved to be a very ambitious and complex project on a conceptual level, but Kyodai has been able to realize it at its best and we can't wait to find out how the following chapters will develop.

Elex review: a mix of medieval and science fiction ❯

add a comment of Elea Review: Episode 1 - The other side of science fiction