After a bit of waiting, here we are on Red Dead Redemption 2. Review that has been waiting for you, but which will tell you everything about the title without ever giving you a spoiler! The Rockstar title will be remembered as one of the absolute masterpieces of this generation. Let's find out the details!

Well here we are. We finally got to complete Red Dead Redemption 2. It is the best video game you can buy at this end of 2018, and not the best of its kind, but the best ever. Rockstar has really outdone itself with this title. Already with Red Dead Redemption, in 2010, he had presented a winning game formula. At the time, however, they clashed with the limitations of the consoles of the time. Today all this does not happen thanks to the strong innovations of this generation! But without getting lost in small talk, let's go into the details.

The first impact with this title was “wow”. Which hasn't happened to me for many years. Already immediately you notice the great attention to every detail of the game world. Everything is animated, and animated well. The impression is that you are constantly in front of a interactive movie. The cornerstone, which Red Dead Redemption 2 focuses on, is extreme realism. A demanding choice, which might not have worked. Wanting to give such a realistic cut to the game means betting, a lot, on the fact that everything must work perfectly. Defects are more easily noticed than in titles where the level of abstraction is such that unusual events are accepted. Well, precisely for this reason we have noticed many small things that are not really wonderful, but they are details so small that in the end we don't even notice them too much. And this is part of the magia di Red Dead Redemption 2. 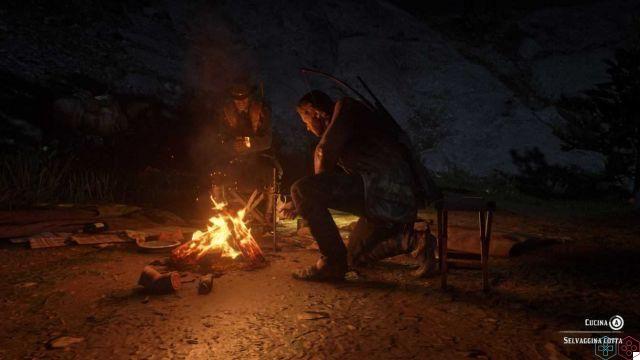 The characters move in a totally natural way thanks to a very complex animation system. In the PS4 version, some have highlighted the presence of an input lag (even substantial) due to these animations, we on Xbox One S have not detected any of this. The response to the commands is in fact immediate at all times, and except for 1 freeze (the fault of which can very well be attributed to the console that was on for several hours) and 2 occasions in which we noticed a drop in frame rate, we did not notice such problems. to affect the gaming experience.

It is all incredibly real. Get on the horse, eat, sleep, shoot and even go to the theater. None of this is left to chance. Immersion is total, and even in long gaming sessions, time flies. And it flies because, in addition to the main story, and the side quests, the world itself is full of things to do. No forcing: everything is perfectly coherent and integrated in this last. And this is where the grandioso Sound Design of this title. The sounds are perfectly real. Perfectly positioned, and even always credible. The soundtrack then lives up to those great pearls composed by the great Ennio Morricone for Sergio Leone's films: perfect and engaging.

Another extremely important aspect to examine concerns the iterations between the player and the NPCs. In fact, for now, the title is exclusively single player. Usually, in each title, one can only turn up one's nose with respect to the "limited" interactions with the latter. We are often disappointed and with the idea of ​​finding ourselves in front of only flat and not very detailed characters.


This is not the case with Red Dead Redemption 2. In fact, Rockstar has decided to bring the interactions with the latter to a level of depth never seen before. Usually only 1 or 2 characters are explored in the course of a title: the protagonist and some of his close "helper". Here, however, things work differently. Each character is excellently curated. Even the passer-by has its own characterization, its own background.

The "main" characters are instead all deepened, both through the quests and through the dialogues. The game world reacts to us, and how we behave. The care, even of the secondary quests, is manic. You will become attached to some characters, and you will hate others. You will always understand what drives them to do what, and you will notice how each of them will always act with total consistency with respect to what their experience will be. Some of them will have real evolutions, others some declines, but the beauty of all this will be to notice how our actions will have influenced their actions.

Doing the quests in a different order will lead to small differences, a few lines of dialogue, which however make us understand how deeply the actions carried out affect the game. Also, if all of this weren't enough the protagonist of Red Dead Redemption 2 is one of the most charismatic characters in the history of video games. Because? It is not for us to say, we invite you to find out by playing this extraordinary title. Every word spent in this direction may not make you fully enjoy the joy of discovering it for yourself. What I can tell you is that Arthur Morgan for me represented everything I wanted to be in the days of the old west.

The dive is what Rockstar is aiming for in Red Dead Redemption 2. Immersion in a world with little abstraction, terribly and wonderfully real. Immersion in a story that after all we could have lived for real at that time. Immersion in many little things that make you want to continue exploring again and again ...

To want to continue living those emotions that only you can find them. The emotional impact of Red Dead Redemption 2 is really important and significant in the life of a gamer. It is hard to find defects, an area in which there is little objective. The only objective defects I have already listed above, to report in addition only a couple of accidents on horseback, between trees and stairs.

Subjectively, however, I was hurt by some quests, secondary yes, but which could have represented a valid option to insert alternative endings hidden as never before in the history of the video game. A pity, but I understand well: being a prequel they had to be linked to the events of the first Red Dead Redemption.

We could discuss this for a long time, but we would touch on points of the plot, which deserve to be experienced firsthand. We have not deliberately focused on how the game works as this aspect must also be a discovery to be able to give your best, and let you experience this deep immersion in a genuine and sincere way at the top of its expressiveness. After all, to deepen aspects of the gameplay, we refer you to this tag.

Open word means "open world". Open in every aspect of the same and such as to leave total freedom to the player. Red Dead Redemption 2 does not change the genre but elevates it to the highest level possible with the hardware of this generation. A title that has 8 years of development behind it, and which brings us excellence on every front. There are no weaknesses, and it is so well done and crafted that there is no real strength because in reality every aspect borders on perfection.

Certainly it is a title not to be missed both for lovers of open words and beyond. If you love video games, this is a must have title. So well done that it can, by itself, push to buy a console. Among other things, it is a very long-lived title, and full of things to do: it could easily take hundreds of hours without ever getting tired. The online component will also arrive in the future: what more could you want from life? We highly recommend it, don't miss this title. Give yourself a nice gift: you will be immensely satisfied.