Bayonetta review is back in a big way on Nintendo Switch

Tremble, tremble, the witches are back. It was the slogan of a feminist movement of the 70s, okay, but the phrase also lends itself very well to the new re-release of the two Bayonettas on Nintendo Switch. We have reviewed them for you

Who is the most lethal, sexy and interesting witch in the world of video games? If you don't get there, we'll give you another clue: until a few years ago you could also find it on other platforms, now only on Nintendo Switch (and Wii U, if you still have it). Nothing? Okay, we'll tell you then: Bayonetta. Created by Hideki Kamiya and launched for the first time on PlayStation 3 and Xbox 360 thanks to funds from SEGA, Bayonetta has had a troubled, but all in all positive, destiny over the past few years. SEGA owns the rights to the franchise, but at the time of opening the stock exchange to finance Bayonetta 2 Nintendo had to intervene, otherwise the sequel would never have been made.

Same goes for Bayonetta 3: the rights are always from SEGA, but now Nintendo also has a certain say in the matter, given that even the third chapter, recently announced, was financed entirely by her. While we wait for Bayonetta 3 exclusively on Nintendo Switch, in the meantime, Nintendo offers us the first two remastered chapters for the new hybrid console. Not much has changed since the two identical titles that arrived on the Nintendo Wii U a few years ago, but for those who have never gotten to know the deadliest witch ever, or who simply want to relive her adventures while waiting for the (probable) conclusion, this is a golden opportunity.

The first chapter of the series

Perhaps many of you will already know the context of the series, but it is worth introducing newbies to the franchise, trying to make it clear why its lore is so fascinating. Bayonetta is the last remaining descendant of the ancient clan of the Witches of Umbra. She remembers nothing of her childhood, she wakes up when she is freed from a coffin at the bottom of a lake, catapulted without mediation into the millennial clash between angels and demons. And the bad guys look just like angels this time.

In an attempt to recover her memory, Bayonetta sets out on the trail of a gem called the Right Eye, belonging to a set called the Eyes of the World (rightly there are two eyes). Her research leads her first to Vigrid, a city on the French coast with strong religious tendencies, then gradually into increasingly terrifying environments up to hell itself. Making his way among hosts of angels, Bayonetta gradually encounters individuals linked to her past, like Luka, who holds her responsible for her father's death. Another respectable and very charismatic character is also the witch of Umbra Jeanne, who possesses powers very similar to those of Bayonetta and with whom she will clash more than once.

Of course we do not tell you more, and we assure you that you have covered just the first two hours of play: the plot of the series is waiting to be discovered, between a pressing climax and increasingly interesting discoveries. Our advice is to buy both titles in physical format: in reality only Bayonetta 2 will be retail, but it will also give you a code to redeem the first chapter of the series digitally via Nintendo eShop. In this way you can retrace the deeds of the Witch of Umbra from the beginning to the current conclusion. 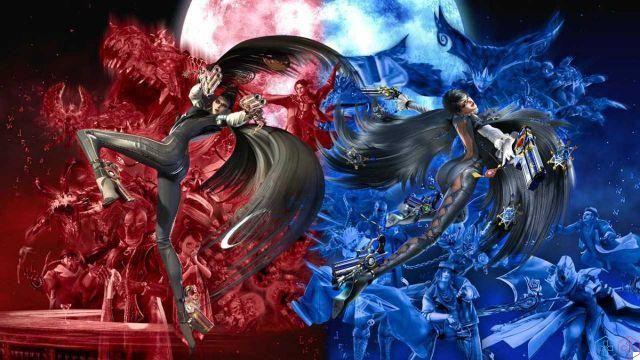 The first Bayonetta on balance is also the episode that most needed an update. Already at the time of its publication on the Nintendo Wii U a few years ago it had received a welcome liposuction, now on the Nintendo Switch things are even better. Don't expect much from a graphic point of view as an end in itself: the game has its age, and for the most part the lighting of the environments has been changed, the frame rate remains more stable, and some minor tweaks seem to have also been made to the polygons. The most important operation concerns the adaptation to the Nintendo Switch laptop mode: for the first time in fact we can always bring Bayonetta with us. The first chapter of the series, in portable mode, loses a bit in terms of fluidity, because it cannot have the additional power of the dock, but it still proves to be functional and fun.

With Bayonetta 2 it's a whole other thing. The game was developed later in the years than the first episode, with the power of the Nintendo Wii U. Which agreed, it certainly couldn't match PlayStation 4, but PlayStation 3 could. It can be seen in the fluidity and stability of the frame rate on the screen, even if it is not the hardware of a PlayStation 4 Pro or Xbox One X that makes it run. technical. As long as you use Joy Con for both: the touch screen controls are one of the most uncomfortable things ever tried, because they are not functional for a frenetic action like that of the Platinum Games.


We will not tell you anything about the plot of Bayonetta 2, because inevitably we would have to reveal too much about the conclusion of the first chapter. Instead, we prefer to focus on the mechanics and features of both titles, as they are common to both. Bayonetta is capable of battling hordes of angels and demons with giant pistol shots and devilish hair, in spectacular performances of often breathtaking combo. The game system, although it requires quick reflexes and also a certain technique, is within everyone's reach, but only those who want to be able to master it to the fullest will be able to obtain the greatest satisfaction. The latter will come in the form of medals, bonus items and cumulative points: some will be announced during, and others at the end of the particular level. 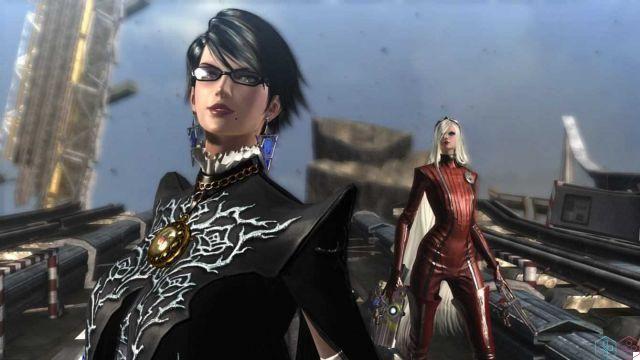 By continuing to perform combos without being interrupted by enemies, Bayonetta will accumulate magic points with which to perform a much more powerful cinematic attack than normal. It will be particularly useful for eliminating the most dangerous enemies, large or aggressive. Because even at normal game difficulty, dying in Bayonetta is really easy, just let your guard down for a few seconds and everything that breathes will jump at us with sharp nails. The whole experience remains fixed at 720 p, which unlike 1080 allows for a more solid technical sector on Nintendo Switch. After all, fluidity counts more than graphics in an action, you will agree.

Bayonetta on Switch, the verdict of the review

The re-release of the two Bayonettas on Nintendo Switch is an unmissable opportunity, both for those who already know the witch of Umbra, and for those who have heard of it. We are talking about one of the most promising and successful franchises of recent years, among other things Bayonetta 3 is currently in development and we can't wait to find out how much it will be able to squeeze the hardware of Nintendo Switch. Furthermore, the adventures of the sexy witch will (perhaps) finally find their conclusion.

9 And now let's wait for Bayonetta 3