Review Huntdown: the value of the past

Neon, violence and power struggles. All the cyberpunk of the 80s is revived in Huntdown, let's find out in this review

Huntdown re-proposes the typical experience of the titles developed for cabinets of several years ago. Unfortunately, however, the so-called "nostalgia operations" have too often turned out to be fallacious. A mere repetition of an old formula in a now different context.

The title of Easy Trigger Games will he be able to evoke all the charm of a distant era, contextualized in the modern videogame panorama? Let's find out together in this Huntdown review. We also remind you that the game is available now on PS4, PC (su Epic Game Store), Xbox One and Nintendo Switch at the price of 19,99€.

The game incorporates all the classic archetypes of the imaginary cyberpunk, which exploded especially in the 80s. In the twenty-first century, in fact, nations collapsed and war destroyed society as we know it today. Corporations are in control of the cities, fought only by criminal gangs who have no mercy. In the middle there are the bounty hunters, or the protagonists of the game, in charge of solving the problems caused by the gangs.

Neon lights illuminate a dark city, Japanese kanji decorate the signs on the streets, and technology has merged so deeply that it completely changes the concept of humanity and human being. Within this context lives Huntdown, in a continuous quotation of the most famous works of the genre. There pixel art enhances this particularly apt art design.

Recalling a style that many gamers will surely appreciate. All seasoned with a synthwave soundtrack that completes the artistic sector for a perfect compendium of the cyberpunk vision of the time. 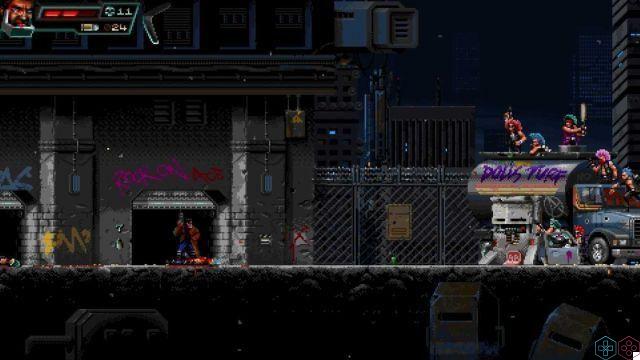 The glance is undoubtedly fascinating. However, the work of reconstructing the gameplay typical of video games of that era is more difficult. Huntdown is a 2D horizontal scrolling shooter. There are 3 selectable characters, which they differ in the basic weapon used as well as for the object to be thrown. It ranges from a small machine gun with a very high rate of fire, but with minimal damage, to a single shot rifle with very high damage.

The differences between the characters are few, but they give that little bit of customization to the chosen style of play. On the other hand, in Huntdown the possible actions are not very many: we run, jump and shoot.

It is also possible to use a large arsenal of different weapons, obtainable from enemies or hidden on the map. There is also a modality local multiplayer, in which two players can tackle the levels in co-op. 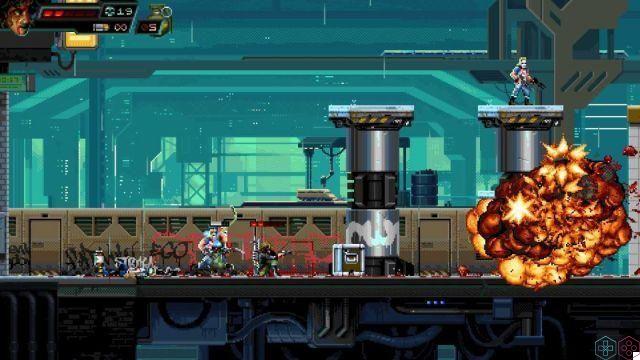 The game consists of 20 levels, divided respectively into 4 areas. At the end of each level the player will have to face a boss, always quite varied. It is a rather simple structure, typical of a classic arcade title of the time, which however manages to be functional to the product. In fact, the levels are never too long, but they manage to keep the pace always high without any interruption.


Despite a not very high longevity, we believe that the amount of content is more than enough, also given the budget price at which the game is offered. Longevity which is also increased by 4 selectable difficulty levels, the latter of which is only unlockable by completing the game a first time.

Unfortunately, the difficulty only changes the amount of hits that can be taken before losing the game. Choice a little lazy which penalizes a potential that is not fully exploited. 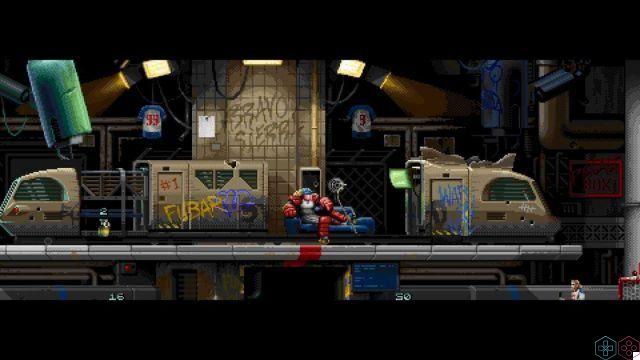 Huntdown though it is not a simple revival of classic stylistic features applied in a context built to enhance the nostalgia of the greatest. In fact, the developers have managed to make the game attractive for everyone, even the less accustomed to the genre, thanks to a series of well-implemented mechanics. One above all is the presence of covers, in fact, the protagonist can take shelter behind a crate or a wall to avoid bullets.

In addition there are also gods checkpoint within the levels, which are managed to perfection and allow to eliminate any type of frustration at the base. In fact, it could arise in someone, also given the medium difficulty calibrated upwards compared to modern productions.

An excellent job done in the game design, however, allows you to avoid sudden peaks of difficulty that could ruin the experience. Finally, the very fast uploads between one death and another return the extremely immediate approach to errors it's pleasant. 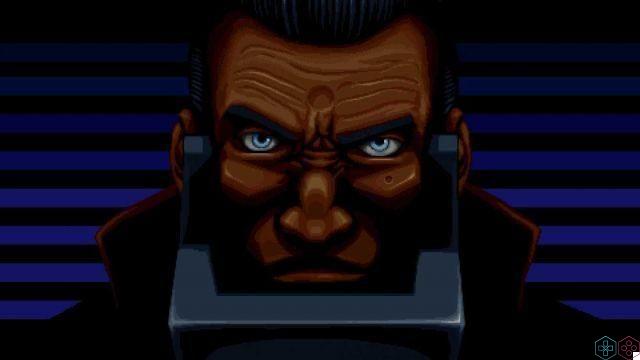 In short, Huntdown is a product with a strong nostalgic imprint, which manages to renew itself and to be valid even today. Easy Trigger Games carries the spirit of the arcade cabinets of the 80s, revisited with intelligence. Overall, the game is attractive both to those who can't wait to remember the good old days, and to those interested in discovering a videogame world that no longer exists, but which lives inside pearls like Huntdown.

Don't be fooled by the pixel art graphics, because you will be holding a fresh product and that will give you a few hours of fun. Maybe then for someone it will be an excellent first approach to a genre now considered a niche, carried out only by smaller and more independent realities, but which is worth discovering. It is also an imaginary that has been a bit lost in recent years, but that is returning to the crest of the wave, above all thanks to the hype generated by titles such as the highly anticipated Cyberpunk 2077.

This Huntdown review ends here, were you intrigued by the title of Easy Trigger Games? Let us know and keep following us on the techigames pages to stay up to date on all the news from the world of video games and more!

8.3 The past meets the present!

add a comment of Review Huntdown: the value of the past