Just Dance 2017 review, how did it go on Nintendo Switch?

Just Dance 2017 did not come out the other day, and not even at the beginning of the year: it arrived before Christmas, as per tradition. And it arrived on almost all consoles on the market: it was logically missing Nintendo Switch, it arrived on the world market only last March 3

If you don't know Just Dance, here you will find other useful information. Nintendo Switch it came with a stock, to be honest, quite small. To date, if we really want to take advantage of more than two Joy-Con of the new console we find ourselves struggling or with Super Bomberman R or with Just Dance Switch. Of the two, however, only the second is really suitable for casual players, or at least it is able to offer attractiveness even for those who do not devote themselves assiduously to video games. Not because it is better, but simply because it is more intuitive: just dance in front of the TV and that's it.

Among other things, Just Dance does not only carry out the social function of "all together passionately": it is one of those brands that more than others have been able to arouse, at least in part, a renewed interest in video games in general, and in rhythm game in particular. All it takes is an interesting list of available songs, bright colors, a not too punishing scoring system and motion controls. These are the pillars on which the title has always been based Ubisoft, which over the years has managed to establish itself as one of the party games par excellence.

Originally Just Dance was launched exclusively for Nintendo Wii (we are talking about something as distant as 2009), but soon the French company took the leap to expand the catchment area and also bring it up Xbox 360 e PlayStation 3. Almost every platform available on the market is currently covered, Nintendo Switch including. And among the very recent innovations we can also mention a useful application that allows us to use our smartphones as a game controller. On the other hand, modern mobile phones have all the technology necessary to detect the user's movements in a precise and reactive way, just like a Wiimote, or the now more recent Joy-Con.


Before Ubisoft returns to delight us, as promised, with the Definitive Edition of Rayman Legends and with Steep, we spent several hours in the company of Just Dance 2017 in its version dedicated to Nintendo Switch. We anticipate the verdict: if you have this console and you are interested in the title we are about to tell you about, maybe you like rhythm games, and finally in life you are not hermits, then the purchase is almost mandatory. 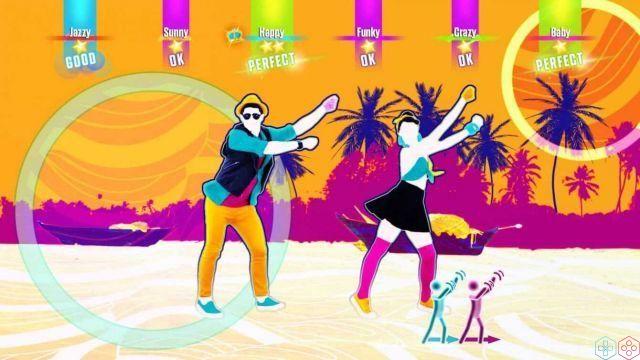 Just Dance 2017 offers what we might consider the Story mode on duty, and it's called Just Dance Machine. The narrative premises are as credible as the snow in summer, but the function does its job properly: two aliens run out of fuel and decide to kidnap poor earthlings engaged in wild dances, in order to transform the energy released by the dance into gas. Are you already believing in the snow in the summer? One more moment.

The formula of the section is very particular. Each challenge is marked by five different types of dance, which take into consideration both classical dances and less artistic movements or even movements that have nothing to do with the dance itself. For example, it will happen that you have to reproduce the actions of an athlete engaged in the leap of the leapfrog. The purpose, however, remains unchanged: to give energy to the poor couple of extraterrestrials. Each test is then evaluated using the classic system linked to motion sensors: by reproducing the movements to perfection, the tank will receive more fuel while less precise movements will give a less generous return.

In short, we will not have to dance songs properly, but rather repeat a series of movements belonging to a very specific category, until an indicator is filled. It is an intelligent, nice and original way to train the user in the types of actions that are less simple to perform, and which are more often wrong when playing a song. An excellent gym, therefore, and not only for those who have never had the opportunity to let loose in front of the Ubisoft title.

Six modes, many styles of play

No, after the "story mode" you will not have finished dancing in front of the TV (or the Nintendo Switch pad). Indeed, if we want to be honest it is not even mandatory to play the story mode, since Just Dance 2017 really has everything and more to offer, varying its basic mechanics as much as possible. The canonical “Just Dance” section allows the user to create their own avatar and skin on the fly, and then start dancing by choosing the initial songs of the package offered by Ubisoft, which we will list below. By playing, playing and playing you will unlock game tokens with which to buy and have new songs available, not to mention that by satisfactorily completing the songs you will also get new avatars and new skins (with this mechanic collectors will get married). 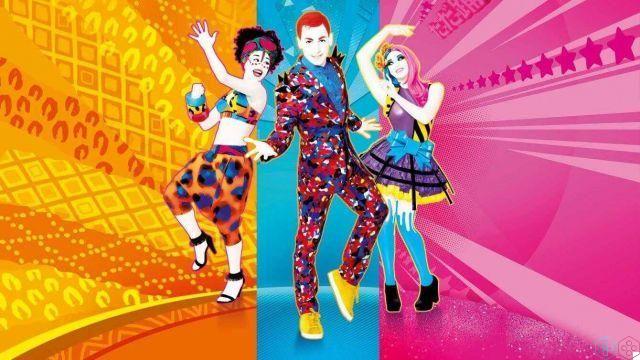 With the entry World Dance Floor you will have access to the online service, which will allow you to challenge the various players online. Just Dance TV allows you to sit comfortably in an armchair and relax for a moment, enjoying the best videos of the community. In Dance Quest you have access to a series of challenges against artificial intelligence, which can be set to Beginner, Just Dancer, Professional or Superstar. The player will have to dance and beat the records obtained by the remaining eight players controlled by the CPU, all on the total of three songs per rehearsal. There are ten basic quests plus over twenty linked to the Just Dance Unlimited service. The last mode is Sweat + Playlist, a section where the player can decide to train with Just Dance 2017 and create their own playlist in order to burn fat. You can also decide to take advantage of the shuffle function and dance non-stop.

And speaking of Just Dance Unlimited, which we mentioned a little while ago: it is a subscription that guarantees access to an online library of over 200 additional songs. Those interested can consider enrolling in the program and pay € 3,99 for one day, € 4,99 for 30 days, € 9,99 for 90 days and € 29,99 for a year. In short, the opportunity for the developers was too good to pass up. However, the Ubisoft title basically contains the following tracks:

Su Nintendo Switch the title is fun, frenetic and satisfying as always: an excellent job has been done above all in the graphic rendering, which, although minimalist in itself, has nothing to envy to its counterparts for other consoles. The style of Just Dance is immediately recognizable and enhanced by choreography and drawings with attention to the smallest details. Also excellent is the response of the Joy-Con to body movements and the general reactivity of the controllers, including smartphones with a dedicated application.

The use of the pad as the only screen on which to play the player leaves us some doubts: one thing is the home TV, another a tablet surface. As long as you play in two there are no major problems, neither space nor screen display: both players see what they are doing. But playing in four? Or even six? It becomes more of a war of shoving for those who try madly to follow the action of the virtual dancers, than a dance competition.

add a comment of Just Dance 2017 review, how did it go on Nintendo Switch?