Ender Lilies Quietus of the Knights review: a pleasant confirmation also on PS4

Ender Lilies is definitely one of the surprises of the year. This metroidvania with a refined style stands out for the care in gameplay and level design as well as for the atypical storytelling. In this review of our Ender Lilies, however, we will consider the PS4 version of the game. For a more complete look at Ender Lilies, go check out our first one Switch version review. Having said that, we just have to go and briefly review the qualities of the title in relation to PS4 version. We specify that for the review you will read we tried the game on For PS4.

Before delving into the technical details, let's summarize in this review of Ender Lilies for PS4 the narrative context. It all begins with the awakening of the young princess Lily within what appears to be one cathedral in ruins. The game immediately passes, without many preambles, to introduce us what will be our helper. Lily will in fact immediately make the acquaintance of a Cavaliere. The latter, in addition to informing Lily about his mission, introduces the player to the first mechanic of the title, which is the basic attack.

The main character's goal is to make her way through a world in ruin and, monster after monster, discovering more and more about his past but above all about how the Kingdom of Finis. The aspect that sets Ender Lilies apart from other 2D rpgs is not the side artistic (which we will focus on later), but it is the style of the storytelling. Each defeated monster, in fact, will allow us to dialogue with him and have an extra piece of the puzzle that will not only highlight one lore thorough, but above all it will reveal important details about the past and about role at Lily. 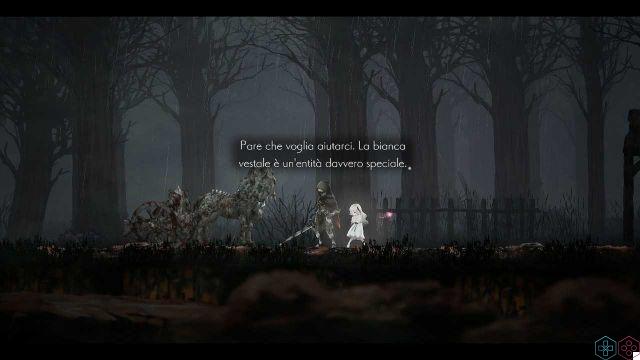 Fans of 2D metroidvania at Hollow Knight will have something to be happy about. Ender Lilies shows up, from the side gameplay, much like other exponents of its genus. On closer inspection, it is precisely for this reason that the game DON'T it reaches the peak of a masterpiece, that is precisely because of this nature of its markedly inspired and indebted to the past of 2D scrolling RPGs. The mechanics are those classical of the genre, the peculiarity lies in the fact that several attacks are will unlock as we go on in the adventure and defeat the main monsters. These, once defeated and listened to the relative dialogue, they will reward us with a new skill melee to use.

The combat system consists of 2 slot to be filled with up to 4 skills each. In the game, however, we will only have access to 3 of them to be assigned to as many keys (obviously excluding the jump key). The adventure presents itself relatively relatively at the beginning simple, with easy-to-read enemy attacks and a more or less linear progression. Moving forward, however, the curve of difficulties gets up. Confront enemies in the air and on the ground combining the various abilities, available in limited attacks and with a system of cooldown, it won't be easy at all. These late stage situations can make your games a real one hell. Also considering that in some breakdowns the game will turn into a real one shoot ’em up. 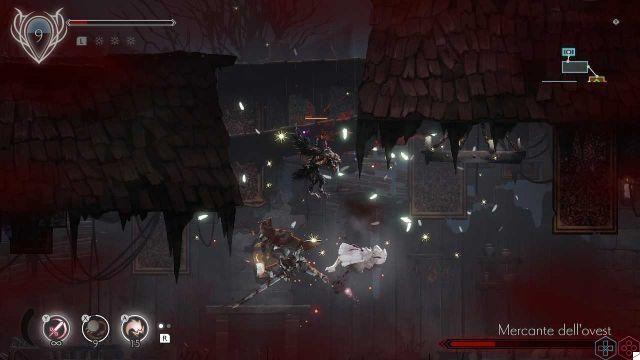 From the point of view aesthetic instead, Ender Lilies is a marvel. Backdrops Gothic and extremely well-kept decadents are balanced by the light presence of the protagonist in the center of the screen. The various depth planes combining with the different visual effects and particles in the foreground creating a remarkable visual impact. The style and general tones, albeit with influences already seen in other titles, they remain original, above all because they manage to give good the idea of ​​the narrative context. On the contrary, the design of the monsters is not that inspired, but overall it works. From the point of view technical the game does not disappoint. Recall that in this review we tested the title on PS4 Pro.


As for the resolution, this stands on an honest one 1080p and you appreciate, certainly more than on the Switch version, the contrasts light dark and the nuances of some effects such as the torches that illuminate with soft light (net of the type of screen used). If several users had encountered some read issues legate al frame rate su Nintendo Switch, su PS4 the title behaves more than that admirably. The frame rate remains in fact a lot stable, even in the most agitated situations. Uploads are a lot too rapid, either for reloading the game after dying or using the journey Quick. 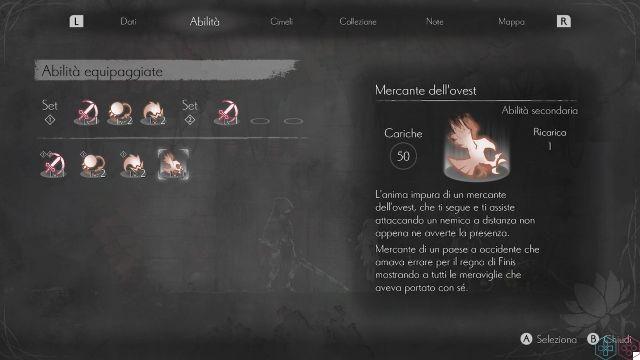 We have seen in this brief review of Ender Lilies played on PS4, that the title maintains its solidity and fluidity. You can complete the adventure without particular technical problems. In summary, if you are looking for a Metroidvania challenging but at the same time with more style and narrative addictive, Ender Lilies is definitely for you. So find out what happened to the Kingdom of Finis in this fantastic adventure. Recall that the game is available for all consoles of old and new generation, including Switch and, of course, PC.

To buy securities in discount, go to our Instant Gaming link! For further news and insights, follow techigames pages.

9 Among the best of its kind even on PS4

Essays On Empathy review: an imperfect manifesto of style ❯

add a comment of Ender Lilies Quietus of the Knights review: a pleasant confirmation also on PS4