In this review we will analyze in detail Super Animal Royale, a free-to-play battle royale in some respects very particular, but also which, as we will see below, takes many aspects from the well-known Fortnite

First announced in 2017, Super animal royale it presented itself as a battle royale with two-dimensional graphics, characterized by anthropomorphic animals made in cartoon style that face each other in brutal fights. Launched early access in December 2018, the title has been so successful that the team has been working on it over the years. Flash forward to Future games show of Gamescom 2021, during which the publisher Modus Games, together with the developer Pixile Studios, announces that the game has been officially released for PC, Nintendo Switch, Xbox One, Xbox Series X|S, PS4 e PS5 (and coming soon also on Google Stadia). So below you will find the review detailed Super Animal Royale, in an effort to help you figure out if the game is your thing or not.

What exactly is Super Animal Royale?

Before leaving, however, we must try to define the title in yours membership categories. From the images you can easily guess what it is: as already mentioned before, Super Animal Royale is a battle royale with 2D graphics, isometric top-down view and style of play from stick-shooter. Previously playable in early access only on Steam and Xbox, the title features more than 300 different types of player-controllable anthropomorphic animals, along with more than 600 cosmetic items which allow the player to customize their fighter. All this is accompanied with various objects and items (including firearms of any kind, but also fast means of transport such as hamster balls or giant emus) that make fights varied but brutal. Having said the official version, let's proceed to the juice of the Super Animal Royale review. 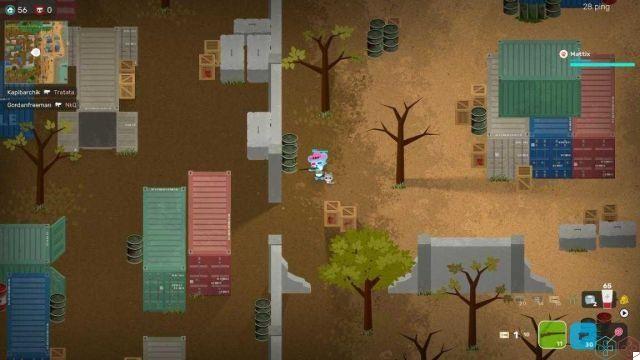 The entirely two-dimensional graphics feature a large roster of anthropomorphic animals. Initially we only have available Super Fox, Super Bear, Super Skeleton Cat and Super Tiger, but we will notice pretty quickly in the section Laboratory how many animals can be unlocked later, by obtaining DNA currency. Each animal also features various unlockable skins, each of them always in the same section. As we will quickly see by playing a few games, the graciousness the style of each of these animals collides with the brutality of the fighting that take place during matches, and gives the game that touch of madness which is always appreciable.

All these cute animals can be further customized thanks to the large number of cosmetics present in the game. Starting from clothes and weapon, up to to the pet or tombstone that appears when you die, all of these elements offer a very high level of aesthetic customization, which will make us appreciate even more the characters we are going to make. It should also be added that all the progression systems present in the game serve to unlock only and only these aesthetic items: the objectives, the progression of the season pass (obtainable via DLC) and the daily and weekly challenges therefore they have as a reward only elements of an aesthetic nature, without the risk of power-ups being distributed that ruin the balance. 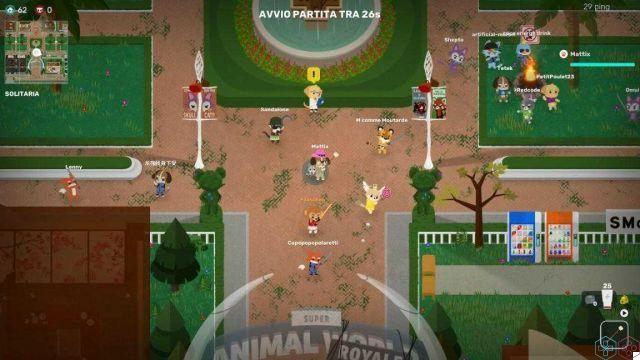 Before we talked about a wide personalization of the characters from an aesthetic point of view, but also for more practical things, like the controls or the setting of the matches the game, the title performs admirably. Get used to it a somewhat annoying menu to navigate with controller (due to the keys that, when selected, are not clearly highlighted), the game offers the possibility to fully customize the controls and options in general. Also as regards the matches, we have several options available to face the game as we prefer: the modes are Solo, Duo or Teams, and for each of them we can choose whether to keep the cross-play and if, in cooperative modes, we want to wait for all the players necessary to complete the team to arrive or if we want to be thrown into the fray without necessarily needing all the allies.

Unfortunately, if for some reason we wanted, on Nintendo Switch, to remove the cross-play mode, the number of players in the game calerebbe drasticamente. The Switch version of Super Animal Royale seen in this review has worse performance compared to other platforms on which the game is available, with times when the drop in framerate it is inevitable (especially when there are many players on the screen and when we are thrown into the map at the beginning of the game). Therefore, despite the fact that the game does not rely on one at all competitive component, those wishing to face it with this mentality would find an obstacle in the version of the game for Nintendo Switch. 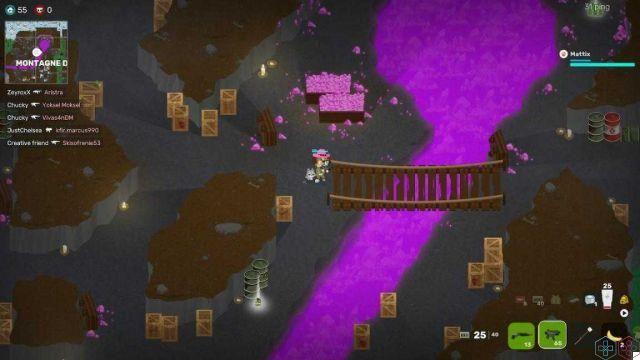 Having talked about all the aspects that are around the actual game, now we wonder how it all works when we are in-game. After starting a game and waiting for all the necessary players to log into the Waiting room, we will find ourselves riding a giant eagle that crosses the map in a random direction. Just like with the Battle bus of Fortnite, it will be up to us to decide when to throw us and where to go. At this point we will find ourselves in the middle of a large map divided, again as in Fortnite, in different biomes and with so many different locations containing a lot of loot, and therefore we will have to head to the safe area from time to time to avoid the toxic cloud which will expand more and more.

Continuing with the parallels with the Epic Games game, all weapons have various rarity levels, with the icon having a background clear for common, green for uncommon, blue for rare, and purple for epic. These fairly standard items are flanked by other very peculiar objects, such as the hamster balls or emù as a means of transport, the grenades-skunks that release clouds of poisonous gas, the banana peels to trip opponents and much more.

Each player's life total, represented by a life bar side by side with that armor (also divided into three levels of rarity), they are very few compared to a standard battle royale: this, combined with the extreme ease with which the loot is found, makes the games much more fast and dynamic than what one would expect. The idea of limit the player's view based on the obstacles it is also nuna good choice, as it obliges the player to keep the level even higher concentration and to put in against also the tactical importance of its positioning 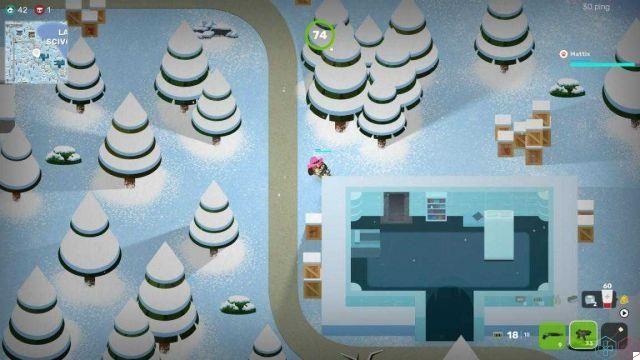 Proceeding towards the end of our review, we can say that Super Animal Royale is a fast and dynamic battle royale experience, easy to learn but difficult to master. The clash between the stylized and graceful graphic style and the brutal and dynamic gameplay help to create a particularly fun and enjoyable, in which some anthropomorphic animals that we could find in a children's cartoon yes they clash in battles to the death with firearms, grenades, but also hamster balls, skunk bombs and banana peels. What instead results less inspired it is the structure of the game, which, as we have seen before, is often too close to that of Fortnite. Not that the similarity of the game mechanics between the two titles is a problem in itself: however, we can say that it is a pity that Super Animal Royale is not completely able to stand out for its strengths, instead having to adapt to a game formula commercially successful, presumably to be able to attract audiences.

What do you think of Super Animal Royale instead? Waiting for your response, we just have to invite you to stay tuned to the techigames pages to get news, reviews and previews about the gaming world and beyond. If you prefer to buy game keys at discounted prices, you can do so through our link to Instant Gaming.