Gust has decided to renew the veteran Atelier saga with the new Atelier Ryza: Ever Darkness & The Secret Hideout, find out with our review if this rebirth has been successful

Considering that the Atelier series was born in 1997 on the very first Sony Playstation and that since then an infinite number of different chapters have been produced, including "main" episodes and secondary titles, which a rejuvenation of the brand was necessary was by now consolidated. The main fear of fans and industry experts was that a third installment, after Atelier Lulua and the spin-off Nelke and The Legendary Alchemists, in just one year would be a bit too much, a gamble by Gust to revive the fortunes of the series. a little too much ahead of time. Then came Atelier Ryza: Ever Darkness & The Secret Hideout (from now on only Atelier Ryza) and we all changed our minds a bit.

Released in Europe on November 4st on Playstation XNUMX and Nintendo Switch, Atelier Ryza has immediately shown that it wants to be a new starting point for the brand, a title that aimed at the rejuvenation of the mechanics and the aesthetic sector as the main objective, without however distorting itself. In short, a wink to newbies, but of a quality that can satisfy even veterans. Will they have succeeded? Let's find out together. 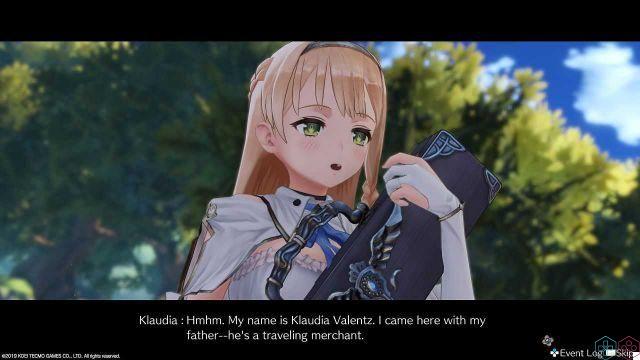 We need to know how to renew ourselves

Country life, as we know, is notoriously close to the protagonists of any medium of oriental origin. The same goes for ours Reisalin Stout, known by all as Ryza, and his two trusted friends Lent, a young swordsman as muscular as he is stubborn, and Tao, a little bookworm. Born and raised on a small island detached, both for customs and for mentality, from the mainland, the three boys are always looking for new adventures to live.

One day like many others they decide to "borrow" an old boat, and from a forgotten port near Ryza's home they leave for the mainland. In the midst of exploration, they have the good fortune and misfortune to save the life of the young Klaudia, daughter of a wandering merchant who settled in the city and, shortly afterwards, of get to know Empel and Lila, a weird alchemist and an equally bizarre warrior, equipped with all the fanservice possible enclosed in two not so small areas of her body. We leave the imagination to you.

From here on, a flurry of events and revelations about the island's past will carry you forward into the main plot, which will last about thirty hours if you decide to go straight, but it can double if not triple if you want to aim for 100% completion of the title. We do not want to reveal anything else because, although rather simple, the screenplay of Atelier Ryza has its exciting moments and interesting implications. However, it remains on the levels of the previous Gust productions, certainly pleasant, but by no means noteworthy. 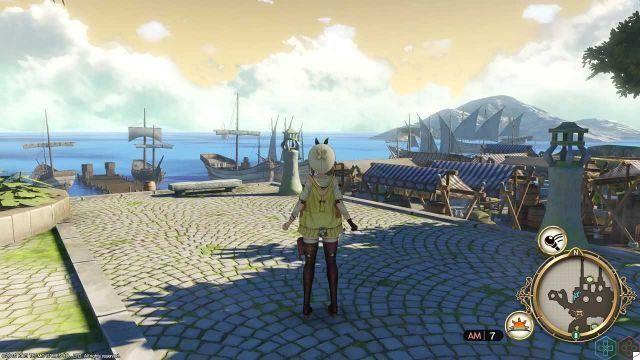 Interesting instead characterization and development of the protagonists, each with a specific dream or goal, but united by the desire to travel and discover new places. There is an underlying lightness typical of adolescence, with Ryza who wants to discover the magical world of alchemy, Lent who wants to become stronger so as not to depend on his drunkard father, Tao who wants to learn to master the ancient language of the kingdom of Klint. Three completely different goals, three completely different friends, but with something in common: travel.

As we have already said, Ateler Ryza has been completely renewed in every respect. Both the gameplay and the general technical apparatus have been thoroughly reworked, but not completely distorted. Let's start with one of the main elements and certainly the most tedious to deal with: Alchemy. 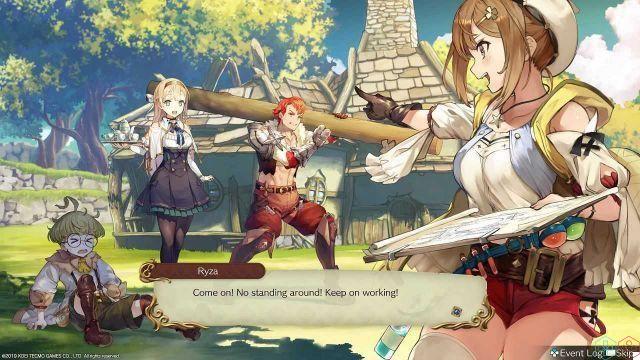 The crafting in Atelier Ryza is based on the "Material Loops", real Nodes to which we will have to add increasingly higher quality materials to unlock the next ones. The more the raw materials are precious, the more nodes we can unlock, the more the final quality of the object we will create will be higher. Explained in this way it seems simple, but we assure you that it will take a few hours to get hold of and understand its effective immediacy, also thanks to the hasty and quite clear tutorials, which will indeed make more confusion than anything else. Our advice is in fact not to rely on the latter at all, but to do some initial tests to understand the mechanism.

If in the previous Ateliers for discover new recipes it was necessary to find new materials, defeat new monsters or make a triple jump back pike, in Atelier Ryza it has been made easier and more fun. Many already known recipes will in fact have some “strade alternative” to go, unlockable through some Nodes that may require special and optional materials for the purposes of the original formula. If you have one, you can start a new path and thus learn a new recipe.

All this is obviously made possible by long sessions of collecting materials around the maps of play, never actually too vast, but always full of ravines and things to discover. Another juicy novelty compared to the previous titles of the franchise is being able to finally teleport to the various areas that make up the macro-areas, when previously one had to necessarily return to the beginning of each of them.

As the game progresses you will unlock more and more mechanics, from the possibility of resynthesizing an already created object, to the forge to upgrade weapons, to a machine that will allow you to create micro-worlds to explore to collect materials and defeat particular monsters and much, more. A disproportionate wealth of content which increases even more in the end-game and which tickles that mania for collecting that each of us has. 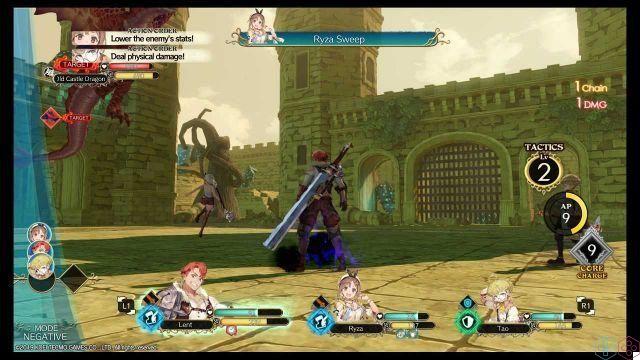 How to Fight – Review Atelier Ryza

Also revisited the combat system, which has gone from being turn-based to a more real-time experience. You can control one character at a time during the fights, switchable with R1 and L1, in a party consisting of three players. Each normal attack you launch will generate APs, Action Points, which you can immediately spend to use the characters' abilities or accumulate to fill the circle that will appear on the right of the screen and, once done, use them to increase the number of normal attacks that can be carried out in a single turn and their power.

There are two modes to control the AI ​​of allies: the negative mode, in which they will not use the APs in any way, and the Aggressive mode, activated which will not spare a single hit. Also interesting is the new object management mechanics, which can be equipped in Ryza's Atelier in different quantities for each individual character in the respective Core Item slots. Using them in battle the items will not disappear, but they will consume a Core Charge, available in limited quantities and refillable or by resting or temporarily sacrificing another of the equipped items. 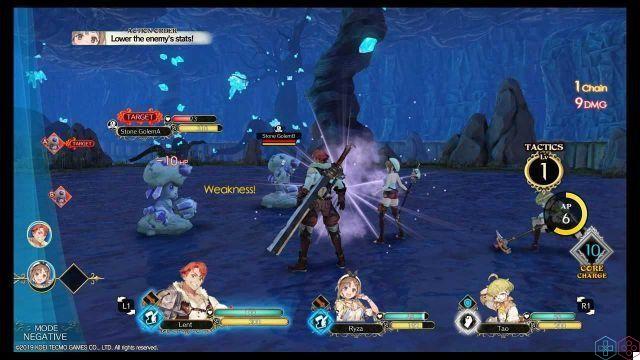 The fighting strategy is further expanded by the Quick Action and by Action Order. The actions of the members of the party will be marked by a Timeline placed on the left of the screen. Using the Quick Actions we will be able to immediately take command of a character at the cost of 10 AP to allow him to use a Skill or an Item immediately. This will also make it easier to execute Action Orders, devastating moves that our companions will use if we fulfill their requests, which will more often be the use of a particular object or skill.

A combat system that, like Crafting, must initially be understood and internalized, but which can give great satisfaction especially against the toughest enemies to knock down. Also noteworthy is the great possibility of customizing the characters, who can be equipped with a weapon, armor and two accessories each and who will learn, during the adventure, always new skills. The combination of all these factors generates a satisfying and rewarding combat system that will give its best in the advanced stages of the game. Perhaps we have noticed an excessively easy background, especially if you carry Alchemy a long way from the early stages of the game. Again, ignore the tutorials.

Another notable addition is the ability to customize Ryza's Atelier, both in the appearance of the interiors and exteriors. You can add new furniture and modify existing ones according to your personal tastes, giving life to your Atelier Ryza. The excessive ease we were talking about a little while ago is amplified by the possibility always granted to teleport to the Atelier to rest and leave the materials recovered during the exploration in our trunk. Dying will be difficult, especially in the advanced stages, and in any case it will not bring great penalties if not the loss of a part of our loot. Sin. 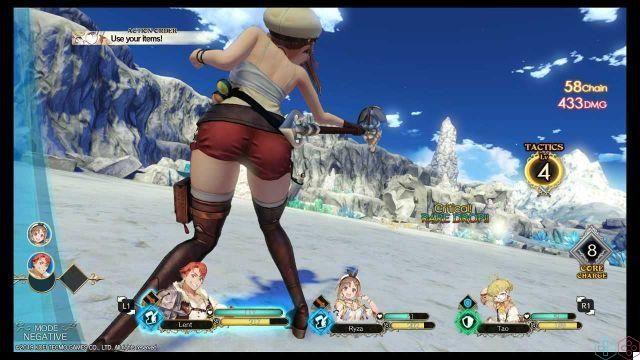 Let's now move on to the technical side, which has also been remodeled and modernized according to the most current standards and canons, coming to resemble more a Tales of, not that this is a defect. Our test took place on a PlayStation 4 Pro and we had no performance drops of any kind. The game world is simply gorgeous, full of color and detail, both as regards the interiors and the exteriors. The game maps are detailed beyond words, very recognizable and all different from each other. Too bad the same cannot be said for the enemies, who will always present the same models, different from each other only in color.

On the other hand, the polygonal models of the protagonists are incredible. Simply beautiful and detailed beyond words, with rather fluid animations and certainly much improved compared to previous titles in the franchise. You will spend hours and hours a look at Ryza's perfect thighs, upon which an entire marketing campaign was based, and we can fully understand why.

The sound sector is also noteworthy, with soundtracks that, although repeated a little too often, are catchy and suitable for any context. Excellent Japanese dubbing, of a superb standard. The Spanish localization is also missing in this chapter. As always, English text walls could be a big stumbling block for those unfamiliar with the language. 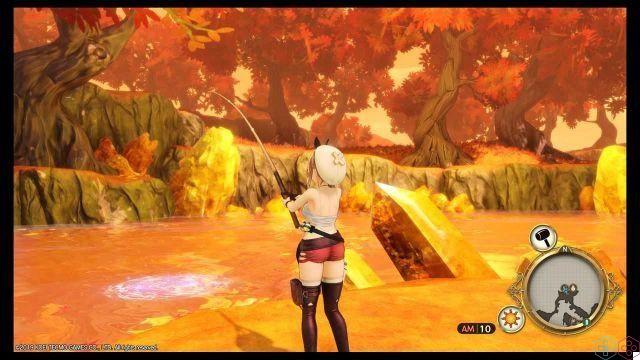 Summing up: don't read the tutorials

Concluding our review, Atelier Ryza: Ever Darkness & The Secret Hideout is a great starting point for the Gust series. In a colorful and highly detailed world, you will be able to take command of the young Alchemist Ryza and explore every single ravine in search of that single and unobtainable material that will allow you to create the definitive version of your fearsome weapon and much, much more. Fun and exciting, revamped from the ground up, perhaps a little too simple and still definitely improvable, Atelier Ryza will keep you glued to the screen for hundreds of hours if you decide to complete it. The important thing is not to read the tutorials.

add a comment of Review Atelier Ryza: Ever Darkness & The Secret Hideout