Review Call of the Sea: the hesitation of reality

Call of the Sea is the first Out of the Blue Games title coming to Xbox and PC platforms: here's what we think in this review

Among the many authors who have dedicated themselves to fantastic narrative over the last century, Lovecraft he is certainly one of those who most of all has found fertile ground in the so-called nerd world. Board games, paper role-playing games, digital games, comics, movies - it's a story that doesn't need to be repeated. Nevertheless, we believe that few have managed to recreate the narrative modes of the Master of Providence outside of non-literary contexts.

In his essay "Fantastic literature", the critic and philosopher Cvetan Todorov classified the fantastic as the hesitation felt by a living being in the face of events that cannot be explained by natural laws. When the hesitation ceases to exist and the mystery is revealed, we then move on to the genre of the strange or the wonderful.

Lovecraft also thrives on hesitation, whether of its characters or its readers, and this is the aspect that characterizes it the most. Much of the productions inspired by his stories, on the other hand, seem to dwell on his horror side, made up of monstrous creatures and forgotten ancient civilizations. As we will see in this review, the writers of Call of the Sea have proven that Lovecraftian hesitation can be reread also to send a message of hope.

Out of the Blue Games' debut feature arrived on December 8 on the Game Pass. Microsoft's service, as we have already explained elsewhere, allows the production and distribution of smaller titles that are far from the tastes of the market. Although it is still difficult to predict how much this new economic model will affect the most expensive works, we currently don't have much reason to complain. Thanks to the service, Microsoft has managed to fill holes in its lineup, churning out seven exclusive titles over the course of a year, almost all of good - if not excellent - quality.

Also in this case we are facing a very valid work, which is not too concerned with pleasing the more general public. We hope that a truly literary dignity of the media will soon be achieved, far from the verbs we commonly use, often belonging to the semantic field of violence and competition.

In short, in this review we would like to tell you about Call of The Sea as a fantastic story, rather than as a video game. 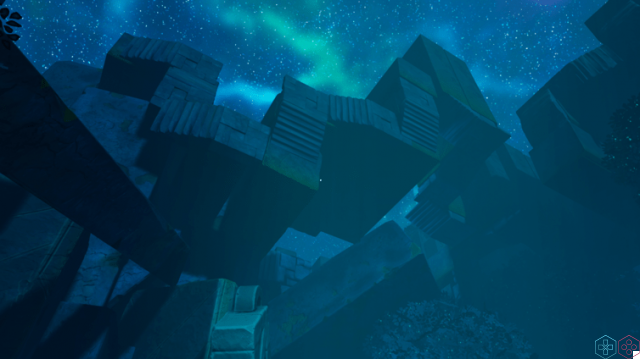 Never Trust a Document - Call of the Sea Review

We will open our Call of the Sea review with one of the most important teachings of philology: never trust a document! You never know who could have written it, nor if the words contained within it tell real events or data. Since the time of Manuscript found in Zaragoza, seminal work of Jan Potocki, the use of this narrative device serves to insinuate the seed of doubt in the reader. Did what I read really happen? Should I believe the narrator who tells his stories in the first person?

Norah Everhart, the protagonist of this adventure, she must have believed the letters of her husband Harry, who left for the Polynesian islands in an attempt to find a cure for his wife's illness. Long since Harry appears to have disappeared, for which Norah decides to follow in his footsteps, despite the difficulties related to his health condition. Her skin is covered with strange spots and the strength seems to leave her more and more every day; more, some strange dreams haunt her and they seem to recall it to a distant and impossible to define place.

Call of the Sea opens with a dream, before reopening our eyes and finding ourselves inside a cabin. From the beginning the title offers us a narration that is made up of documents. We will be able to browse Norah's diary at any time, reading her thoughts and reconstructing what happened before the actual story began. Not only that: we will also be able to listen to his thoughts if we decide to analyze one of the many details of the setting.

The essence of Lovecraft, therefore, is already present in the narration through documents and in the story in the first person. Once Norah has landed on the island where the main events will take place, of course, we will also come into contact with events and entities that do not belong to this world, and those who know the American author will already know what we are talking about. Call of the Sea, however, does not want to tell the materialistic and visual Lovecraft that it was assimilated by mass culture.

The emphasis on dreaming and what cannot be seen is the pivot of the work. In a particular moment we will be shipwrecked on a beach devastated by a storm. On the rocks in the distance it will be possible to see an indistinct shape, blurred by the rain. The protagonist will not recognize her. Is it a man? Or is it something else? We still have the doubt. There is no answer. The hesitation of the real has manifested itself in its totality. 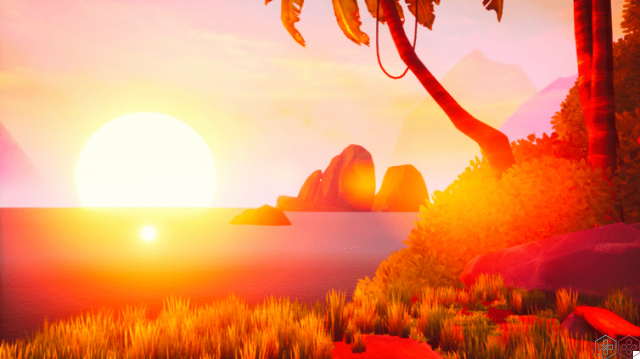 The novel and reality - Review Call of the Sea

Out of the Blue Games he did not make a distressing work, as one would expect from a similar setting. Norah, as she explores the mysterious island, will begin to improve in her health conditions. The player, along with her, discovers a dormant vitality, as if his (our) disease was slowly starting to wear off. It is the call of adventure, surely. The human mind, moreover, is prone to forget every problem when it is subjected to new stimuli.

Yet, Norah is also attracted by the call of the sea, which is then the call of Nature, but also of the dream and the unreal. Put aside the troubles of everyday life and an unsatisfactory reality, the only refuge is that which cannot be understood and that does not reason according to the logic of scientific ideas. Norah's is an escape from the world of science, which will allow her to discover a new existential possibility.

Call of the sea it doesn't talk so much about human sacrifices and creatures from outer space deep (these elements are present only in the background), but it is an investigation of the individual and its relationship with reality. The narration is handled with great elegance and has no downtime, despite the slow progress of the title. For lovers of choices at all costs two different endings are also available, which allow the player to give their own personal touch to the story. Both seemed justified and absolutely plausible to us. Without the need to exceed in moments of too tacky pathos, Out of the Blue tells a delicate and deeper story than it might seem. 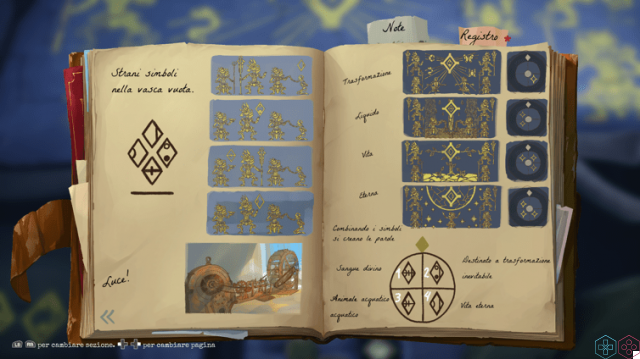 Don't call it Walking Simulator - Review Call of the Sea

Call of the Sea is not a walking simulator. We are very far from the anti-play dynamics of titles like What Remains of Edith Finch o Dear Esther. We are more on the part of Myst and the old first person graphic adventures. In fact, the work of Out of the Blue is punctuated by the solving various puzzles that we will have to face to proceed along the six chapters of the adventure. The playful element is therefore very present and it is also made with a certain care that we have not despised.

There will be no inventory and the protagonist's interaction with the game world will take place only through elements of the setting: levers to pull, buttons to press, pillars to move and much more. Whenever we find a clue to solve the puzzle, Norah will score something in his notebook, which will become the basis from which to start thinking about what to do.

If the first puzzles are simple enough, starting from the middle of the title we will have to squeeze a lot of our brains to understand what to do. The development team, however, has really made available to the player all the evidence he will need, making some very complex sequences, but equally fascinating, which have impressed us and have also taken us back in time, when products of this type were much more common.

The puzzles are all different and the game has never bored us. We are far from the monotony of other similar works, which sometimes require you to always carry out the same action in different contexts or variants. The authors have made an effort to infuse some variety into their product, and it will go from having to lower a bridge to the reconstruction of a dead language using some rock symbols. In six hours we had more fun than ever to connect everything every time, feeling great satisfaction once we arrived at the solution. 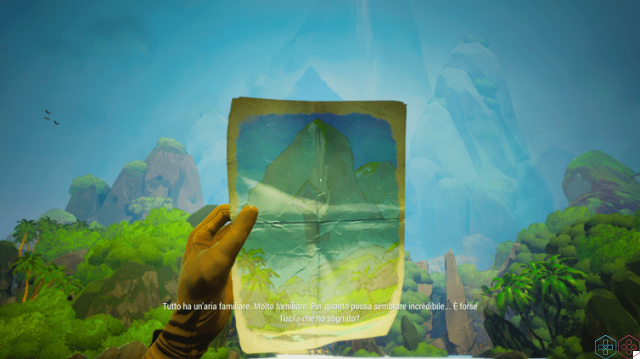 So many parrots - Review Call of the Sea

Most of the adventure is set on a tropical island, rich in vegetation and mountainous paths and parrots. Call of the Sea's art direction favors simple textures and stylized polygonal models, focusing more on colors and on the effects of light. The result is very similar to what we already enjoyed in Sea of ​​Thieves, albeit with lower detail and with perhaps a wider variety of settings. Norah will often have visions that will take her to remote and undefined places, such as deserts and dark ocean depths. The result is highly effective and we enjoyed the reconstruction of the ancient Polynesian ruins. The exotic touch of many Lovecraftian tales it was perfectly recreated.

Where Call of the Sea fails is, unfortunately, on the purely technical side. Not so much for the stylized and cartoonish aspect used by the developers, as for some annoying graphical errors. In some sections, passing from one place to another, we have seen conspicuous delays in loading entire models - for example a whole group of tents. It's not too big of a problem, but it certainly spoils the opera's splendid atmosphere. The frame rate, on Xbox One, is also a dancer. It is usually stable on sixty frames per second, but there are also noticeable drops.

These defects do not affect the general experience too much, since we are not talking about an action or a shooter, but it is still a shame that they exist. Dubbing is in English only (there are Spanish subtitles) and is limited only to the voices of Norah and Harry: both the actors were very good. The soundtrack also seemed very good to us, offering songs with delicate and relaxing features, appropriate to the context. 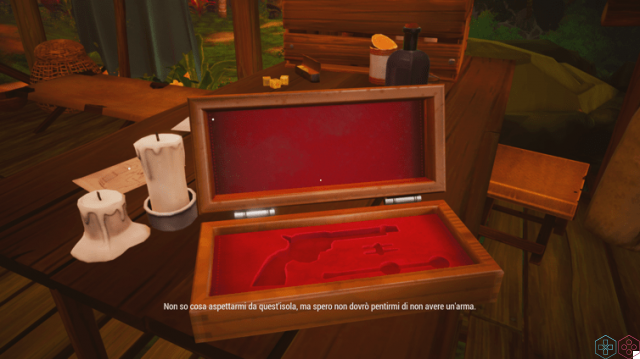 At the end of this review, we can say that Call of the Sea is a great title in almost all respects. We are faced with a very intelligent reinterpretation of Lovecraft's works and a beautiful old-style graphic adventure. The ambitions of Walking Simulator are present, but they are enriched by complex and fun puzzles who don't care too much about making the player mind-numbing.

Most of all, though, we were struck by the great literary quality of the work. Out of the Blue has masterfully recreated the hesitation of reality theorized by Todorov, and which occupies so much space in Lovecraft's work. The developers understand very well what makes the Providence Master so special: not cosmic horror - not only that; but the reader's doubt about what he is told. That is why Norah's adventure can afford to be relaxed throughout its duration.

Have you tried Call of the Sea? Let us know in the comments and stay on the techigames pages for the most important news on the world of video games.

add a comment of Review Call of the Sea: the hesitation of reality