The long-awaited pirate open world has arrived, but the result is not the best. Let's see in this review how One Piece World Seeker performed on PlayStation 4

The world of pirates has never been so open world as it is in One Piece World Seeker. The game developed by Ganbarion Co. and distributed by Bandai Namco Entertainment looks like an ambitious project, but the result is somewhat disappointing. Let's see together the weaknesses and strengths of this title in our review.

Our journey begins on this mysterious island to be discovered in the as Luffy. The pirate captain, initially, will have to explore this world to find your crewmates. Although the island is quite large with very particular inhabited centers in full One Piece style, it turns out to be very empty and devoid of stimuli.

As we said One Piece: World Seeker catapult Luffy and his travel companions into a new adventure. It all starts with the landing place by Luffy and the others on Heavenly Prison attracted by a amazing treasure that turns out to be a trap. The first unpublished character that is presented to us is Isaac un member of the Navy, director of the Heavenly Prison, which rules by force the Prison Island. 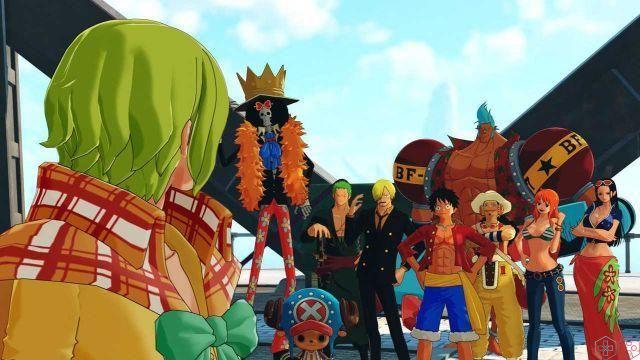 Later it makes its appearance Jeanne, leader of the anti-Navy faction who is fighting with all his might to oust the government from the island. And it will be Jeanne who will help Luffy to find his crew starting from Chopper. We will find ourselves exploring an island that swarms with members of the navy who will try to hinder us. We will also find many characters from the saga of Eiichirō Oda.


La first part of our trip will turn out a lot tranquilla (sometimes too much) with enemies who will barely manage to take away any life points. The situation becomes quite different later on, when we find ourselves fighting very strong and fast enemies, even if not irresistible. The main difficulty in fact does not derive from the opponents, but from a very disappointing system of locks and cameras. Although our enemies are locked in fact, the camera will not follow them, making the various clashes of One Piece World Seeker very complex compared to what they are. Furthermore, follow your opponents with the camera it will not be easy, both for their speed and for the slowness of the same. 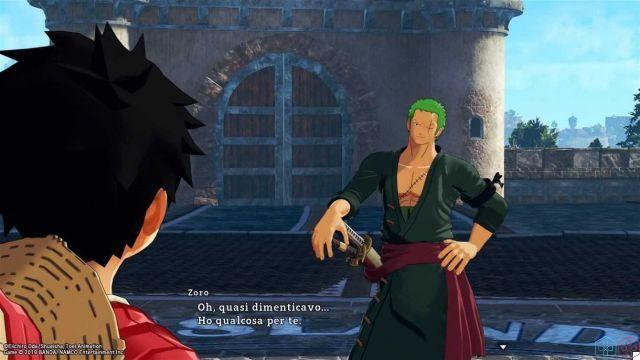 Not to mention the boss fight far from being called spectacular, in fact the combat of the latter it is a great deal intricate. The gameplay turns out to be somewhat repetitive and, in the long run, also heavy. The various marines will not be a demanding pastime and to complete the various missions we will be forced to move continuously back and forth on the island. To our rescue comes the fast travel that will allow us to reach the various points in a short time, but i slow uploads they will also make its use heavy.

One Piece: World Seeker features a component defined by the System Karma present in the game: the characters and factions of the game will increase the satisfaction towards us by completing specific tasks; reached 100%, we will unlock a dedicated mission.

Il Luffy's combat system si va ad enrich with time through the acquisition of new skills, which will allow him to perform spectacular moves taken from Oda's original work, among the most famous we find the Red hawk e l’Elephant Gatling Gun. Luffy can also enhance with equipped accessories, the latter are found in the breakage scattered around the island, or you can make them on the Thousand Sunny. 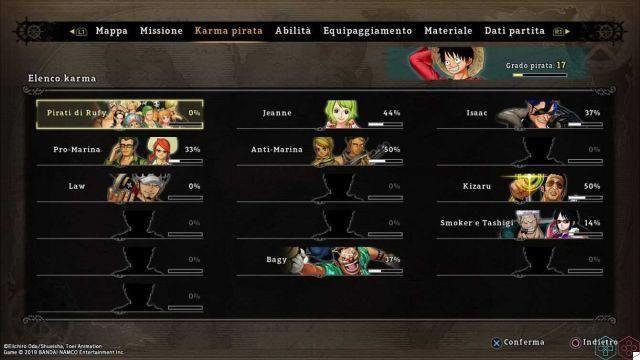 Furthermore Straw hat presents two fighting styles; on the one hand we have one basic style based on light punches and kicks, this mode favors a quick fight of the protagonist that allows you to dodge the attacks of the enemies. On the other hand we find one more aggressive style, which focuses entirely on brute force making i movements by Luffy more lenses and to defend oneself it is necessary to perform parades.

Luffy and the others characters are well crafted but at times devoid of expressiveness, As well as ordinary citizens of the Island which appear to be all equal. Instead the Thousand Sunny was made with some care, and it's almost thrilling to get on it for the first time. For what concern audio compartment, it is characterized by a very nice and engaging soundtrack that will accompany us on our journey. They will also be present some dialogues, though fewin original language. 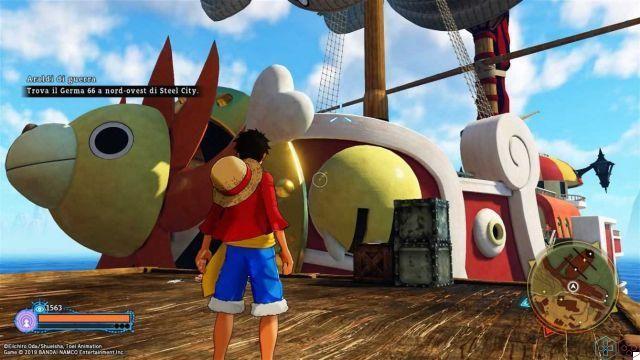 I environmental sounds turn out to be poorly cared for compared to the original ones, as regards instead combat ones are neat and faithful to those of the anime. Speaking of the commands the latter are simple to use even for those who are not experts in the genre. As for the imput sometimes they are not received by the game system, creating a mix-up that can lead to defeat especially with fast and / or powerful bosses.

To conclude, it can be said that Ganbarion centered the whole game on Straw Hat because of his abilities, but it would have been just as fun. play as his teammates. If that had been the case, the fight would surely have taken a different turn by rendering the most varied and fun adventure. It was a real shame that a series of slips compromised the final result. And what do you think of One Piece World Seeker?

We remind you that One Piece World Seeker is available for PlayStation 4 e Xbox One at the recommended price of 69,90 €, but also on Steam for the price of 49,99€. To not miss any news on the world of video games, continue to follow the pages of techigames.

Review One Punch Man: A Hero Nobody Knows ❯

add a comment of One Piece World Seeker review: a disappointment?