Review One Punch Man: A Hero Nobody Knows

One Punch Man: A Hero Nobody Knows is the protagonist of our review, which will clarify all the doubts you may still have: did the famous manga and anime make it to become a video game with all the trimmings?

Well, no. Simply not: it is useless to go around it: One Punch Man will also be one of the most well-known, famous and original manga and anime of recent years, but the video game based on the same, One Punch Man: A Hero Nobody Knowyes, he didn't convince us practically at all. And we've got to play with it for quite some time on Xbox One, before returning to you with ours review. So much to have finished it, and to have unlocked practically 98% of the Achievements present.

We will deal with the main aspects of the production in question in the article you already have in front of you, so a little more patience. But in the meantime we confirm a thought that may already have flashed in your mind in recent days: One Punch Man: A Hero Nobody Knows is a production perfectly suited to opera fans, and no one else. Better still: to the opera fans ready to postpone several obvious defects. 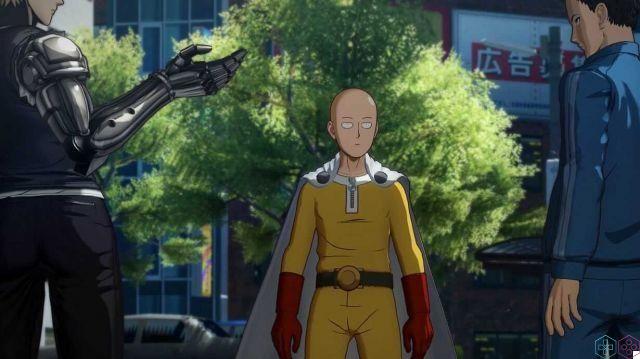 A hint of plot

One Punch Man: A Hero Nobody Knows follows faithfully, albeit in its own way, the plot of the starting manga and anime. So yes: you will meet again Saitama with all his friends, enemies and acquaintances; you will relive the most important battles of the opera, recently re-proposed also on the Netflix series; you will (partially) delve into the aspects behind some characters, such as Tornado of Terror and Storm. But in a particular way: first your avatar and game alter ego will be created, then… You will follow Saitama and you will get in his way if necessary.

So, forget about a video game in which you could play the Mantellato Pelato from the beginning: after all, what sense would it have to play with Saitama if he can knock anyone out simply with a punch? Much more sensibly, One Punch Man: A Hero Nobody Knows is content with tell a fictional story, parallel to that of the events of the manga / anime of One Punch Man.

Creating your own character is satisfying, with many traits, features and accessories taken from the TV series; more questionable is the fact that the hero protagonist is the classic mute already revised recently in Code Vein: everyone talks, acts, fights, asks, and he is silent now nodding his head, now shaking it.

To chronologically place the narration of the game, you just need to know that from the start of the story onwards you will reach the clash with Boros and his spaceship; all subsequent events, therefore, for the moment do not fall within the production of Bandai Namco. It is not clear whether or not they will come with a DLC, experience shows that the company usually prefers to aim directly with a second chapter (offered at full price). 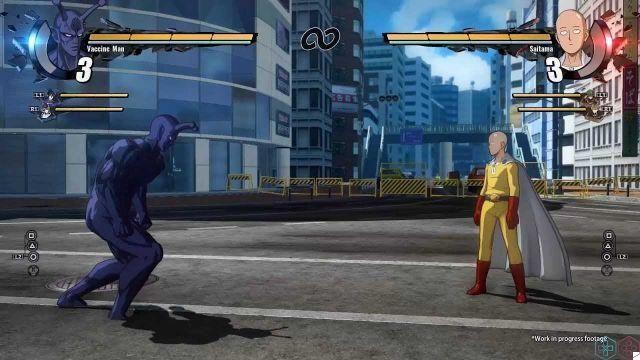 One Punch Man: A Hero Nobody Knows is basically a fighting simplified, beyond the few sessions that vaguely recall the RPG. Most of the missions, whether main or secondary, will require you to beat up or random creatures (mysterious beings) or the main antagonists and supporting actors of the anime. Between one mission and another and the various proposals of the gameplay, then there is the main narrative, which pushes the player to run from one side of the (small) game map to the other, reading messages on messages on messages received on their smartphone.

The fighting game of One Punch Man: A Hero Nobody Knows, however, is such only in name, resulting in fact extremely simplified: apart from the light and heavy attack, and the possibility of course to execute the parries, the player can perform up to three special shots assigned to simultaneously pressing an Xbox controller bumper button with a primary one.

The moves are not only very powerful, but also unbalanced: in this way One Punch Man: A Hero Nobody Knows encourages the use of certain characters over others, with a total and deleterious disproportion in the online sector of production, as you can imagine. If a hero is stronger, everyone uses that. And the variety is irreparably compromised.

A good smattering halfway between the RPG and theaction allows you to upgrade your hero by assigning points to certain stats once you level up. Nothing too complex, satisfying or profound: but it's a good start, and bodes well for other productions that Bandai Namco will manage in the future, even simply for the inevitable One Punch Man: A Hero Nobody Knows 2 in the coming years. 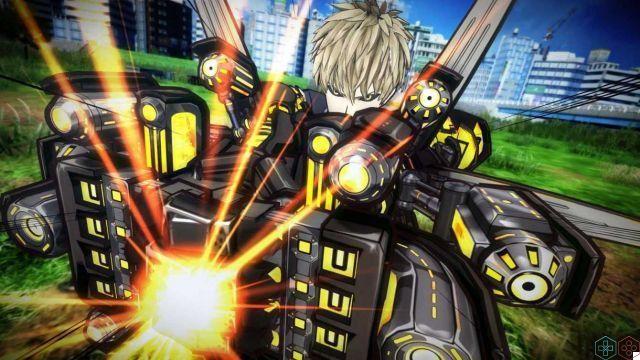 One Punch Man: A Hero Nobody Knows can be enjoyed in full offline, but if you want to go online you will find yourself struggling with a city full of players present in real time. There is no shortage of funny and bizarre situations, especially due to the different and original customizations of their game avatars. The protagonist can then "challenge" the other players present in the square, hoping that the latter accept; or add them to your friends list. Too bad that the online mode end up here, without group missions, raids or minigames of any kind; there is only the versus PVP mode.


Even stranger is the fact that you can't play the Bandai Namco title offline, or at least we couldn't find this game option. Patience, because it is likely that a Saitama VS Saitama fight would have simply bored us; there is no shortage of many things to do even alone, between main missions, secondary, the hero rank to carry from C to S, and much more (including Trophies and Achievements). 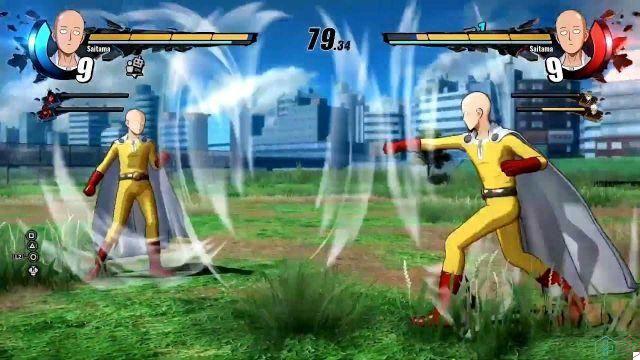 Unforgettable and drastically behind the times, the technical sector. We tried the title on the standard Xbox One, and the graphic detail is probably a little higher than what we could have evaluated on Xbox 360: renderings, polygonal models, asphyxiated game environments, unlikely collisions, do not give any credit to the work of departure. Everything improves a bit with the English and Japanese dubbing, and with the soundtrack: but nothing worth pulling your hair out for, or spending 60 euros for a game copy.

One Punch Man: A Hero Nobody Knows is the first video game dedicated to manga and anime known as One Punch Man, and sadly it's not that great at all. Some ideas behind the gameplay are interesting, but almost always realized superficially; just as superficial appears the mixture of various genres (RPG, action and fighting game above all), the technical sector and the management of online game modes. It will get better with the next date, perhaps; we certainly hope so. For Saitama, more than anything else.

add a comment of Review One Punch Man: A Hero Nobody Knows