Maize review: about corn on the cob, bears and stupidity

After a year, a game about sentient cobs, a Russian toy bear and a stupidity that knows no bounds arrives from the PC world. Let's see what Maize is like!

I have to make a confession. Although I often boast (to myself) that I am always informed about upcoming games, when I received the review code for maize (thanks Finish Line Games for giving it to us) I found myself quite bewildered. It was the first time I'd heard of him. I had no idea what it was.

Maize: two scientists and a cornfield

It all starts with a single idea: what if two scientists misread a US government request and create sentient corn on the cob? The answer is: so many absurd things.

Once the game has started, we wake up in a field without knowing anything about ourselves or what is going on. We will begin to explore the district which consists of a series of environments (such as a rural house or a barn) lost in a small maze of cobs.

The game is based on the structure of the classic Myst, or rather a first-person adventure, but very (very) simplified. Basically, we will have to look around, collect items and figure out where to use them. This will unlock new paths and allow us to continue. As we progress through the game we will discover what this cornfield actually is and the secrets it hides.

Maize: The cobs also have eyes and ears

Let's start by talking about the first element that catches the eye: the graphics. The game has been available on PC for almost a year and now arrives on Xbox One and PS4: we have reviewed this latest version. The game is clearly the work of a small team that did what it could, but it's just as clear how the conversion to console is on average insufficient.

On a technical level, the game offers a number of low resolution texture which are therefore washed out and pixelated. There screen polygon size is extremely low. Light effects are almost absent and, when present, make some objects much brighter than others for no reason whatsoever. Furthermore the game struggles to load textures and shadows: we will see them appear and disappear a few steps away from us as we move. Stylistically, the environments are mostly generic and are unlikely to intrigue us or lead us to speculate on what is happening.

The sound offers dubbing all in all good, but it is extremely lacking from the point of view of background music and environmental effects.

Also the menus are essential to say the least: a semi-transparent corn-colored vignette with writing stuck on top of the least worst. The tutorials and some comments that the game will make during the narrative phases appear to be only white writings in the center of the screen, sometimes not very visible due to the lack of a cartoon that acts as a contrast. All of this indicates that the team's work was superficial. 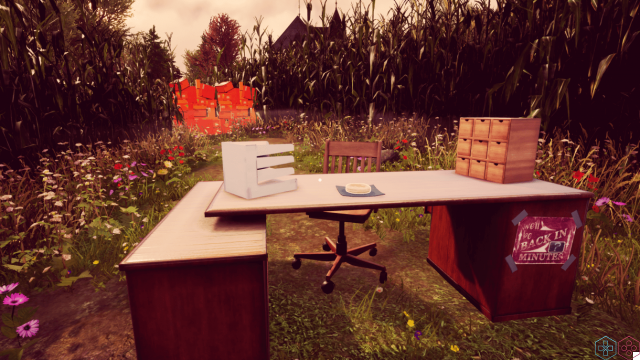 Maize: a place for each corn on the cob

Having overcome the bad technical and stylistic impact, let's try to understand what the game consists of. As I said, we will have to explore medium-sized environments, labyrinths of rooms and corridors, within which to recover a series of objects. Then, we'll have to figure out where to use them.

The whole thing, however, is quite trivial. Let's start by stating that many objects will have to be placed in a specific spot decided by the game. This is suggested by a transparent silhouette that clearly indicates which object to use. In addition, all objects will have a description, often witty, which suggests how to use them: however, these suggestions will often be direct indications.

Simplicity itself is not a bad thing: it is clearly a choice of the developers who wanted to keep a low level to make the work accessible to all players. Unfortunately, environmental puzzles (if we can define them that way) are average not very logical and disconnected from each other. We will not play by truly understanding what we are doing and why we are interacting with certain elements. The whole sequence of actions to be performed to continue will be automatic, due to the limited number of elements available. The only way to get stuck for a few minutes will be getting lost in the mazes (difficult) or not noticing an object in a room (already easier, but not too much). Everything will be obvious and direct. We will immediately find ourselves running around the rooms to find everything that is collectable and we will begin to place it where it is clear that it should be placed. We will be more porters than investigators.

Maize: a story of stupid corn on the cob

The very early stages of the game will leave us with a feeling of mystery and, if it were not mitigated by the bad graphics and bad sound, tension. After the first area, however, the game will open in all its stupid madness. In a good way, but especially in a negative way.

The game, in addition to proposing the elements to be used for environmental puzzles, is littered with purely narrative objects (75). You might think of things like audio notes or lyrics that deepen context and narration, but you'd be wrong. Most of these are literally random objects whose sole purpose is to make a little joke via their description. The problem is that the humor inherent in these collectibles is limited to two or three types of jokes, repeated over and over again ad nauseam. The few characters present in the game are therefore exaggeratedly limited and soon uninteresting.

After the first phase, we will get an adventure companion, a Russian robotic bear who believes that everything in the world (us first) is stupid and useless. And he's not wrong. This is the clear underlying idea of ​​the developers. A set of stupid ideas, piled on top of each other, which should bring out some smiles. It is undeniable that some may like this specific mix of madness, but the truth is that even from this point of view the work is very limited. The ideas are few and not very incisive. 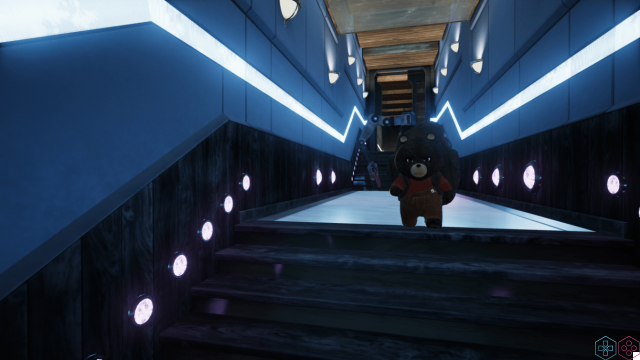 Maize: who should buy it?

Maize therefore turns out to be a very simple first-person puzzle adventure with a context and a narrative that tries to be crazy without being objectively quality. It is not possible to recommend the game to fans of Myst titles and, given the base price of € 19.99, I struggle to suggest it even to lovers of slightly crazy works. With a strong discount, the greatest non-sense enthusiasts could consider recovering it, perhaps to laugh at it with friends in a couple of evenings. It won't take you more than 4-5 hours to finish it, but the fastest will be able to do it in three or less without too much difficulty. The game also does not have Spanish subtitles but it is completely in English.

add a comment of Maize review: about corn on the cob, bears and stupidity