A few days ago it is possible to start your adventure in the world of Lego Worlds on PlayStation 4, Xbox One and PC. What's new? Let's find out together

Lego Worlds had struck us right away, since it was made available in early access on personal computers in the summer of 2015. The latest effort by Warner Bros, based on a brand apparently immortal in both the ideas and the fun it can offer to adults and children, he had tons of arrows in his bow and threatened to challenge the sandbox colossus par excellence: Minecraft. Two years have passed, and just a few days ago it is possible to start your own adventure in the world of Lego Worlds, this time definitively, come on PlayStation 4, Xbox One e PC. Were the promises kept? What's new? Let's find out together.

At least theoretically, Lego Worlds immediately showed a winning idea: the games of the historic brand have always proved capable of offering dozens of hours of fun, set in the more or less known universes of various film and comic series. Fun enough to justify even a recent re-edition of Lego Harry Potter, the most "dated" of the family.

But in recent years innovative attempts have not been missed, starting from Lego City Undercover on the now lamented Nintendo Wii U and passing through Lego Jurassic World, Lego Avengers and Lego Batman 3: Beyond Gotham. Of course, we were going to innovate on certain basic elements that never changed: the strong irony of the narrative direction, an extremely linear plot, a dozen or so levels linked together by main hubs that in the latest productions were getting bigger and bigger and detailed (thanks to the greater power available to PlayStation 4 and Xbox One).


What could be added to this format to make it more interesting and even attract what people who have always seen in Danish bricks nothing more than a product for children, underestimating its enormous potential? It could be added l’elemento open world, first and foremost, and Lego Worlds has it. But it still wasn't enough. In fact, Lego games have always presented themselves with that atmosphere of "I'll take it all and I'll break it all", but the real soul of constructions (that is, building) has always remained in the background, appearing in a few and limited situations. Lego Worlds is the first title in the ad series instead be focused primarily on building.

It is a full-fledged sandobox, clearly inspired by the now world-famous mechanics and experiences offered by Minecraft in all sauces and on all consoles. But, unlike the Mohjang title (later passed to Microsoft) which had to invent characters, situations and a whole world behind it, Lego Worlds already has all this, because it can draw on hundreds of different universes, which have inspired in the last 30 years the various Lego Sets appreciated by children (and adults) from all over the world. We will analyze later this extreme variety of production, which has convinced us in every aspect, especially in the less credible and therefore more fun ones. 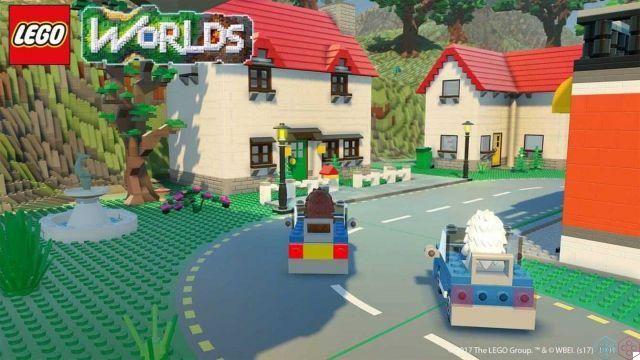 In the two years of its early access, Lego Worlds managed to entertain by leveraging "only" two elements: the variety of game worlds and the extreme customization of each mechanic present. Basically, we entered randomly generated worlds, which could therefore be of all kinds, and we began not only to destroy, but above all to build, at will. And in every detail: from the rock at the end of the road to the trees, to the same “clods” that form the surface of the ground, and so on until the courses of the rivers, the height and location of the mountains and all the rest are moved. Lego Worlds means precisely this: the worlds of lego. Worlds that can be completely modeled by the player, without any limits.


All the news of the console version

Or at least, there was no limit in the early access version. In the complete edition of the game, which you can also find on sale on the Xbox Store and PSN Store at 29.90 euros, the limits are there. To begin with, it is no longer possible to enter as you please in any world you want and whatever size it is. Now you have to pay a kind of game currency, the well-known Golden Bricks, to free access to increasingly larger worlds. In the absence of them, the character will remain confined to his ship in the first (small) universe available. A big bad deal for those who already played Lego Worlds on PC and had paid out the initial sum, which is now limited overnight to most of the modes and mechanics that he had learned to appreciate in two years of play.

But it doesn't stop there. In Lego Worlds, the one thing that was not really needed was introduced: a plot. Steps for Lego Avengers and Lego Batman, in which a minimal narrative event must justify the unconditional and ironic destruction of the bricks. But in an open-world sandbox focused on creativity, what need could possibly push developers to curb their imagination? By sacrificing it, among other things, not to a new, dutiful but at least necessary element, as to a completely accessory and out of place detail. It seems rather that at the last moment Warner Bros was afraid to scare the fans of the series by presenting them with something too innovative: taking a step back, it preferred to resort once again to the plot as the main element of the game from which everything must start.


A choice that seems plausible to us only thinking of the public of children, who would otherwise have found themselves in their hands a world of possibilities armed only with tutorials, and not with the narrative events by which they were guided in all the other games. But even so we have to turn up our noses.

The "plot" begins with our arrival on an unexplored planet, aboard an unlikely ship made of bricks. But then everything, every smallest and most insignificant element of the game, was made with bricks. From our landing in foreign territory they will leave a series of side quests (bring object X to dweller U, go from here to there, build this or disassemble that) which will allow us once completed to earn a certain amount of gold bricks. With these, we will unlock from the map of the universe access to worlds that are gradually bigger, more distant and interesting.

At the same time, we will also have access to new items along the way. Everything that we will see in Lego Worlds, in fact, from the plant to the snowy peak, will be available for purchase from the menu catalog, at the price of the classic "studs", or the small bricks obtained by the character from the destruction of the objects in the game scenario. Completing the catalog is a titanic undertaking, just consider that there are not hundreds, but thousands of selectable objects, coming from all known Lego series. There are even items created specifically for the video game. 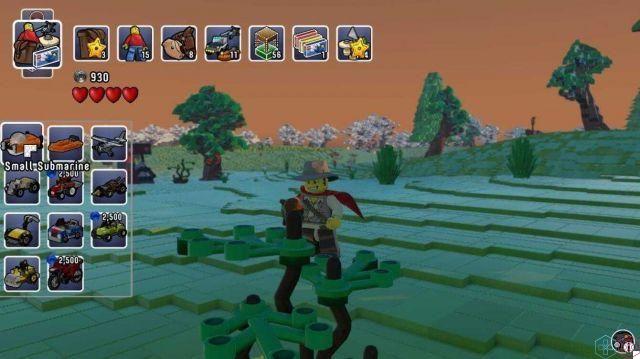 Aside from continuing into story mode, there are no goals of sorts for the player, if not to give free rein to their imagination. But even here, we must sadly point out how the environmental modification mechanics that were so intuitive and functional in the early access version have been revised by the developers, and replaced by completely new modes. Now, we don't feel like saying that the new mechanics don't work well or are less functional than the previous ones. For novices, indeed, they seem phenomenal to us. But what happens to the insiders?

The problem is that all these beautiful thoughts not only do not add anything new, limiting themselves to reorganizing what was already present in the trial version, but they rearrange it in a completely different way than what the loyal players are used to knowing. While before with a single tool it was possible to do everything, now every single action (creation, modeling, destruction, painting, ...) is entrusted to a specific object that will be mastered through the appropriate (and boring) tutorials.

From the point of view of variety and the audio-visual sector, however, Lego Worlds has been significantly improved, enhanced and perfected. There presence of more than 20 different biomes makes almost every game unique, and it is possible to literally get lost inside the worlds, observing exotic animals, constructions, buildings and scenarios that are as fun as they are well made. Certain animals can be taken from their habitat and used as a vehicle: for example an elephant in the savannah, or a horse in the forest. There is also no shortage of dragons, sea snakes and much more fascinating and dangerous creatures.

The update to the final version has also added many new audio tracks that adapt almost perfectly to the certain environments in which they are inserted, and the glance convinces both on PS4 and on Xbox One (the best performance, as always, remains a prerogative of the PC). In short, an adventure that is really worth living. And then, what if we told you that at any time you can invite an online friend to your world, or hand over the second controller to your brother and have him added to the current game? Would you still have some doubts about spending these 29.90 euros of brick-based fun? In our opinion, no.

Lithium Inmate 69 review, a mixture of horror and puzzle-game ❯

add a comment of Lego Worlds review: revolution or failure?