Gravel review: on the right path one step away from the finish line

After having published a new motorcycle title, the guys from Milestone launch themselves aboard off-road four-wheeled racing cars in the newly arrived Gravel. The proposed mix is ​​characterized by a lot of fun driving powerful vehicles in the most absurd and disparate locations. Find out if we liked it in this full review

Nothing innovative on the horizon but certainly a pleasant novelty in a videogame market that increasingly sees the driving simulator sector take on serious tones in search of absolute realism. Unfortunately, as they say in these cases, not all that glitters is gold, but let's go step by step.

Collecting podiums is the only thing that matters!

Starting the game we immediately jumped into the mode Off-Road Masters, Gravel's single player campaign. This mode is made up of various events (elimination races, sprint races over several laps, time attacks and some variations on the theme) alternating with real ones “boss fight” in which we are called to challenge industry champions in exciting 1v1 races. Obviously also present the classic modes: free race, time attack e multiplayer. Nothing that particularly enriches the title and, in the case of multiplayer, it didn't even give us a lap of the track against real challengers due to the total emptiness of the servers.

We promised you a great show and we at Gravel Channel always keep our promises. The formula is what we like: extreme cars, incredible locations and wild drivers. In one word: OFF-ROAD MASTERS.


The speaker of Gravel Channel introduces us with these words into what awaits us in the campaign mode. The immediate impact can be traced back to an atmosphere typical of automotive video games that gamers loved so much in the early 2000s, complete with a stunt counter. Mind you, this is just what we like about Gravel! In fact, for several years we felt the lack of a title of this type, which makes arcade nature its strong point, to which to approach without having to know in depth every mechanical component of cars. But Gravel isn't just arcade… unfortunately. 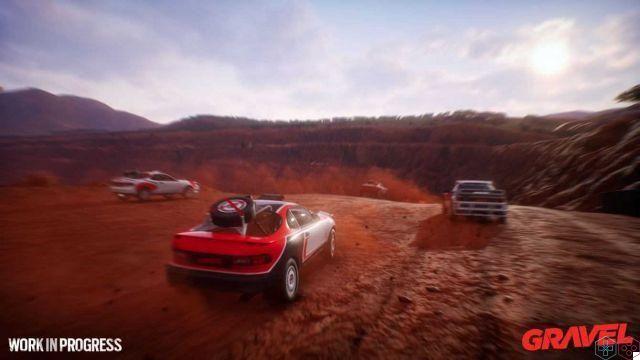 If only they had the courage to propose a totally arcade driving system ..

Perhaps it is precisely when Gravel tries to get closer to a minimum of realism by abandoning the arcade nature that has convinced us less. The driving feeling, in part, reminded us of some peculiarities already seen in other very famous series such as Need for Speed e GRID. Accelerations, car stability and road holding are definitely arcade but, when cornering, the vehicles take on a behavior that we did not like, typical of a realistic simulator. Entering a curve at too high a speed will force the car into an infinite and unmanageable drift during which the g-force will push us off the track without the possibility of correction. In our opinion it is not a winning combination, we would have preferred a more linear behavior of the vehicles throughout the track so as not to have to adapt our driving style according to the straight or the curve faced.

Otherwise, piloting one of these racing cars is a fun but incredibly shallow experience. While in WRC 7 we infinitely loved the difference in the response of the cars depending on the terrain, in Gravel we could not appreciate any of this. The differences in driveability of the cars is limited to the different tonnages of the same. Going from dirt to asphalt or sand in the various phases of a circuit has no impact on the gameplay and is therefore limited to being a simple visual variation. The physics engine behaves in a fluctuating way alternating precise collisions with others so exaggerated as to create daring and spectacular car flights. 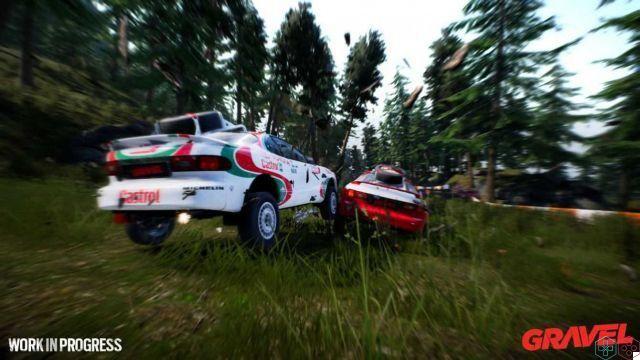 Adopt theUnreal Engine for their creations it was, for the Milestone boys, more than a whim, a real necessity. Having retired the proprietary graphics engine used to the bone, it was finally possible to take that step forward that allows the titles of the Milanese software house to compete with the latest releases in the videogame field. The overall visual impact is good and the polygons that make up the paths are well finished. Perhaps, in this case, what weighs more is a certain lack of inspiration that has made the circuits decidedly linear and with few real peculiarities worthy of note. Even the liveries of the cars (so many and of different genres) convinced us up to a certain point. It passes from the livery of the Subaru Impreza 555 masterfully crafted with attention to detail and an excellent response to reflexes in poorly finished liveries (mostly trucks) that camouflage a poor response to light reflections with a matte surface patina.


Unfortunately, the inexperience with the Unreal Engine is also noticeable in a framerate locked at 30fps on PS4 (which we used for the review) but which, during our test, proved to be very fluctuating and sometimes even reached much lower values ​​(for example on the circuit Stadium Los Angeles). Also present an annoying pop-up effect grass that would otherwise be varied and beautiful to look at.

On the other hand, the audio sampling is good of cars different from vehicle to vehicle and the background music is definitely appreciated in a style halfway between rock and metal that seems to want to accompany our competitions to the rhythm of drums. We would not have minded the chance to hear the commentator explode in wonder at the sight of some good jump, overtake or drift. Really a shame, a missed opportunity. 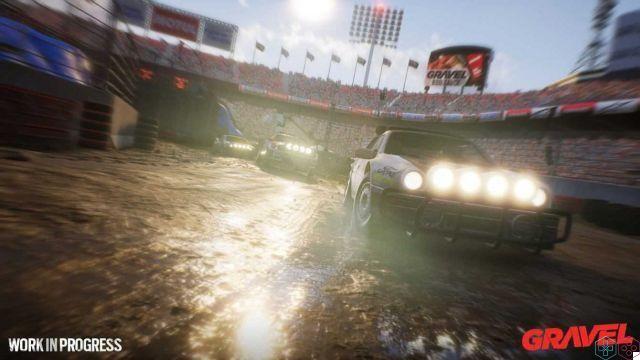 Gravel: an enjoyable atmosphere and a good level of challenge will keep you attached to the screen, too bad for those long uploads

The tracks present in Gravel are not many but alternate the most unlikely conditions: from the asphyxiating heat of the desert of Namibia to the icy and snowy roads ofAlaska, passing through huge stadiums filled with euphoric spectators. As already said, indeed, the circuits are not particularly inspired on an artistic / technical level and they find in their nocturnal version the best expression with beautiful reflections of light, especially on the surface of the water.

Already at a medium difficulty level the videogame offers a good level of challenge, becoming practically impossible to get on the podium at higher difficulties. In all this, unfortunately, we have suffered not a little from the loading times of the races that alternate between being acceptable in some tracks to exaggeratedly prolonged in others. 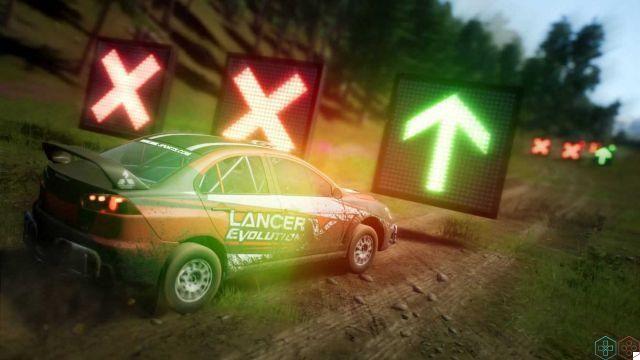 Gravel: on the right path one step away from the finish line

Putting the strengths and weaknesses of Gravel on the scales, we can do nothing but promote it, albeit not with full marks. Unfortunately there are several flaws that we would have preferred not to see but overall it is undeniable that it is a fun and well-structured title, as long as you don't have a too serious approach.

Gravel It is available for PlayStation 4, Xbox One e PC from 27 February starting from 49,99€.

add a comment of Gravel review: on the right path one step away from the finish line