Find out with our long-winded review if it's worth buying the Fairy Tail JRPG, tie-in developed by studio GUST of the iconic manga created by Hiro Mashima

One of the most successful shonen of the new millennium is without a shadow of a doubt Hiro Mashima's Fairy Tail. Although the author was not exactly able to create a memorable story and definable characters, the core of the love that every reader engages in following each chapter of Fairy Tail lies in the guild itself. In the concept of group, team, friendship and brotherhood. Every story has strengths and weaknesses and not all stories must necessarily be unassailable masterpieces. There are also characters, events that in their simplicity and predictability express love.

From the manga, whose publication began in 2006, an animated series was also taken, the cornerstone of the success of Fairy Tail. And now, from the collaboration between Kodansha and Koei Tecmo, the Fairy Tail JRPG was born by the GUST studio, the creators of the Atelier series. Indeed, the title based on Mashima's work has many elements and a basic spirit referable to the Atelier series, whose latest exponent is Atelier Ryza: Ever Darnkes and The Secret Hideout. Fairy Tail is already available on PlayStation 4, Nintendo Switch and PC and this is our review! 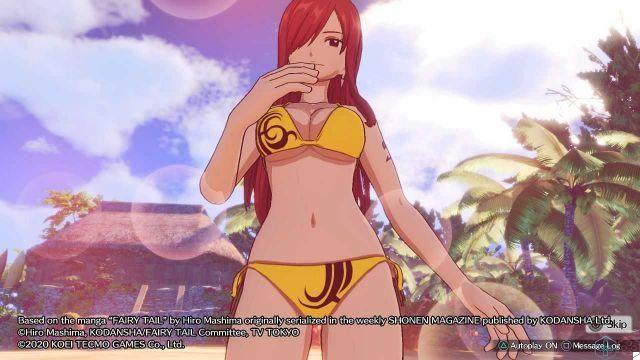 Normally, tie-in titles are video games created on a rather low budget and aimed at fans of the work they refer to. For this reason, usually, the stories examined are iconic: the incipits, for example, or, as in the case of a much more famous Dragon Ball Z, the most important arcs.. Fairy Tail is a work known in Spain, but not as much as the work of Toriyama, for example, or even a banal One Piece, which now has a very long series of dedicated titles between Musou, fighting and Action RPG.


So it would have been smart to start the Fairy Tail JRPG storyline from the beginning, from the establishment of the Guild and Team Natsu, but no. Koei Tecmo and GUST they decided to start the JRPG plot from an arc contained in volume 29 of the manga. A choice certainly dictated by the fact that the arches taken into consideration are two of the most eventful and certainly interesting, but which will discourage those who do not know the beginning of Mashima's work. This is because, despite the characters trying to give us clues about the past and the untold facts, unless you know the manga you will lose most of the references. 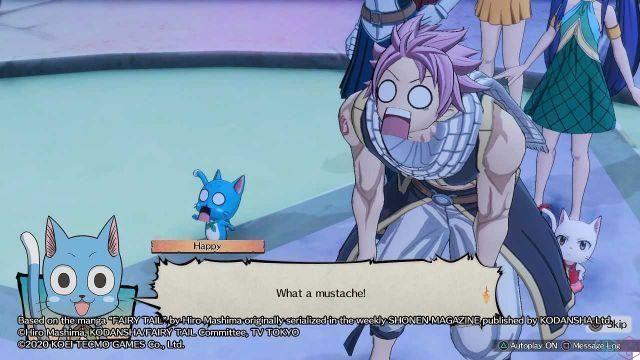 The story begins, however, on the island of Tenrou, where Team Natsu is soundly defeated by the invincible Acnologia dragon. Our heroes are saved by Fairy Tail's first Master, Mavis, but are transported seven years into the future. Back in Magnolia, therefore, the guild will now be on the verge of bankruptcy and it will be up to Natsu and his companions to restore it to its former glory.

And it's not really a way of saying, quite the contrary. One of the greatest objectives of the title will in fact be to raise Fairy Tail in the ranking of regular Guilds, carrying out increasingly important and high positions in the Ranking given both by the Council of Magic, the body that regulates the activity of all Guilds, either from the inhabitants of Magnolia or from the other cities we will visit. By completing these tasks, which we will be able to accept from the Guild Board, we will be able to climb the rankings and get Fairy Points, points that we can then spend to increase the Rank of each of the 16 playable characters. 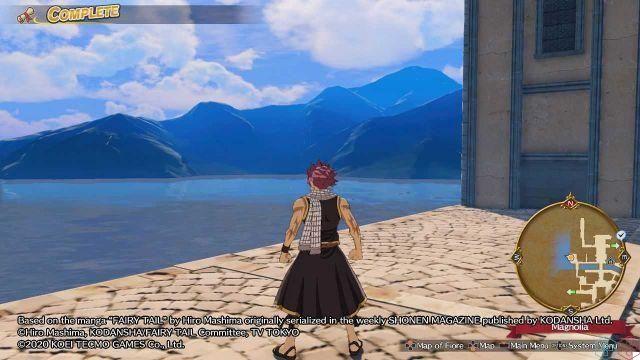 Side missions, side missions everywhere! - Fairy Tail review: the JRPG of the summer (maybe)!

Increasing the Rank of the characters means unlocking alternate costumes, new equipment slots for the Tear and much more. The biggest flaw of this infinite amount of secondary missions, in addition to a basic repetitiveness which, however, is to be considered almost normal, is the fact that, unlike the Ateliers, only a single mission can be accepted at a time. So get ready to go back and forth countless times. Many other types of secondary quests will then be available, from Duels, with which you can challenge your companions, to some miniquests that will allow you to increase your affinity with your allies.

Inside our base, in addition to the board for the sidequest, there will also be other structures, all of which can be improved and modified with special secondary missions. For example, Lisanna's shop will allow you to purchase a long list of healing items, while Levy's Lab will allow you to create Tear. Tears are special pieces of equipment that improve your characters' stats or give them special bonuses. Also within the Guild you can take advantage of the Kitchen, which will increase the maximum HP of all members as you improve it, or the Library, which will allow non-player characters to get more and more experience. 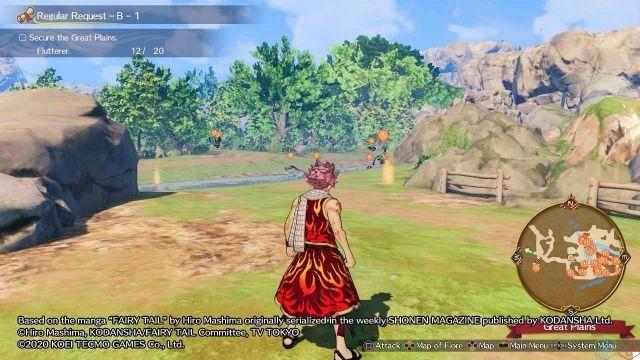 A Magical Show - Fairy Tail Review: The JRPG of the summer (maybe)!

The centerpiece of Fairy Tail is definitely its turn-based combat system. Many of the mechanics (and much of the style) of the battles were taken from the Atelier series. You can fight in a group ranging from 3 to 5 characters (based on the plot moment you are experiencing) and the enemies will be arranged on a chessboard consisting of 9 squares. Your characters will have a normal attack, not very powerful, but which consumes only one MP, and a long list of magical attacks that will gradually become more and more powerful as you accumulate experience.


Each magical attack is characterized by a power level and an area of ​​action. This last factor will be very important at a strategic level, because enemies will be placed randomly on the board and your attacks will be able to move them, if they do not decide to do it themselves. The first spells that will be made available to you may involve a maximum of three chess at a time, but as you progress you will unlock more and more powerful and lethal spells. And expensive. Our heroes will also have several Gauges on their side that they can fill. One is the Awakening gauge, which they will fill individually upon receiving attacks.

Once filled, it can be used to “Awaken them” and guarantee different effects depending on the character. The second, the Fairy bar, will fill up when attacking enemies. This, once full, will allow the team to unleash a series of sequential magical attacks that will end in a single powerful blow. 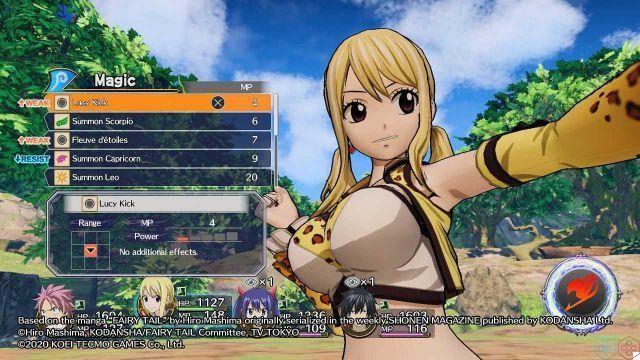 One of the peculiarities of the Fairy Tail combat system, in fact, is that the defeat will be dictated not only when all the members of your party have run out of HP at their disposal, but, following the spirit of the manga, the same will happen if the characters will finish MP. A rather rare eventuality, considering that the chances of returning to the Guild to rest and automatically recover them will be many and interspersed with the large amount of healing items that you can buy from Lisanna. But still an eventuality.

The main flaw that we could notice in Fairy Tail, in fact, is the very low level of difficulty both at Easy and Normal. The times that you will find yourself unable to continue with the plot battles will be very rare, especially if you are addicted to secondary quests, because you will always and constantly be of a much higher level. Only in Hard mode does the game pick up a bit of panache and allows you to better devise each fight, calculating the strengths and weaknesses of enemies and allies. 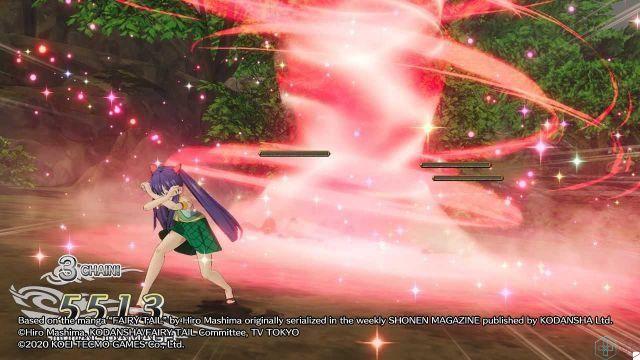 We assume that our Fairy Tail test took place on a PlayStation 4 Pro and that technically speaking the GUST studio has never shone. Only with Atelier Ryza the team was able to raise the bar a little bit in the technical sector, but it seems that with Fairy Tail they have had to take a step back (perhaps due to the limited budget?).

Although the character models are very beautiful and faithful to those designed by Mashima himself, and although the cel shaded scenes make their appearance, the textures of the game world (of ALL the game world) they are of a somewhat questionable quality. We also could notice several drops in Frame Rate in the most agitated situations on the world map, and, rarely, even during clashes.

The sound sector, on the other hand, is discreet with original Soundtracks that burst forth energy from all pores and that follow the rhythm of the narration and plot passages. The Japanese dubbing is excellent, faithful to the anime, a little less the English adaptation of the subtitles which on several occasions has changed the meaning of the sentences. There is no Spanish adaptation, but those who do not know much English should not be too discouraged: the sentences are never so complex as to require such a high level of knowledge of the language. 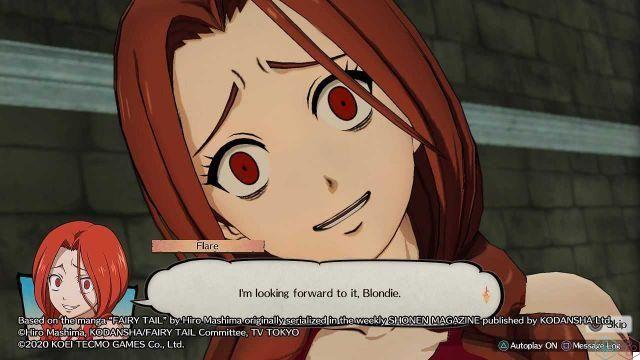 Ultimately, Fairy Tail could have been a great JRPG to spend the summer with. And perhaps, in reality, it is as well. If you can put aside a gtechnical mediocrity and a basic repetitiveness as for the secondary quests, you will find yourself immersed in the colorful world created by Hiro Mashima. A spectacle of magic and thrilling combat, especially when played on high difficulty, will captivate you in a whirlwind of missions, hunts and duels. Forza, Fairy Tail!

Guntastic Review: A puppet, a nudist and a worker enter a bar ❯

add a comment of Fairy Tail review: the JRPG of the summer (maybe)!