Guntastic Review: A puppet, a nudist and a worker enter a bar

In today's review we had the opportunity to try Guntastic on PC, an arcade game developed by an all-Spanish team

There was a "simpler" period, not too long ago, where games were almost solely an opportunity for fight against friends or the computer, in technical challenges to the highest score. Many of these do not even take place inside the house, but in front of the cabin cruisers lit up in sultry gaming rooms. Those of past generations will certainly remember the infinite money spent inserting coins to play one more game of Virtua Fighter or Metal Slug.

Over time this kind of experience has almost faded away, remaining in Spain only as museum pieces inside bars, or hidden around the corner of some super markets. Some modern games, however, take up the sensations, emulating the "one game and go" experience but without the fear of having to spend a mortgage on it. Guntastic it is among these, a simple but very technical game, which you can discover in our review by a worker.

It is a video game developed by Ludicrous Games, a team located in Lucca struggling with their first videogame project. Guntastic came out about a year ago on Steam in Early Access promising monthly updates and new content. To date, in fact, the community has seen the arrival of two new characters and several improvements to the game's accessibility. Far from being the many promised updates, but still welcome additions. However, will they be enough for its release? Let's find out together in this one Guntastic review on PC.

Guntastic is without a plot to tell or fascinating characters with a profound character. However you may fall in love with for some strange reason The Pupù, that is, a human caccona with long johns. Maybe it's more for you The Nudist or simply Joe l’Untone in case you want to satisfy some wild repressed desire. These were just three of the eight characters available, all very wacky and inspired by trash culture. Beyond this there aren't many other elements to describe the world in which the game takes place, were it not for a bizarre tendency to combine maps from historical to other futuristic environments.

It is a very minimal game, that just wants to attract for its simplicity. In front of the menu we are in fact faced with very few options, if not that of playing offline with friends, or online against the world. Both modes take place in the same way. As soon as you enter the game you will face up to three others human or computer controlled players. Everyone starts from a different corner of the screen and will try to pick up the closest weapon in order to quickly kill the largest number of opponents.

The most striking feature of Guntastic is the fact that I all die with a single blow, making departures really fast. At the end of a round, players are given as many points as the number of victims killed and, one round after another, when the maximum figure is reached, the final winner will be named. 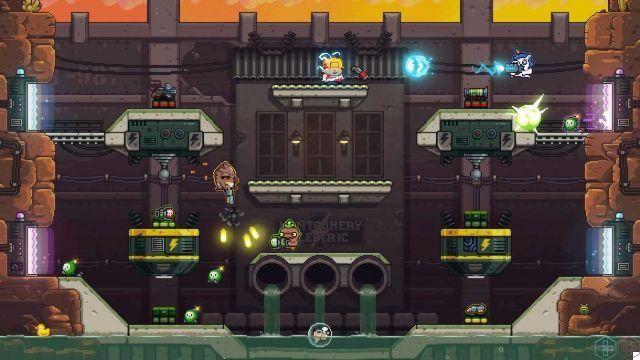 Weapons and maps, but without exaggerating - Guntastic Review

What the player can do is uniquely blow up, collect weapons or powerups and shoot. We would have liked some other gameplay elements, like a double jump or dodge, but the developers have deliberately focused the action on a few things. To win you will therefore have to master the weapons properly, coming to have to know well the timing of fire and trajectories. Fortunately, each offers a good variety and you will often find yourself having to use more or less all of them, as they appear randomly on the battlefield. None are particularly original but they work well and encourage a technical and calculating gameplay.

You will be able to collect a self-seeking rocket launcher, for an Shotgun, another charged with energy and many others. For example the drill shooter has bullets that pass through walls and the can launcher has bullets that bounce. The game maps will take you to five different environments (+1 coming soon), each with some small features. There will be lifts, teleports or passing train to dynamize the shootings to a minimum, but in general if you don't play too competitive, they could actually seem all the same to you. 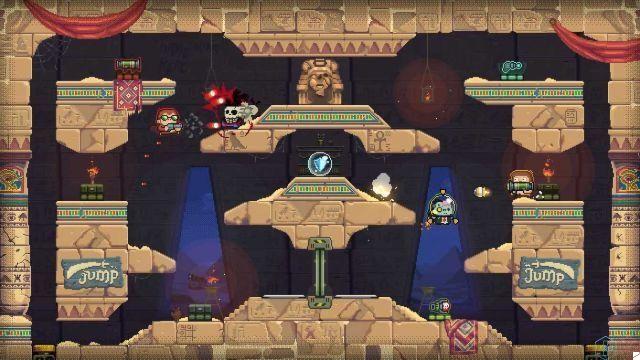 This is somewhat of the main problem with Guntastic, on the surface it looks like a very mundane game, which most likely already exists a clone on the app store sold for much less. If, on the other hand, you intend to approach this title thinking that you want to challenge friends as if it were your weekly appointment, we are pretty sure that you will find in this game several hours of fun at a reasonable price. It has little content to offer, but what little he does, he does well.

Guntastic, the video game in this review, developed by Ludicrous Games will be available from December 4th on PC and Xbox One. If you want to stay updated on video games and technology we advise you to continue following us on techigames.

6 does its job well

add a comment of Guntastic Review: A puppet, a nudist and a worker enter a bar