Elex review: a mix of medieval and science fiction

Elex is the new open world action rpg created by the creators of Ghotic: will it live up to its predecessors or not?

After the success they had enjoyed with the series Ghotic, a little less with that of Rysen, the Piranha Bytes are back. Fans are eager to get their hands on their new one action rpg open world. We played it and here's our review.

Elex: an alien world and its inhabitants

The game takes place on a planet called Megalan. One day, a comet crashed on its surface causing death and destruction. But he didn't just bring that. In fact, inside the comet, there was a material containing immense energy. This mineral was called Elex. The survivors of the disaster gathered in factions to try to gain control over the Elex.

The factions of Elex

The strongest faction of all is called White. They are human beings who take Elex, but manage to counteract the terrible addiction it causes. Thanks to this, the Albe have assumed an unparalleled strength and endurance, paying for the loss of emotions as a price. Another group that uses the Elex for personal purposes is that of Clerics. They do not take the mineral, but use immense energy to create weapons with a high destructive potential.

Those who use the mineral without any hesitation are the clan of gods Outlaw. Among the various factions, they are the most unpredictable ones. THE Berserker instead they are the ones who have repudiated any form of direct use of Ellex, except as a bargaining chip and a source of magic. Thanks to it they are able to fight on an equal footing with the other factions despite using only sidearms.

Finally, there is a very particular race of creatures. In fact they are the ones who have taken the Elx but have succumbed to addiction. This has brought about both physical and mental change, making them very dangerous and very unpredictable creatures. 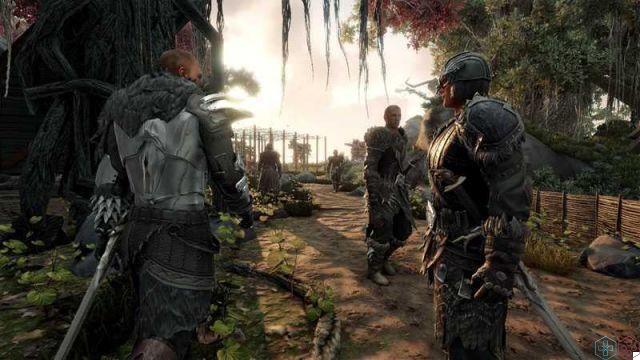 Our protagonist: a new beginning for Jax

Our protagonist, Jax, is a former Alba. During a mission, his vehicle is shot down and, according to the Albe code, Jax should have met the same fate. But something goes wrong and our Alba suddenly finds herself without technology and without the powers deriving from the Elex: at the same time she regains the ability to feel emotions. He so has a second chance to make up for it, choosing a new faction and a new lifestyle. And this is where our journey begins.

The plot is good enough, but never original. Let's expect a classic mix of intrigue, alliances and conspiracies. All this, however, drags on for more hours than one can bear: our interest in the narrative will not be the main reason why we decide to get to the end credits of the game.

Elex's graphics: between (few) highs and (many) lows

Elex is presented to us as a work with hand-drawn graphics. Despite the effort, the effect obtained is not the best. In fact, although the brilliance of the colors helps to make the environment more enjoyable, the graphics are poor in detail. Both in terms of texture and polygonal size, the game seems a generation behind. The only savable element is the lighting system.


The setting tries to earn some points thanks to the variety: in fact, we will find science fiction places in the style of Warhammer 40,000, post-apocalyptic locations like Fallout and also a medieval style environment. Depending on your tastes, you can appreciate the visual variety or consider Elex a schizophrenic and unoriginal attempt, by Piranha Bytes, aimed at attracting as many players as possible. Perhaps the truth lies somewhere in between: the glance is good, although the technical deficiencies try to ruin the overall experience.

The animations of the various characters are also poorly made. This heavily affects the combat phases, especially with the white weapon: the mix of attacks and dodges that is expected from a game of this type is heavy and difficult to manage. Even in the TPS sections the game does not give good feedback. In general, Elex is always a little awkward to play.

If the visual part leaves something to be desired, I liked the audio one. Sounds adapt well to their surroundings. The background music is spot on. Even the dubbing is not bad and we regret that the aforementioned poverty of animations also involves the facial expressions of the characters. The dialogue sections therefore have a good vocal strength but fail to engage the player due to technical shortcomings.

Piranha Bytes' work is structured according to the classic canons from open world action rpg. The game world is very extensive and also develops vertically: the protagonist will have a jet-pack at his disposal to be exploited on several occasions. It will be useful on an exploratory level but also as an evasion tool in case you find us surrounded by enemies (and it will happen often). Dodging, theoretically the main means of evasion, will never be a useful movement due to the slowness and large consumption of stamina. The latter will be consumed following each action, affecting our combat efficiency.

In general, we will find ourselves following the classic main and secondary storylines. The NPCs will entrust us with various missions that will lead us to explore the game world. Obtaining experience points will make us level up and we can therefore assign a point to one of the characteristics: strength, toughness, dexterity, intelligence, cunning. We can then place a skill point for enhance a talent among about seventy divided into six different categories.

The game system relies heavily on statistics, thus preferring the rpg component over the action one. It will be much more important to be of a high level, maximizing the gain of exp through the countless side missions, especially in the early stages. In fact, the game is moderately difficult: luckily the enemies do not scale with our level. For those who like to grind and enhance their character, Elex will be able to give many hours of play, but all the others will find a heavy flaw in this balance. 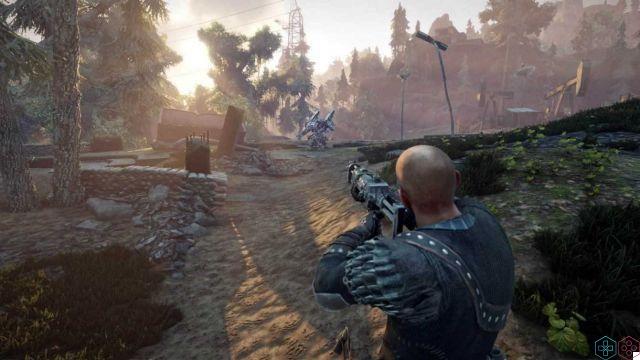 Elex is a work that divides. If on the one hand we have some good ideas and a discreet glance, together with an RPG setting that never gets old (unlike players who may not have all this desire to manage such a "heavy" game), from on the other hand we have technical flaws of various kinds and an originality that is practically not received. If you are not a fan of Piranha Bytes' works, the best advice we can give is to wait for a price drop. Although the work exceeds forty hours and allows a minimum replay value thanks to the choice of the tribe, the approximately 50 € requested by the SH is probably too much. The game is available in PC version (tested by us), Xbox One and PS4.

Thanks to THQ Nordic for granting us a review code.

Epic Tavern Review: What Do Heroes Do When Not In Dungeons? ❯

add a comment of Elex review: a mix of medieval and science fiction