Let's find out in this review Daymare: 1998, the first game developed by Invader Studios and released by Destructive Creations

He was recently finally released Daymare: 1998, the first video game produced by the guys from Invader Studios. Initially made up of a group of friends united by a passion for survival horror video games, the group boasts more than 10 professionals and some external collaborators. Among these are to be remembered Kazuhiro Aoyama, director of Resident Evil 3: Nemesis, e Satoshi Nakai, Chief Designer of the enemies throughout the Resident Evil series. Let's start this review now on Daymare: 1998 and find out how the PC game fared.

The game looks like a third-person survival horror, with survival hardcore mechanics and extremely difficult enemies to kill. It all begins in a secret center where they are trying to produce a lethal chemical weapon. A handful of special agents was selected to investigate an incident that immediately resulted more than just a security breach. However, the story, experienced from three different points of view, turns out to be even more obscure than it seems.

In the game we will find ourselves taking on the role of an elite soldier, a helicopter pilot and a forest ranger who will find himself involved in this particular situation. The town where the game is set will suddenly be plunged into utter chaos. Ordinary citizens will be transformed into monsters eager for blood and it will be up to us to find out what actually happened.

As we mentioned earlier, the game is a third-person survival horror. Strongly inspired by the Resident Evil saga, in addition to very familiar mechanics, inside we will also find monsters that are very difficult to kill. These survival mechanics, taken to the extreme in some circumstances, will risk compromising our adventure. It will therefore take one good dose of intuition and a good strategy to get to the end of the story, even by selecting the simplest level.


The game is structured in various chapters, each of which developed on several levels characterized by a particular map. The central point that will unite the three characters is a particular object (a special forces bracelet) that acts as inventory, biometric scanner, map and binder for collectibles. With this particular bracelet we will have everything "at hand". It therefore seems to me that the time has come to see in more detail, in this review on Daymare: 1998, this multifunctional object.

Let's take a closer look at the bracelet

Let's start with the inventory screen right away. Our character will be granted 3 weapon slots (a simple pistol, a rifle and a particular weapon that varies according to the character). In addition to these will be present another 12 for the various objects that we will find as we explore. An important and “space-saving” function is the one that will allow us to combine multiple objects with each other. It will therefore be possible to combine bullets for the pistol with the respective magazines, but also objects that will allow us to heal ourselves e get a small shield. Even the latter can be combined with each other to obtain better care. 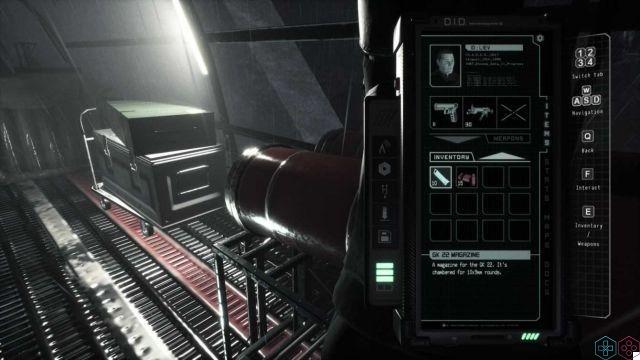 The second screen of the bracelet is the biometric scanner, which will allow us to monitor our health. However, even without checking from this special section, an acoustic signal will warn us if our vitality reaches a critical level, thus allowing us to heal quickly. In the third screen we will find the map, useful for understanding how the environment around us is structured. However, it seems only right to report in this review on Daymare: 1998, a small important factor that to many could be mangy. Our position will be indicated on the map, but there will be no indicator for the mission. You will therefore have to pay close attention to the dialogues and remember every single place you have already visited.

The last section is probably one of the most useful of all. Inside you will find all the documents found along your route, the audio cassettes and the chips to be exchanged at the appropriate terminal. This section will be helpful if you are looking for a code to open some locks without having to pin everything down.

Hack and solve puzzles to progress

Another important point in this Daymare: 1998 review is the constant presence of puzzles scattered far and wide throughout the adventure. As if a fairly complex survival mechanic weren't enough that will make our life difficult both with bullets (but above all with the various treatments), to progress we will also need a good dose of intuition. In fact, the puzzles will not all be easy to understand. 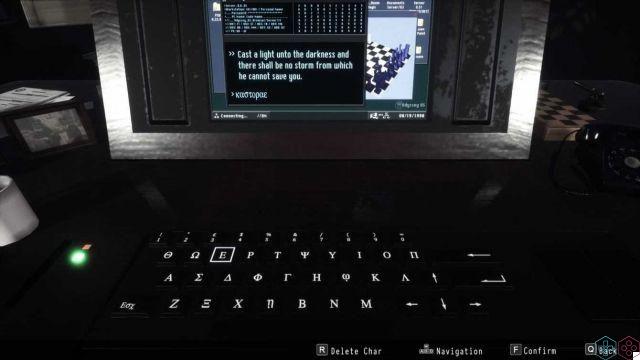 Although some may be trivial and can be solved in seconds, for others instead we will have to really do our best. Collecting the files will not be our only salvation. Logic will be the master and in some cases it will take a lot to progress. You will find all kinds of puzzles within the game, from simple puzzles to somewhat difficult to encrypt codes. A tip: equip yourself with a translator!

In addition to this we add a special function that will allow you to access in some rooms where we will find some useful objects to survive. I am talking, precisely, of the phase hackers. This particular minigame will see us busy with electronic locks to be tampered with. All we need is a cable (you'll find plenty of them scattered across the map) and good timing.


Save points and hidden chambers

Some chapters will be quite long and, since there is no automatic saving except at the beginning of the map, they may cause problems if you have little time to devote to the game. To accommodate this, the developers have thought of gods save points and now we will talk about them more in depth in this review on Daymare: 1998. Finding them will not be easy, as sometimes they will be in secret chambers not really easy to find if you don't pay proper attention. In fact, the latter can only be identified by listening to the acoustic signal that indicates proximity to the secret door. 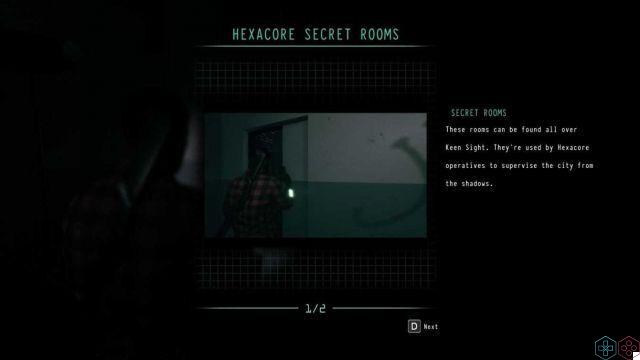 The terminal to save the game shows up also divided into 4 screens. The first is the deposit, where we can deposit excess items to avoid throwing them away. That way we can find them later in history if we need them. The second is the screenshot dedicated to bartering. By providing the terminal with certain items, we will be able to obtain other better ones, even if often the exchange will not seem favorable to us.

The third screen is for swap the various microchips that we will recover from some corpses scattered in the various maps. By leaving them at the terminal we will be able to get new items in exchange. The last screen instead is that dedicated to rescue. Here there will be 4 slots useful for creating multiple saves that will allow us to go back and repeat a stretch of history by facing it in a different way. This option will be useful if you get to a spot where you are without ammo or healing.

It is important to dedicate a separate chapter in this review on Daymare: 1998, al technical sector of the game. Although we see the lack of funds able to support the entire project by giving away one of those graphics we are all used to by now, it is it is this lack that makes the game beautiful in itself. The work done by the team with its own means is certainly excellent. As mentioned, the graphics are not that of a Red Dead Redemption 2 or of an God of War. 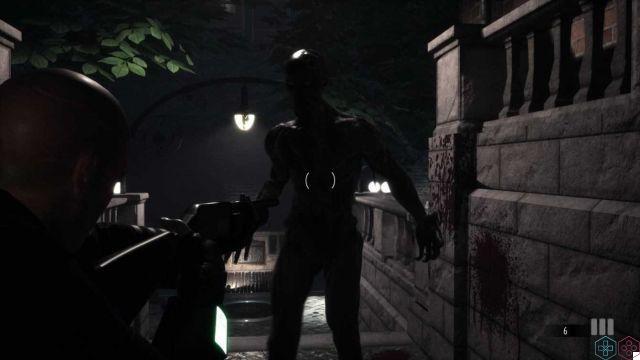 However, the skilful hand of Satoshi Nakai was able to contribute to the development of the models, giving a certain "vitality”To the various undead. The environments are well cared for, with that gloomy and grim look one would expect from a survival horror. This tension in the image aggregates to a sound sector very well done, able to provide the right amount of suspense in every moment of our adventure. Although it is so neat, in some moments you will be able to hear background sounds that don't quite match the current context.

As for the commands, they they are well distributed on the keyboard. Our hand will limit itself to moving on the usual WASDs and in rare cases it will move to keys that are still close enough. The only small inconvenience we will find it in a minimo input lag. We will be able to get used to this in the course of history, but it will certainly put us in no small difficulty at the beginning by making us waste valuable ammunition looking for some headshot.

We have now reached the end of this review on Daymare: 1998 and it is therefore time to draw some conclusions. The game looks like a good heir of the Resident Evil saga, although the quality of the technical sector is not up to Resident Evil 2 Remake for obvious reasons. The guys at Invader Studios did a good job of making this title on their own terms alone. Beautiful settings and a bleak climate will allow you to dive deeper into the game. 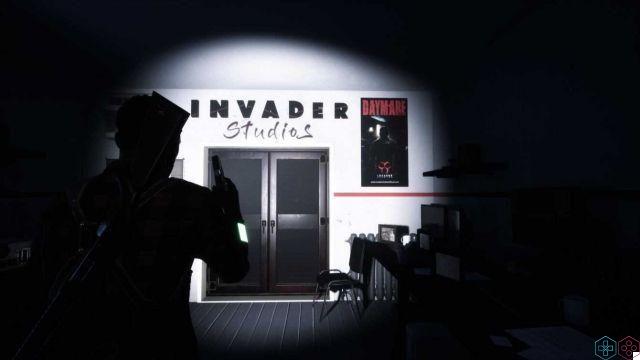 The survival component is also good, which will put us to the test. Finding bullets and cures will not always be easy and we will have to learn to manage everything as best we can. We will have to work our brains both to find a tactic to take down the enemies, and to solve the various puzzles that will arise. There will be some visual bugs and glitches though they will absolutely not compromise our adventure.

That's all for this Daymare: 1998 review. We remind you that the title is available for 4 PlayStation, Xbox One and PC (via Steam) digital edition only. To not miss further news and guides on the video game created by Invader Studios, continue to follow the pages of techigames!

7.5 For lovers of the genre and more

add a comment of Daymare Review: 1998, a worthy heir to Resident Evil 2?