Days Gone is the latest PlayStation exclusive released on the market on April 26th. How did the title behave in our hands? Let's start this Days Gone review and find out together!

The production of Days Gone officially started in January 2015 and it took a full four years to produce this new PlayStation 4 exclusive. After an exit postponed at the behest of the developers to allow for further improvement of the game, on April 26 it officially entered the world video game market. How did this title behave? We just have to start with the review and find out together!

In the game we will take on the role of Deacon St. John, member of Mongrels, a group of bikers living in Oregon. After losing almost all of his friends and his wife Sarah, Deek (his diminutive) and his "brother" Boozer they begin to live for the day, becoming gods strays in the Nightmare. Here we will live intense adventures, full of twists. The characters and the stories that intertwine will make the experience very intense, making us hate some, while we will end up loving others.

Events unfold about 2 years later the scene from the opening video in which poor Deek is forced to abandon his injured wife in a helicopter. The feelings that the protagonist feels will make their way from the pad that we hold in our hand until they reach inside us, giving us the same emotions that the Farewell motorcyclist will experience. The bond that will be created in the course of the game will intensify more and more, up to make us almost one person.

Days Gone is a open world post apocalittico, with a strong inflection of the mechanics survival horror. In the Nightmare, the region in which our adventures will take place, we will be forced to defend ourselves from brigands, furious (the infected) e repulsive. The main mechanic (and the one that will allow us to survive) is certainly that of research of materials. It will indeed be possible build melee weapons, dressing bandages and throwing items such as Molotov cocktails, grenades or even traps to deceive opponents.

Always having a good storage of objects will therefore allow us to vary with our tactics, granting us more solutions in some missions that would otherwise be truly impossible. In the Nightmare, however, we will not be alone. They are indeed present various fields, each headed by a different person, in which it will be possible refuel e repair the motorcycle paying with credits. Here it will also be possible modify your motorcycle, buy new weapons, stock up on ammunition, collect bounties e deliver food in exchange for some credit and some trust. 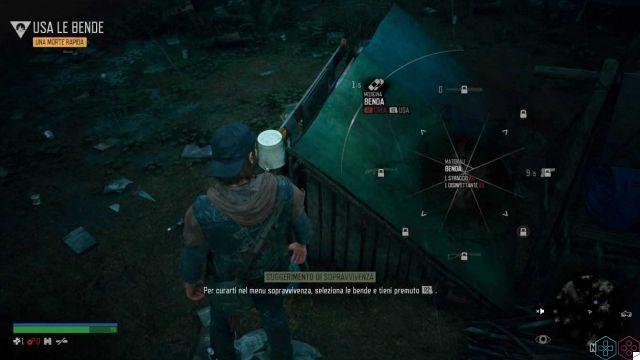 The confidence of the various fields will depend on various factors. They can accomplish missions as bounty hunters for the same, or refer some survivors to us that we will have previously saved. The higher it is, the more things we will be able to buy from the various retailers, guaranteeing us a respectable equipment. Besides having good weapons and an efficient bike, a lot skills will be useful our Deek is equipped with.

The evolution of the characters is a fundamental point of Days Gone that it seems right to report in this review. Thanks to three skill trees (one related to close combat, one for ranged weapons and one for the "survival" features) we will be able to improve our motorcyclist, guaranteeing us some small advantages that will be useful in many situations and that will greatly simplify the rest of our trip.

Although over time Deek will get stronger, the same will happen to our enemies. Repugnant, marauders and other factions will be equipped with armored characters, difficult to break down and which will cause very high damage. The furious instead they will evolve thanks to changes in their DNA which will allow them to become extremely strong and resistant or agile and fast. Some will be able to call in furious new ones, making the task more difficult than expected.

To all this are added the order, real expanses of wanderers usually gathered in mass graves, their ideal place to feed and live in community. Tackling one will not be a walk in the park and it will prove to be more difficult than one might think. Without good equipment we will be forced to flee. In the end, animals will also be subject to mutations because of the furious. We will find wolves, ravens and bears that, thanks to this mutation, will be more aggressive, resistant and faster than usual. In short, it will not be easy to survive even in the final phase of the game.

Days Gone: a technical sector with some flaws | Review

That l’Unreal Engine 4 it was a very respectable graphics engine we had already seen it on other occasions, such as in the review of Ace Combat 7 or in that of Tropico 6. The graphic power that it manages to give to Days Gone is something that borders on perfection, managing to give us moments of complete amazement in front of scenarios like those represented in the game. The reality it gives to faces and panoramas is truly elevated, immersing us even more in that post apocalyptic world that Oregon has become.

even the audio sector is well cared for, with a really full-bodied and adequate soundtrack. Ambient sounds, those of motorcycles and music come together in a unique way, giving us moments of almost peace in that so desolate scenario, being quite distinct from each other. The only negative note comes from the volume of Deek's voice when he speaks on the radio which (at times) turns out to be exaggeratedly high compared to the others. THE commands are easy to understand, even for those like me who are not used to having a pad in their hands.

Although for now the situation is therefore very positive, the real problem is the fluidity of the game. On PlayStation 4 Slim in fact, in addition to loads that can be exhausting, they are often noticed frame drops not indifferent and a couple of times I also encountered some small freeze. It also happened to me that sometimes a part of the map did not load and often the minimap was blurry and impossible to decipher. Obviously all these small inconveniences risk seriously undermining our gaming experience. 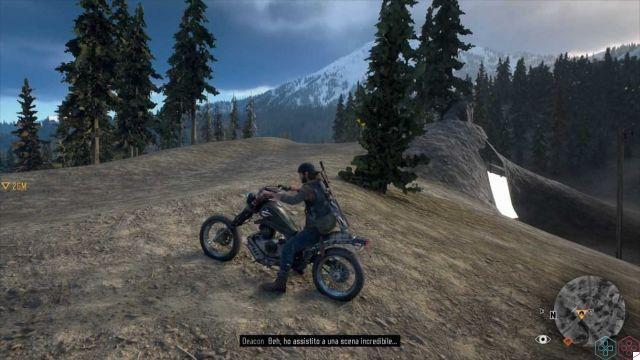 We are now nearing the end of this Days Gone review and it is time to take stock. The game looks like an open world than on the PlayStation 4 Slim it does not turn exactly as it should, giving us (so to speak) frame drops, mini freezes and some incomplete texture loading. However, despite these small problems, the gaming experience turns out to be very immersive, thanks above all to a truly monstrous graphics and audio sector.

Of considerable importance is the history, studded with many small stories that intertwine with each other, giving us an exciting adventure. At the end of the game we will be so attached to the characters that we will be able to experience everyone's emotions, especially those of Deacon. Artificial intelligence is not well programmed either. Despite this, however, you can still enjoy an excellent experience.

That's all for this Days Gone review. We remind you that the game developed by SIE Bend Studio and distributed by Sony Interactive Entertainment is available as exclusive PlayStation 4 at the recommended price of € 69,99. In order not to miss future news regarding the videogame world and beyond, keep following the pages of techigames!