Born from the unfortunate ashes of a more than forgettable first chapter, AeternoBlade II tries to revive the fortunes of the series, find out if it succeeded with our review

The sins of the fathers must not fall on the children. In short, what has been has been and we must not be influenced in the present. Although it is very true in real life, this often does not happen in the videogame world. Although everyone is given a chance to redeem themselves, when your father is AeternoBlade, released in 2014 and completely destroyed by critics and gamers, your hopes of survival are indeed slim.

However, we do not want to start with hasty and superficial prejudices. We are here today to bring you our AeternoBlade II review, developed by Corecell and released on 11 October on PlayStation 4, Xbox One, PC and Nintendo Switch.

Let's start with a bit of the history of the title, and by "history" we mean that of its development. AeternoBlade II was originally supposed to be released on Nintendo 3DS and PlayStation Vita way back in 2016, and in 2017 on home consoles. Various problems, especially when creating art design and character design, forced the team to open a crowd funding campaign to support the huge costs of re-hiring new staff, and then get back to work. Do you understand the trend?

The events that are narrated take hold immediately after the end of the first chapter. If you are wondering, no, absolutely nothing will be explained to you and you will immediately be thrown into the mix of facts and things that you absolutely will not understand if you have not played AeternoBlade. Generally speaking, Freyja, the protagonist of the first chapter, finds herself having to face a new adventure after a new destabilization has hit her dimension. On the other side of the world, two knights, Bernard and Felix, will try to save the world from destruction. 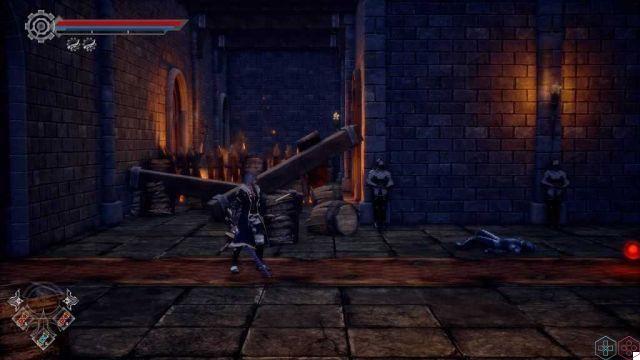 Prince of Persia is it you? Fortunately no! - AeternoBlade II review

The playable characters will therefore be three and all three, in the very first hours of the game, will come into possession of the AeternoBlade, a special weapon that will grant them the power of manipulating time, in different ways. Felix will be able to create, through his actions, a clone that will copy them over time, thus being able to inflict double damage or pull levers to open doors and solve puzzles.

Bernard, for his part, can simply block the flow of time for everyone but himself. A delight for boss defeat. Freyja, on the other hand, in addition to her basic power that allows her to create seals that she can fix and to which she can teleport, with the blade she will gain the power to rewind time, in two different forms: for other animated and non-animated objects. not for itself, or for both at the same time. Confusing? Yes, a bit like all AeternoBlade II.

The exploration of the various game maps can also be considered fun, having to put into practice the various powers that the three protagonists will have at their disposal. It will be important to manage our mana resource well, if we do not want or have to wait a long time for it to regenerate sufficiently or, more simply, to recharge the area. The puzzles will never be really challenging, however, AeternoBlade II's attempt to get closer to what the great Prince of Persia was at the time turns out to be, in the end, rather disappointing. 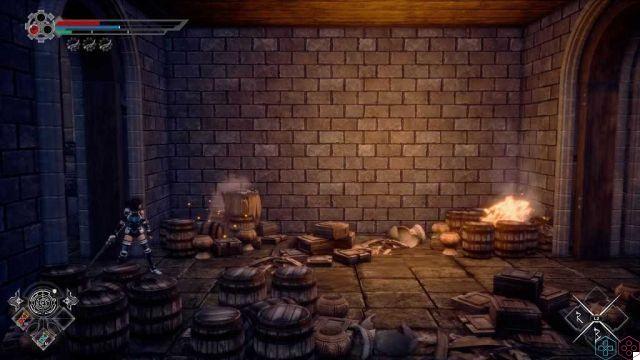 They come out of the fucking walls! - AeternoBlade II review

Rather disappointing is everything else too, unfortunately. If we can overlook the quality of the animations, which seem to have remained a distant 2009, and the aesthetics of the menus, which unite AeternoBlade II to a game of the PSP era, we cannot turn a blind eye, in the review, to the general quality of the gameplay in the combat phases.

From the first fights you will immediately notice that the difficulty is set upwards, but for the most wrong reasons. Hitboxes are inaccurate, and to call them such is to pay them a great compliment. We have often found ourselves dying from an enemy attacking us over and over from a point well away from its maximum range. In all of this, dodging is purely useless, especially the perfect one, since it is relegated to a measly fraction of a second. Considering that we will not be able to dodge in a row as many times as we want, having a limited amount of Blink available, and considering that the enemies do not give particular sound inputs and do not have such neat animations, you will understand well that the deaths will fall from above, especially in the first hours of the game. 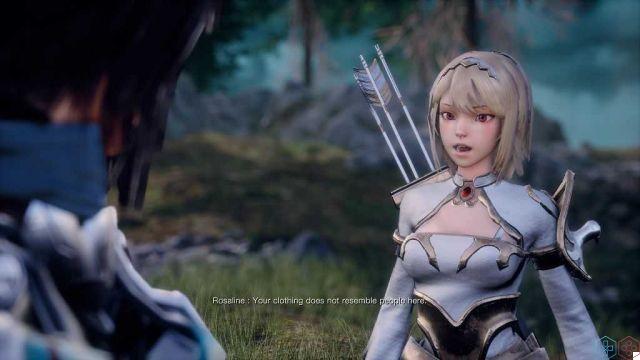 As long as we stick to 2D combat though, AeternoBlade II is still still playable. The real problem arises when everything goes through the various stages in 3D. Do not ask us why the developers have ventured such an addition, perhaps they did not realize how difficult it was to plan fights with the white weapon in three dimensions, but yes, there are and they are not sporadic. To the various problems that we have illustrated before, we add that of the camera, which even in 2D is annoying at times, but never at these levels. Unmanageable and intolerable, those suffering from motion sickness could also be bothered by it.

You will understand well then that leveling the characters, their moves and relics (the equipment of the game), it is more a question of survival than of satisfaction. Increasing the life points and the damage inflicted by our protagonist in use will simply allow you to survive longer and longer, hoping to get to the next checkpoint without throwing up.

I also deserve a small paragraph boss: certainly quite varied in terms of aesthetics, not so much for mechanics, they definitely have too much life given the general rigidity of AeternoBlade II. We also encountered some geodata problems, such as small rocks that prevented us from hitting the giant bosses at the least opportune moments. No drop in frame rates, though, and God forbid. 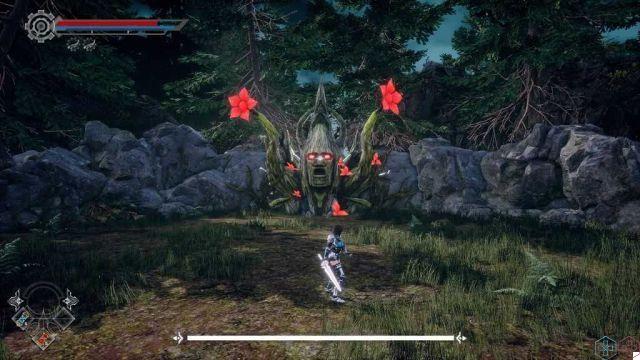 Aesthetically speaking, the styling of AeternoBlade II is nothing exceptional, but neither is it evil. The backgrounds, above all, despite being rather bare and repetitive, give a certain suggestiveness and underline the general feeling of the title. Too bad for the character models, which like the animations have remained in 2009, especially horrible in the cutscenes.

In 2009, the dubbing also remained, which however, we must say, we enjoyed a lot in the various hours of gameplay that saw us engaged in AeternoBlade II, so much so that initially we hoped to be able to write a review along the lines of “So Bad it’s so Good”, classifying the title as the classic Serie B game that entertains without commitment and without budget. If, however, we consider that at the time of writing this review, AeternoBlade II costs a good 35 € on all digital stores, you will understand why we advise you to take your money and buy Blasphemous.

AeternoBlade II attempted to be an experiment that combines a plethora of elements to create a Prince of Persia in 2019. The tragic flaws of the camera, the technical quality that remained more than 10 years ago and the general embarrassment that permeated our hours game, they will make you understand that the manipulation of time is not exactly the strong point of Corecell.