WRC 7 review: when the rally becomes a hybrid

The rally cars are back once again this year under the guise created for the third consecutive year by the software house Kylotonn. The result? WRC 7 is a hybrid with several flaws and some merits worthy of praise

The automotive simulation videogame sector represents a substantial percentage within the videogame market, boasting numerous enthusiasts and amateurs. Over the years there has been a marked evolution of the genre with some titles that have increasingly pointed towards realism and others who have opted for an approach arcade indulging, in both cases, the wishes of the gamers.

The series Dirt, within the rally genre, certainly represents the reference point for every gamer fond of this sport (as I write these lines I find myself in a nostalgic attitude with my copy of Colin McRae Rally per Ps1 in hands).

Unfortunately in recent years WRC it was not up to the direct competitor, albeit offering, from time to time, a valid product. Surely with this WRC 7 the step forward was evident, but let's find out together why I called it a hybrid.

WRC 7: the right combination of simulation and arcade

At the first start of the videogame we are asked if we prefer a more simulation approach or an arcade one. Personally, I had no doubts in choosing the simulation mode, because it represents exactly what I would expect from a rally video game. I state that the test of the game took place by testing it for really many hours, alternating a guide between pad and steering wheel.

The driving model that presents itself in our hands, in reality, it is not as simulation as one would expect from a choice of this type. As per WRC tradition, it represents a union, in my opinion very valid, between extreme simulation and the arcade, allowing steering and counter-steering to the limit but which can be controlled effortlessly. On a personal level I like this choice because, if on the one hand it is true that the soul of rally lies precisely in controlling these increasingly powerful cars between tiny streets on the most unlikely terrain, on the other it is important to remember that it is a videogame and , by nature, it must be fun.


Obviously a deeper feeling of realism is offered by the use of a steering wheel while, through the pad, we will have a feeling of greater stability and control. In any case, by adjusting the difficulty, the various aids will be activated / deactivated but the learning curve is not particularly steep, allowing you to safely master the car after a couple of hours. 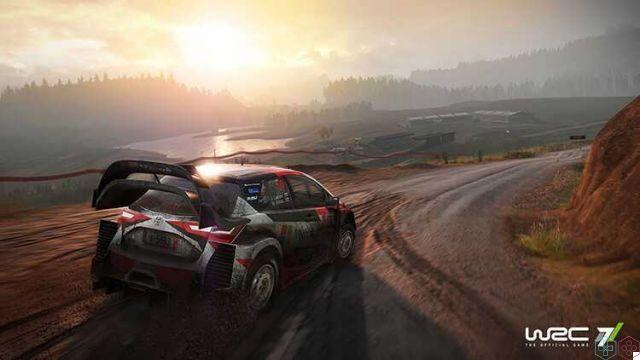 WRC 7: a level of driveability, but the catch is just around the next corner

The thing that struck us most and for which we feel like congratulating the WRC engineers is represented by response of cars to different terrains. We can assure you that it will whiz on asphalt, gravel or snow it will significantly modify the response of the vehicles and, consequently, will force you to change your approach to the game even within the same stage. For example, on the asphalt we will find ourselves having to take full advantage of the amplitude of the curves to steer better, on gravel and dirt it will be the counter-steering and the drifting to be the masters, while on the snow we will have to be particularly cautious due to the slipping of the wheels.

Another striking and well-made detail is represented by the micro-ducts present in the corners which, if not approached with caution, will force the car to lose grip, causing an inexorable skidding.

Let us now turn to sore point of the physics engine of WRC 7. The impact physics it is the most fluctuating sector of the whole product. This problem would acquire a lesser importance if it were really cars, it would be enough to never collide to solve it! Unfortunately this is not the case because it affects both the cars and the elements present on the track. In fact, it has often happened to collide with small bushes on the side of the road and see them crumble under our eyes (with a really low-level animation) and other times the collision with the same bush, placed further outside the track, has completely lost control of the car.


Furthermore, colliding with a wall, a tree or other static elements will make vehicles fly away in a way that is not always realistic and faithful to reality. All this is certainly a consequence of the fact that no painstaking work has been done in refining the physics engine which, although it returns a sensation of well-managed speed, has these flaws that very often make you turn up your nose.

WRC 7: finally satisfying to see, but with some compromises

The graphics sector of WRC 7 certainly represents a step forward compared to the past of the series but still fails to come close to the standards of 2017 (dreaming Project Cars 2).

The characterization of the paths, rich in elements and details with aexcellent depth of field although, to allow this, some texture not always high resolution and, in some points of greater density, a pop-up effect not at all invasive but still present.

On the other hand, the liveries of the cars are excellent, well defined and with an excellent level of detail, while the interiors of the vehicles are still poorly maintained.

We also loved thedynamic lighting which, at sunset, gave us some really beautiful glimpses to look at with always perfect reflections on the car. The tracks at night are fun to play (even more so when we have all the broken headlights) and the fog effect is excellently rendered.

The version we tested for PC, as well as that for Ps4, does not appear to be well optimized, with a decidedly dancer framerate, albeit always enjoyable.


The audio sampling of the cars is always credible, at times little differentiated between the different models but, the rejection in the sound field, is due to the track of the co-pilot. Mind you, the instructions he provides are always precise for those who are able to understand them, the problem is precisely in the acting of the voice actor. No particular emphasis, even in the most excited jumps, no change in tone, no possibility to change the voice and, moreover, our co-pilot will continue to give indications as if nothing had happened even when we are upside down in the intent. to turn around like a turtle. Really a disappointment in that sense, with a co-driver audio track following this under-appreciated line for several years now. 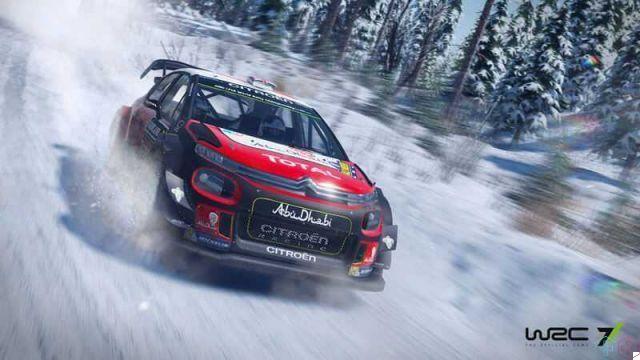 WRC 7: Having all the licenses is not always enough

WRC 7 boasts the official license of the world rally, thus guaranteeing a really large number of tracks (13) made up of about sixty stages. In all this there are the three categories of the world championship or WRC, WRC 2 e Junior WRC with real crews aboard their licensed vehicles (among the various partners Citroën, Ford, Toyota ..).

Certainly there is no shortage of methods ranging from the simple dry test to the multiplayer online (with a lot of rankings and times to beat), from the highly appreciated mode split-screen to the career mode. The career mode is the reference mode for those who buy the video game but, unfortunately, it remains shallow and not very immersive. If on the one hand we have the example of F1 2017, characterized by a curated career mode with related plot interludes, in WRC 7 there is none of this, it is only us who have to climb the three categories without various frills. Even the personalization of the car on a mechanical level turns out to be sufficient, but there are few incentives to work in this sense. 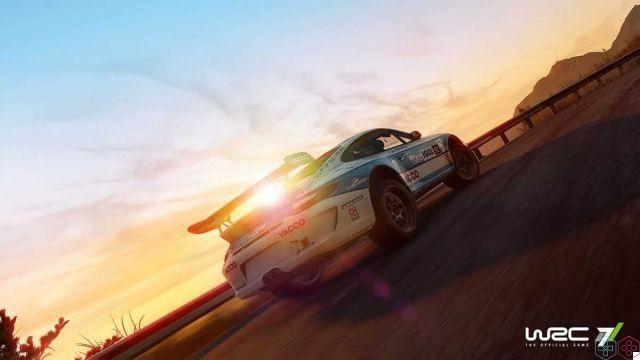 WRC 7: when the rally becomes a hybrid

In conclusion, WRC 7 brings several important improvements to the series without distorting its shape but, unfortunately, brings with it some defects that still tip the scales in favor of Dirt. However, it remains a title that I enjoyed a lot and that I will certainly continue to play for a long time. I advise everyone interested to give it a first-hand chance.

7.3 ON THE RIGHT ROAD BUT FAR FROM THE FINISH LINE!

add a comment of WRC 7 review: when the rally becomes a hybrid