A punitive platformer aiming to reinvent a legacy born in 1994 on Super Famicom: our review of Umihara Kawase Bazooka

We find it difficult to open a review of Umihara Kawase Bazooka without putting The Legend of Zelda: Breath of the Wild in a particular context. Many praised him for the open-world structure that Eiji Aonuma's latest work has implemented in game design. In fact, we could say that the latest Zelda has rather bowed to the standards of the market which has always welcomed it more warmly, the western one. The idea of ​​a contemporary gameplay model risks distorting an established formula, but the risk is often a necessary evil.

At the game we're going to talk about today, to be honest, daring wouldn't hurt. Mind you: the Umihara Kawase series has never wanted to take it easy, with newbies. However, there is a difference between pure difficulty and a complex idea. Regarding the latter, the title we are going to review boasts a very simple gameplay premise. The development team, evidently, has made this merit a pass for a difficulty rate that completely betrays the “kawaii” aesthetic from which the game draws all its charm. The end result isn't bad, but it could have definitely proved more enjoyable. 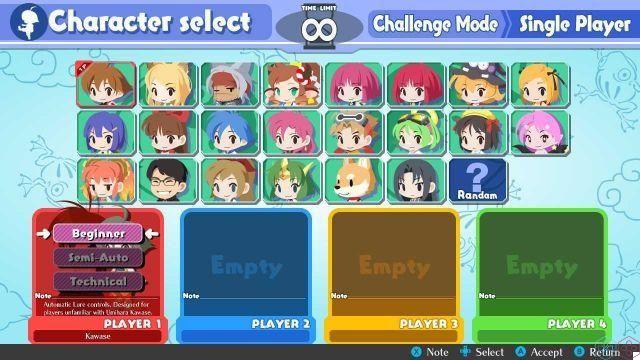 The selection of the level, after having chosen the character with attached skin. All this translates into a pure Super Smash Bros. style effect.

A title that draws on its history - Umihara Kawase Bazooka Review

What to many of us might seem like a little-known platformer, actually has one history behind. Not at the plot level, mind you; the texts for English-speaking only in the game allude to the backstory of the playable characters through short captions, but in the review phase we cannot praise a narration that in the case of Umihara Kawase Bazooka is entirely absent. We can rather talk about the history of the series, of which - as we implied earlier - Bazooka is only the latest exponent.

Umihara Kawase, progenitor of the series, was born in 1994 on Super Famicom; our Super Nintendo. The premise was as simple on a conceptual level as it was cumbersome and brutal in its execution. The eponymous protagonist is one sushi cook hunting for ingredients, and to separate it from the ideal dish provide many levels full of fish and amphibians. Just as our enemies are also the ingredients, in the same way also the fishing rod becomes one of the fundamental tools for crossing the levels. From this shoot was born one of the most challenging platformer series ever. 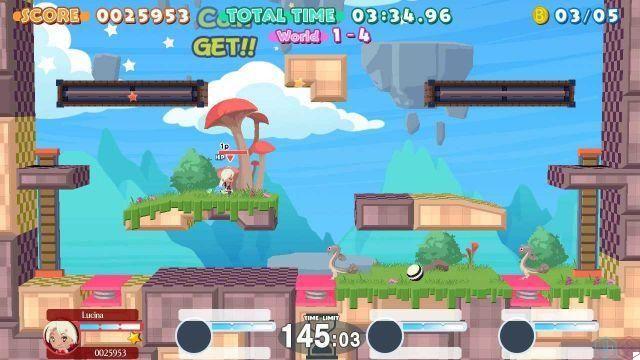 The irrepressible Lucina has just obtained a coin (COIN GET !!). The pink platforms are trampolines with which you can jump higher, but a treacherous eel stands guard in the center ...

The series has received several sequels, scattered between PlayStation, Nintendo DS e PlayStation Portable. The one we are talking about today does not belong to the regular series, but it is a spinoff of Umihara Kawase Fresh! for Nintendo Switch. In the specific case of Umihara Kawase Bazooka, in our review we talk about a more rated experience local multiplayer, for both co-op and competition. Playable characters extend to other Japanese niche franchises, such as the little witch Cotton from the homonymous shoot-em-up. After choosing Umihara as a character to start with, we plunged into the first level of the "classics".

We candidly admit that we missed the "How to play" item in the game's main menu, but we learned the rudiments between one death and another. The aim in each level is to get the monete cataloged by the counter at the top right eliminating enemies, which for the occasion we can pick up with the fishing rod and shoot away (hence "Bazooka"). The basic idea, theoretically, consists of a gameplay halfway between Kirby and Yoshi's Island, albeit with a roster - with an attached character selection screen - in pure Super Smash Bros style .. But in practice?

We would quote the English aphorism "the road to hell is paved with good intentions", if it were not a game that knows how to be more than enjoyable ... Whenever it wants. A little spoiler for this Umihara Kawase Bazooka review: there is no infamy in the finished product, but not even any praise. What we have in our hands is more honestly describable as a rough diamond. He certainly does not lack potential, but maniacal devotion to a legacy of gameplay that does not go well with contemporary videogame fluidity overwhelms him with an anachronistic difficulty. 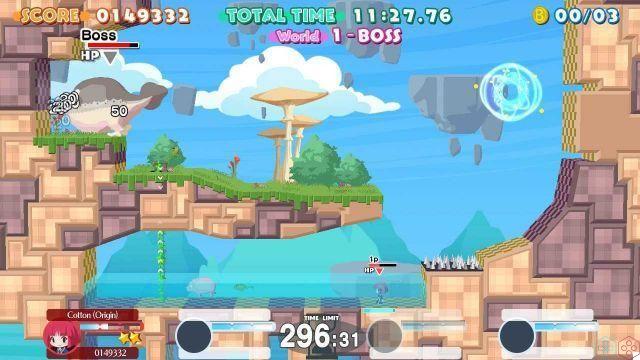 The first boss is also the scenario in which water is introduced. Obviously there is a drowning mechanic (light blue bar, under the character).

The first level of the game opens with an apparently very easy scheme: we just have to bite some enemies, shoot them at others and ring them as many combos as possible. To help us provides our spawn in the level, with which we can already catapult ourselves into the heart of the action. Describing the game's gameplay in words, however, risks giving it too much credit, or rather: the sessions can become fluid, intuitive and, why not, even frenetic. The problem is the constant feeling of not having full control over the characters, whichever of them we find in our hands.

We already knew that in a platformer you can finish in two hits; it's a kind of inherent dogma of the genre, not to mention a luxury. Unfortunately, during the review phase, it was enough to be hit by a single enemy to understand that Umihara Kawase Bazooka is one of "those" games. Any damage suffered, in fact, has the annoying tendency to throw us backwards, making us bounce on our backside several times. It may seem little, but in reality the positioning of the enemies makes stunlocking a more than common inconvenience. A real shame, given how much fun the game can (can) become once you master the controls and level design.


In true Mario vs. Donkey Kong, the tenth and final level of each of the four worlds consists of a boss. Each of them involves the massive use of the fishing rod to make it vulnerable, only to hit it with the double jump (plenty of minor enemies permitting). There's no point wasting time on other strategies - standard attacks drain each boss's life bar too slowly to be worth it. We learned it between Game Over and the other; a screen, this, which we will be able to get to know several times. 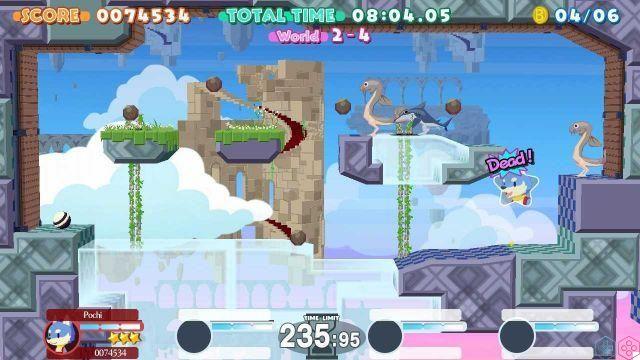 The second world boasts a setting in the style of the Sky Sanctuary Zone from Sonic 3 & Knuckles. We really appreciated it. Don't be fooled by that “Dead!”, Even after losing a life, Pochi remains one of the best characters. Even against the biggest enemies.

We didn't bring up Mario vs. Donkey Kong at random; this review of ours by Umiwara Kawase Bazooka would be incomplete without spending a few words on level design. The possibility of doing ours fishing pole an improvised grapple allows us to cling to every possible wall, albeit without the immediacy of the rope that facilitates the crossings in a random Worms. This is an obligatory choice of game design, given the small range of our jumps: an enemy, a mine or a current out of place is enough to bring us back - through displacements or premature deaths - to the starting point.

This is not a level design that shines for verticality or anything else; if anything, it is a series of “old school” levels, visible in their entirety in one single screen. To compensate for our slowness, updrafts, escalators, conveyor belts and so on provide. The result brings to mind the complicated Rube-Goldberg mechanisms, where, however, instead of the domino there is the tremendous combination of the enemies we need to get rid of - balls included, which turn into mines if grabbed slowly - and the very structure of the level.

We can also test honed skills in single player with the mode multiplayer, and we took advantage of this digression to test the game online. In the review phase, Umihara Kawase Bazooka's matchmaking has joined us with a player from the Land of the Rising Sun. We would gladly make fun of the emblematic relationship between Japan and the difficulty rate of the title, but the truth is that the game has managed the long distance with commendable fluidity. This is not a graphically excellent game, but for the practical purposes of the gameplay this title has stood the test very well. 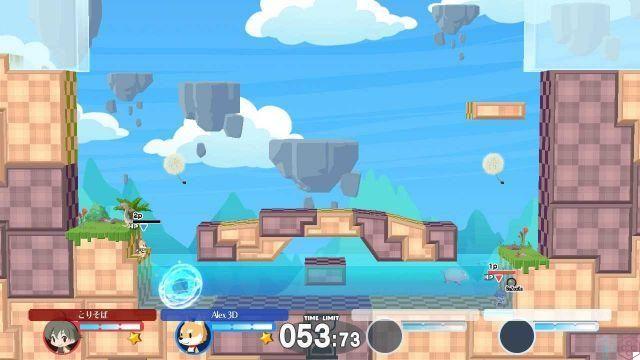 The connection held up very well, us a little less. The "player 1" against which we played has torn us apart, also thanks to the dynamic removal of the camera that we did not expect.

Let's close the accounts with the game by talking about the graphic factor just mentioned. Visually, the game closely resembles the graphics engine of Megaman Powered Up !, the underrated remake of the very first super deformed style Mega Man on PSP. The result is convincing, but only up to a point: the smaller enemies, especially the treacherous frogs during the first boss fight, are so hard to see that they send us to the title screen multiple times for that very reason. If you want a more successful updated formula, fall back on BurgerTime Party! by Data East.

Il sound compartment it contains every possible aspect "without infamy and without praise" of the title. Musically, the game boasts a sound catchy, but these are not exactly melodies that we will find ourselves whistling in a short time. Much of the blame, if we want, is to be attributed precisely to the difficulty rate: the four worlds of the main campaign are one more challenging than the other, and they can take days for newbies as well as a couple of hours for experts. In both cases, the need for melodies capable of giving identity to the scenarios disappears, and the latter pay the price of a somewhat anonymous audio. Good audio clips of the characters; another demonstration of the professionalism of the Japanese seiyuu.

We just talked about the longevity by Umihara Kawase Bazooka, and in the testing and analysis phase it was immediately clear to us the target to which the game is aimed. To the detriment of the reinterpretation in a party game key, it is not a game that particularly leaves its comfort zone. Rather, the appeal hints at the niche of longtime fans who love the series for what it is. The game camps on multiplayer to extend beyond the forty toughest scenarios to survive, but whether it's single player, co-op or competition, all the players involved will do well to arm themselves with patience, on pain of forgetting. 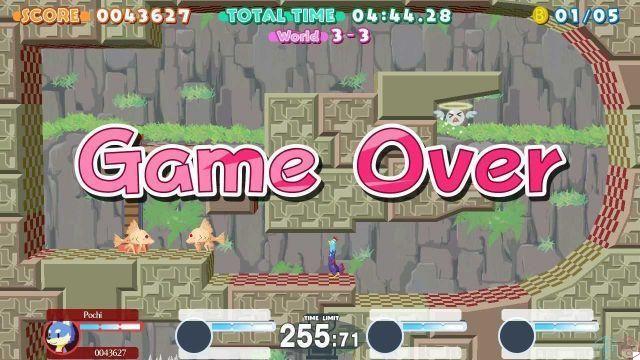 A lot of patience.

We did not escape the modus operandi with which Umihara Kawase Bazooka was conceived, but during the review it was very difficult for us to be able to recommend it a priori. For the scope of the game, thirty euros they are not at all few; even after a discount it remains a purchase to ponder carefully. If what we have said so far has convinced you or you are already a fan of the saga, you have our blessing; if you are only looking for a platformer with a high level of challenge, you can find a better quality / price ratio by spending less (Mega Man Legacy Collection) and more (Crash Bandicoot N. Sane Trilogy).

Our review ends here; we always give you an appointment here on techigames, so you don't miss anything in the videogame world.

6.5 Recommended for the niche only

Vesper review: the charm of the end of the world ❯

add a comment of Umihara Kawase Bazooka review: four jumps on a stretcher