Prey was one of the best titles of the past year, and frankly the most groundbreaking FPS of the last few years. Prey Mooncrash DLC has recently been available, which on paper adds a lot to the game and brings a breath of fresh air to this splendid title: will it live up to expectations?

Let's start by saying that the expectations for this DLC were really very high. Prey was a title that left a very deep imprint in my gamer heart, and seeing this DLC after a year, put me on one side on alert and on the other made me want to find out what was new. Arkane at E3 presented him as a Revolutionary DLC, so any fan of the title quickly got caught up in the hype!

Prey Mooncrash: lots of meat on the fire

After seeing such a trailer, any player would be very excited, with very high expectations even in relation to the base game. Anyone who has played Prey has appreciated it for its great usability. The adventure that Prey makes live remains very impressed, especially because it is possible to enjoy every aspect of the game with calm. Searching and exploring very meticulously it was possible to find many objects that told an extra part of the story by rewarding the player who went to thoroughly explore the work. This was one of Prey's greatest strengths.

Mooncrash twists that. As soon as you start the DLC you notice how it's all a great race against time. But without wanting to leave too quickly, what is the idea behind Mooncrash? Offer content that is different from the game and in some ways complementary. To begin with, complementary from the point of view of the narrative modus. In Prey we play the role of Morgan Yu, in this DLC we have a lot available 5 characters. Each character has unique characteristics, and therefore different evolutionary possibilities. Unlike Morgan Yu, who we could freely evolve, these characters have limited power-ups. Of course, we always talk about many possible upgrades thanks to NeuroMods, but after having granted a possibility of total growth of the character, returning to putting limits in this seems to us like a step back. 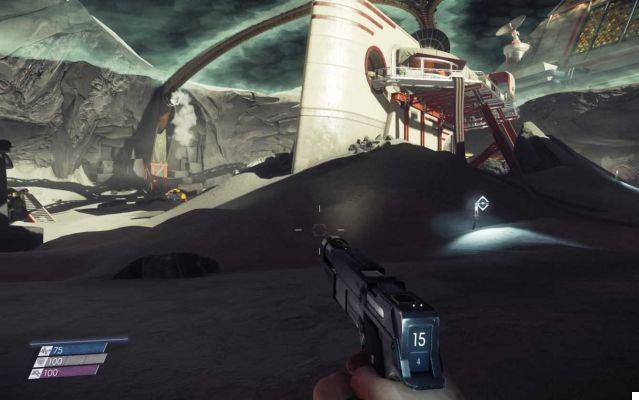 But let's take a step back: let's play a guy named Peter who is presented to us as a hacker hired by the STRENGTH (obscure society of which we know little) with the task of finding some information kept on the Pytheas lunar station. Peter lives in a small satellite, hoping to return home, and I intend to complete every task assigned to him. But this character doesn't really have depth or charisma, essere essere just a puppet following orders. In the simulation, in one of the 5 characters mentioned above, he will go in search of information in a world generated by the simulation.

This simulation is the key to the game itself. The Pytheas map was created by Arkane and does not undergo any changes, while everything else is generated in an almost procedural way: enemies, environmental conditions etc. Too bad that it changes very little and that these variations do not lead to any real difference in terms of the strategies and approaches to be adopted. Variables are added as we progress, which should complicate things. Too bad they do nothing but add small annoyances. The areas are also small. You end up slowly falling into a sort of loop. You advance, you unlock something (also characters since you only start with one), die and start again. The same map is experienced many times with nothing actually different. The resources then have to be managed wisely but not too much: when you die with all the characters you start again to have all the resources for that given mission. Yes, dying has practically no consequences other than having to repeat all the actions that were not completed at that stage of the game.

In addition, you must always do everything in a hurry: as time progresses the simulation becomes more and more corrupted and new enemies appear. Which adds variability, of course, but prevents us from enjoying the title to the full. In Prey we have been used to exploring calmly, here instead you have to do everything in a hurry and this, unfortunately, clashes a lot with what the game is.

The icing on the cake of this DLC had to be Typhon Hunter, but it will only be available in the next few months. Perhaps this mode would have represented a real welcome change by introducing a form of asynchronous multiplayer. From the announcement we understood that it will be ato 5vs1 mode, in which 5 players will be in the role of mimics and 1 as a human. The human player must survive the pitfalls and attacks of the mimics! Surely having this mode already now would have changed the balance. We'll see when it comes out if it's able to really add anything. 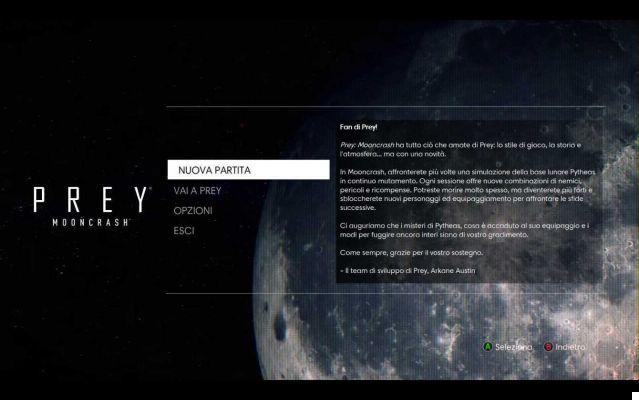 After the splendor of Prey we fall into the mediocre and the incomplete. For 20 € Prey Mooncrash offers a game mode that totally clashes with the dynamics of Prey. Too far from the original game to appeal to the same audience to whom the base game was sold. Furthermore, the lack of Typhon Hunter mode, currently only announced, weighs heavily in this evaluation. Practically today we are going to buy a Incomplete DLC, lacking in its potentially more interesting modality.

Is it worth the money? If he had Typhon Hunter with him already now probably yes, the work behind a multiplayer mode is very big in a game that is basically not multiplayer, but without this mode it seems to us that the price is too high. It would have been better to offer two DLCs at a cost of 10 €, or wait to release everything together. So, to date, this is a nice DLC with a very bitter taste. We are buying a DLC in Early Access and it seems like a big joke to us.

Do we advise you to buy it? Not yet. Better wait to see Typhon Hunter firsthand and then see if it's worth it!

add a comment of Prey Mooncrash Review: DLC with a bitter taste