Outcast returns in this (medium) remake that doesn't want to know how to propose itself in a smart and honest way: let's find out why Second Contact does not deserve your attention

Eighteen years. This is the time between the original Outcast and its (half) remake Outcast - Second Contact. Every return from the past is based on two pillars: the need to offer oneself to a new (or even just modernized) audience and the need not to betray one's identity. A path that is more difficult because of the time elapsed.

How much do eighteen years weigh?

Outcast is considered a pioneer of the open world thanks to technical innovations and a non-linearity that immediately allowed to explore the whole game world, equipped with complex rules. It won many awards and became a small cult object among enthusiasts, without however achieving great fame.

Outcast told (and still tells) the story of Slade Cutter, United States Navy SEAL, a man in one piece who has been called to duty once again. His new mission will require him to explore a parallel world, reached via an open passage from a failed experiment linked to subatomic particles. That passage is sucking up our Earth and Slade, along with three scientists, must stop the anomaly.

On the journey to the other world, however, something goes wrong and Slade awakens in the midst of aliens, the Talans, with no idea where the scientists are. The SEAL discovers that the inhabitants of the planet (Adelpha) consider him an Ulukai, or a messiah whose arrival has been announced by a prophet. The Ulukai's job is to defeat Fae Rhan, an evil dictator. Slade, alone and without most of his equipment, accepts this role to enlist the help of a small group of rebel Talans. This is where our story begins. 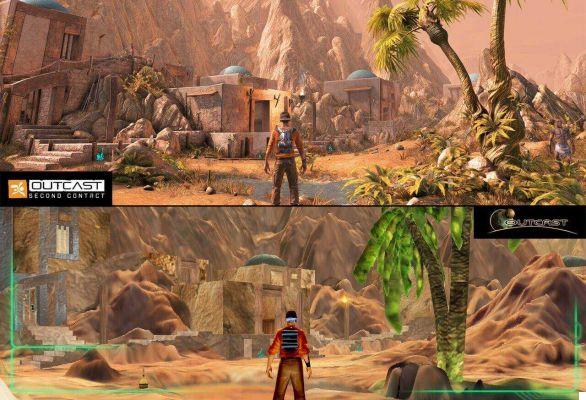 This (half) remake offers a whole series of new features and improvements. The controls, the view, the game speeds, the menu interface and various details have been tweaked compared to the original version. The developers claim to have added new areas and, in addition, some mechanics that were invisible in 1999 have now been made more explicit through a special menu. The graphics themselves have been almost completely redone, especially as regards polygonal models and textures.

However, the narration, the sound sector and the game mechanics have not changed in any way. Today as yesterday our task is to find five Mon, sacred objects for the Talan, hidden in as many regions of Adelpha. This is our main mission, but in each area we will also have to deal with a whole series of NPCs who will offer us secondary missions. Among them, there will always be a governor of the region who, once certain conditions are met, will agree to help us in the fight against Fae Rhan by provoking a workers' revolt. In practice, this will weaken the enemy soldiers making our life easier (for example: by blocking work in the cultivation fields, the soldiers will have no food and therefore less health).

Slade will have up to six guns on his side (we will start with just one) and will have to fight the faithful to Fae Rhan through firefights and stealth mechanics.

Although each element has been modernized, to a greater or lesser extent, Outcast - Second Contact turns out to be from most points of view too old a work. It is characterized by an age that does not present itself as a rediscovery of lost mechanics and still holders of a solid playful core, but imposes itself as a revival of outdated ideas that become disrespectful to themselves, as modified by falsely modern updates and which do not they can satisfy neither the already saturated fan of years of experience nor the new player.

Outcast - Second Contact comes with a third person shooter (without cover of course) with a semi-automatic aiming system in which the player only has to try to direct the pointer towards the enemies and press the trigger while the weapon decides alone whether to lock the target or not. There is also the option of making the management of the aim completely manual, but this is not recommended due to the woodiness of the controls and the movements of the protagonist.

The fight revolves around a slow and repetitive game of hide and seek, in which the enemy AI will only be interested in keeping a safe distance from us by firing a fair number of shots, conveniently able to penetrate obstacles. However, these bullets are slow and predictable: the modern player will immediately understand that it is enough to fight from medium range to dodge most of them.

If this sterility action were to push the player to attempt stealth approaches, he will be forced to quickly change his mind. Slade is unable to fight stealthily (through grappling or silent strikes) but only to move hunched over to avoid enemies. An approach that can be useful for placing explosive traps and eliminating enemies indirectly, but which turns out to be only slow and uncomfortable, not preferable to, only uncomfortable, face-to-face combat.

Fortunately, the enemies are limited in number and will not reappear after death. So soon we will be preparing to enter a new region, guns in hand, intent on getting rid of every red dot on the mini-map, not so much because it is requested by the game, but because we do not want to have trouble when we have to run around to complete missions. 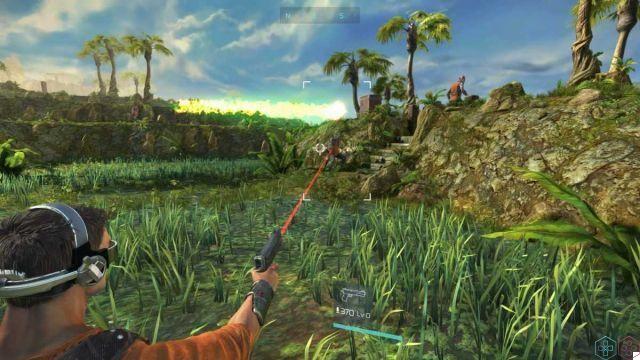 And it's the mission system is the very core of Outcast. Between main and secondary, we will go to the discovery of the game that defined the abbreviation of the open world.

Outcast turns out to be mostly a large and layered fetch quest, or that type of mission in which a client asks us to find an object and bring it to him. It is also true, however, that the game goes to great lengths to insert context into the hustle and bustle in which the player is involved. Adelpha's world, with all its ideologies, terminologies and stories, opens up to the patient player who agrees to complete any available dialogue. A certain verbiage is a not particularly onerous price to have to pay in order to enjoy the true unique value of this (half) remake.

Unfortunately, after the dialogues, we have to go back and forth to collect some material, to look for a Talan in the crowd helped by the localization system which, in the original work, was nothing short of revolutionary, but nowadays it is a funny way to save yourself from necessity. to work on level design. On many occasions, in fact, we will have to find a specific alien and we will have to do it by asking a passer-by if he has seen it: this will show us the direction (with the cardinal points) and give us an idea of ​​the distance ("take many steps", I've heard it often). Here then is found Zun, who will give us a crank for Quon who will ask us to take it to Molen. So, if you don't understand, no mission indicator, no arrow telling us what to do: we will have to talk and look around; normal at the time, strange to some today. This is the only non-modernized element that still has something to say, requiring a little attention and commitment, but which alone cannot support an entire play structure.

Run here and run there, then, with a tediously expensive stamina system, with the sprint activating late and tied to the same dodge key and rolling us to the side instead of cornering on the run, with the jump having a unmanageable animation that fails to hang from the holds twice out of three and a camera that struggles every time you enter a closed environment. All in a world that has been covered by new polygons and new textures but which is often a semi-flat and semi-empty expanse, stylistically only discreet although sufficiently varied, and which is boring to explore whenever you try a little three-dimensionality.

Outcast: from the past to the past

A world that is not only a little poor, but also technically back a generation. Outcast - Second Contact is a decent PS3 game (no, not PS4, not a typo), but with almost all of the original animations (don't expect PCs to move sensibly when they talk). Add in a frame rate that struggles to keep up to thirty fps, assorted graphical glitches, all-too-frequent crashes (whose damage is limited by the frequent autosave system) and you get an idea of ​​the slender frame that holds this game up. If that weren't enough, the whole system of menus and interface (recreated for Second Contact) is a sterile dull white on semi-transparent blue. Stylistically horrible and hard to read in most cases. To top it off, the Spanish subtitle adaptation is far from error free.

A set of flaws that annoy the player who is not enticed to continue even from the main storyline of the game. The five-minute opening video tells more than there will be in the rest of the work, that turns out to be a set of specks (to be kind) and who has a "plot twist" telephoned from the very first moment as the only arrow to his bow. As already said, at least the world of Adelpha is interesting to discover: we cannot speak of a real main plot, but more of a context which, however substantial and real core of the work, cannot be enough to create involvement and interest in future events.

Then we add the presence of the original dubbing, which by today's standards is enjoyable like a trumpet shot in the ears. Fortunately the ost is of high quality and manages to give a little atmosphere to a world that has not been re-proposed in the best way.

And this is precisely the point. The problem is not the old mechanics and which cannot attract a modern player (whether it was born or has become one, little changes) or a technical setting that has not been able to reach even the levels of the worst budget titles of recent years. These characteristics would define a title unsuitable for many, but perfect for fans who want to support a beloved work with their hard-earned cash.

Outcast (the original one) deserves respect and to be discovered even for a philological taste, but Second Contact is an unsuccessful attempt that tries to modernize itself without any kind of commitment, if not, to be cynical, to make money with the name alone, given the € 50 required. Outcast fans, play 1.1 one more time and forget about Second Contact.

In case you are still interested in the work, new players, expect about twenty-five hours of gameplay to complete the main storyline and 60-70% of the secondary ones.

One final note: the game obviously has trophies; absurdly, platinum is obtainable before even finishing the main storyline. This obviously does not affect the vote, but represents what Outcast - Second Contact is: a product made in a careless way, that is something not to reward.

Thanks to Bigben Interactive for granting us the code for the review. The game is available on PC, Xbox One and PlayStation 4 (version we played).

5 A product not to be awarded