The proposal that Milestone offers this year with MotoGP 19 is enriched by several innovations, such as the new artificial intelligence, but let's find out if it convinced us in the complete review

Milestone, the very Spanish videogames developer company, has officially started dealing with MotoGP with “MotoGP 07” for PS2. After several videogames focused on the most famous motorcycle championship in the world, which often and willingly have had shortcomings, they seem to be on the right track. So let's see what convinced us and what didn't, in our MotoGP 19 review. 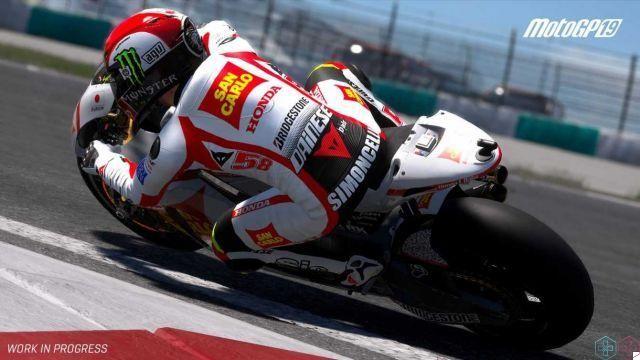 Once the title is open, we will find the various game modes such as "Quick Modes", "Career", online multiplayer and "Historical Challenges". The first category listed will allow us to carry out a Grand Prix in which we will be able to select the driver, track and set it as we see fit. In addition to this we will be able to start a Championship (always settable personally) or a classic Time Trial with which to perfect our driving style and try to improve more and more.

Career is certainly the most popular mode and that can give you more satisfaction. This is divided into "normal" and "pro", which offers a higher level of difficulty. In MotoGP 19, the first championship available will be the Red Bull Rookies Cup in which, through a handful of races where all the riders (including us) will have the same bike, we will have to get noticed and then move up to the next championship. This year our choice will not be restricted and we will be able to start competing in MotoGP right away.

The online will allow us to compete against other players, but also to be real match directors, going to administer what concerns the box. The category "Historical Challenges”Offers a high number of competitions divided into different groups, starting from the 500cc up to the present day. In the various challenges, each of the 50 pilots will have a goal to accomplish and, based on other secondary challenges, we will unlock different rewards such as historic bikes or the riders who rode them. The constant in all categories is obviously Valentino Rossi, but interpreting other two-wheel heroes such as Sete Gibernau and the incredible Marco Simoncelli, will undoubtedly give strong emotions. 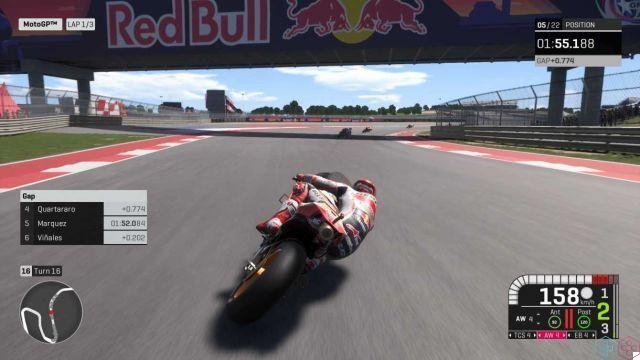 The new Milestone title has also welcomed some tricks on the gameplay side, which make it more realistic and a little more difficult to master initially. The most obvious difference, when we project ourselves in one of the 22 available tracks, is for sure the braking mode.  Getting the timing right for braking, going to use both brakes at the most appropriate time, is the hub of competitions. All this has certainly made us notice that compared to other years, the times in competition and not, are similar to those achieved by the pilots in the flesh.

Physics has undergone a nice improvement and, by customizing the level of the latter, it is possible to transform the gameplay from arcade (for newbies) to semi-simulation (for the more experienced). The harmony that the game physics is able to give, combined with the fluid animations introduced last year and improved this year, is really enjoyable and, if we set it to the maximum while not concentrating, the rear will start which is a beauty!

Obviously, also this year it will be possible to customize the set-up. This customization can be done by themselves, or by communicating to the mechanics what is wrong so that they work to improve everything. Furthermore, on the track, we will be able to change the electronic values ​​which in many cases will make the difference. A novelty that we appreciated is the limited assortment of tires that can be used throughout the weekend. The tires must be changed personally and, in case we forget to change tires, we will start competing with the worn ones being far slower than the opponents. 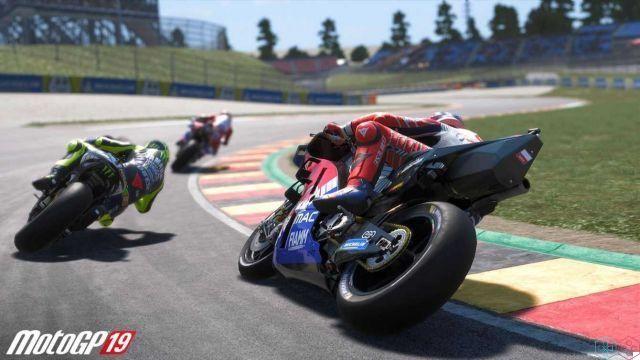 I present to you ANNA | MotoGP review 19

The main novelty on which Milestone has focused this year is the new artificial intelligence, code name: ANNA (Artificial Neural Network Agent). The new AI, in fact, is more dynamic and realistic thanks to the technology "Reinforcement Learning". Put simply: AI-controlled pilots develop the ability to understand which trajectory is best to take and manage to drive in a way that does not cause accidents, taking care that there are other opponents around them.

One of the most negative sides of the previous MotoGP was, in fact, the intelligence applied to the riders controlled by the computer who, often and willingly, went to throw themselves at us in the corners, making us mistake trajectories or slide on the asphalt, not to mention the tingled when braking.

One of the most beautiful consequences that ANNA produces is the formation of various groups within the competitions. In fact, the pilots will not form a long train, stacked like glasses, on the contrary: they will fragment within the circuit, forming the classic slower, medium and faster groupings, with the first ones taking flight becoming irrecoverable in case we cover more positions. low.

Let's be clear, this is certainly not perfect artificial intelligence since sometimes some bullying will come upon us, but the collaboration with Orobix has allowed the developers to make more steps forward than in previous years, directing them towards the right track to follow. and that, sooner or later, they will be able to shape perfectly.

Last year, with MotoGP 18, the new graphic engine based on Unreal Engine 4 was introduced which had improved the visual sector, but halved the frame rate on consoles. Unfortunately, one year later, this last problem persists but the visual impact has improved. Indeed in MotoGP 19 we find cleaner graphics, with better textures, a lighting system that creates beautiful reflections (especially when the asphalt is wet) and excellent shadows.

Riders and bikes enjoy pretty good 3D modeling, which is no exception for the champions of the Historical Challenges either. The tracks (19 plus 3 historical circuits) boast an almost perfect in-game transposition, with all that is (or was) around. The sounds also improved which, with this title, have come closer to the real rumble of two wheels. One of the sore points is in the textures of the models beyond the map, often in poor resolution, but this can be passed on very well. Also the kinematics are not that great as they suffer from woody animations, unconvincing faces and too bright colors, in the pits.

An addition not to be taken lightly is the editor that will allow us to create, step by step, real graphics. The editor is divided into: shapes, letters, numbers and drawings, which can be applied on our helmet, at the bottom of the suit or in order to create your own number. In addition, you will be able to download other players' works or share ours. This increases the feeling of immersion and at least allows you to stand out from the crowd.

All standing on the sofa!

To conclude this review it can be said that MotoGP 19 is one step (even two) ahead of its predecessors. The developers have finally worked on the shortcomings that most afflicted the title, going to propose an experience that is still far from perfect but, by better shaping the new ideas, it can be achieved in the future. One thing is certain: the emotions that this title will give will make you stand up on the sofa!

We would like to clarify that our test was carried out on PlayStation 4.

Please note that MotoGP 19 is available for Microsoft Windows, PS4, Xbox One and, from June 27, also on Nintendo Switch.