After the first big test with I Am Setsuna, Tokyo RPG Factory returns to the charge with Lost Sphear. The title is a tribute to the RPGs of yesteryear, with which the current thirty-year-olds grew up during their videogame childhood. Between so much tradition and some innovations, the game has pleasantly impressed us

A lot of today's "young adults" will nostalgically remember him the nineties. In those days it was easy for a RPG was published a few weeks after the other. In those years a really high number of masterpieces, mastodons that still today have not ceased to be talked about, perhaps re-proposing themselves in many (too many?) remastered. Let's think about final Fantasy, the Secret of Mana, But also to Chrono Trigger e The Legend of Zelda.

Tokyo RPG Factory has already shown, about a year ago, to love that era and its productions. He did it with I Am Setsunaof which Lost Sphear, which we examine today, is none other than the spiritual following, the newest cousin. It is not only the graphics sector that betrays the kinship, but the rhythm, the characters, the game mechanics. For RPG lovers there will be practically nothing outside of an appreciable consolidated formula, but the younger ones will probably appreciate it, too, thanks to some techniques to make extremely static formulas more varied.

Let's examine together Lost Sphear in our review.

At the base of the plot of Lost Sphear is a wise one mixture between the fog and the memories of human beings. It's about a deep symbology which deserves a separate article, here we will limit ourselves to providing you with the general coordinates without ruining you the pleasure of surprise in the game world. Quite simply: the world of Lost Sphear has been invaded by a strange fog, which has enveloped places, environments and people. It is an unnatural and very dangerous phenomenon, since whoever is touched by it it ceases to exist on our plane of reality.

The appearance of the fog is linked to the fate of Kanata, an orphan living in the peaceful village of Elgarthe. Kanata moves out of the country just as the fog arrives, and upon its return finds everything lifeless. The spell does not last long: the protagonist discovers that his touch, as mystical as the natural phenomenon, it is able to restore what it encounters to its original state. In this way he manages to save the village and loved ones. His touch acts on the memories of places and people, hooking them to our plane of reality and bringing them back. In short, a lifeline in the true sense of the word. 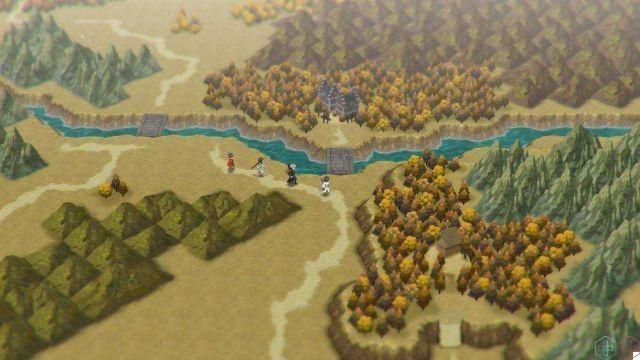 But there is only one of Kanata, and the world is vast: for this reason the hero decides to go on a journey with his old friends. It is about Lumina, Locke, and the mysterious boy with white hair who appeared as if by magic in the village when the fog arrived, and observes in fascination the magic of the phenomenon ...

The right amount of strategy

The comparison with Chrono Trigger at the beginning of the article it was certainly not thrown at random: the combat system of Lost Sphear owes a lot to the early chapters of the series. The party characters (fixed at four) will find their place at the beginning of each battle, arranging themselves a bit randomly in the area around the enemy. The field takes on the indistinct contours of a bubble of fog, continuing with a constant shade towards the outside. All the action, of course, happens within it, even with many enemies at the same time.

Our task, as a good one RPGs in turns, it will tell what to do to whom, and in what order. The characters will then carry out our commands, having more or less success depending on a certain amount of factors that make it Lost Sphear extremely rewarding as a strategic one. Even the position occupied on the battlefield makes sense: and this is the main factor of innovation within one traditionalist series. The blows inflicted on the enemy from a certain position, more or less backward, will be able to inflict a more or less high dose of damage. It varies from character to character, from place to place, and from enemy to enemy: so imagine how important it is to calculate everything meticulously in the middle of the fight.

Heroes are capable of performing physical, ranged, or spell attacks; or they can pass the turn or defend themselves from the attacks of the opponents. Your choice of course will have to be well thought out, depending on the position and the health and skill points of each of them. On average we didn't find Lost Sphear too difficult, to be honest, but certainly as the adventure continues an increasingly higher degree of challenge makes things interesting 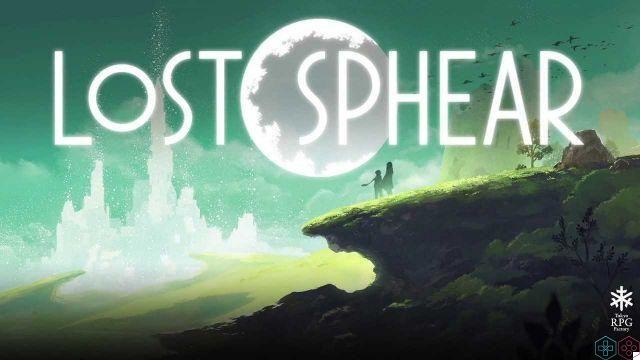 The charm of the fog

Lost Sphear su PlayStation 4 it is really very pleasing to the eye, with well-defined polygonal models but above all breathtaking views. This especially in places with a perspective from above and immersed in the fog: it will be some residue of Romanticism. We also got to take a look at the version for Nintendo Switch, and especially in tablet mode it's not doing badly at all. We imagine that the technical limits of production are felt more on PC, where an increasingly demanding user expects for some reason almost a exasperated photorealism. But above all, on PC there seems to be a few complaints too many by the way game controls: practical and effective with the controller in hand, less intuitive with the keyboard and mouse.

Lost Sphear Is a great one RPG, and once again demonstrates how an increasingly large audience is ready to welcome a genre that is disdained even on home consoles. Spiritual heir of I Am Setsuna, expands the mechanics with some timid introductions, but without upsetting a formula now tested and working. We expect another announcement within a few months, a title capable of closing this interesting spiritual trilogy. Meanwhile, Lost Sphear will give us a lot of extra hours of fun.

7.5 An RPG from the Nineties