Sometimes simplicity is the key to success. Kingdom Two Crowns is one of those titles that exists thanks to the success of a simple game before it. Let's find out together this sequel title of a great indie hit in our review

Kingdom Two Crowns is the sequel to Kingdom New Lands, and brings with it the legacy of a title that was born in 2013 as a flash game. Today this sequel arrives on PC and Console which represents the consecration of the title to a real saga. In the review we will try to understand what this title offers!

The title name is a nice way of telling the world that Kingdom Two Crowns is now multiplayer. You can tackle this game world together with a friend and conquer lawless lands. A 2d world that needs a lot of effort to be managed? This is the key to the success of this title. We find ourselves leading a King / Queen without a kingdom who will slowly have to forge his own by civilizing various islands. The 2d world is full of elements. There are chests with resources (coins or gems), small “wild” villages populated by units without a master and various points of interest that can be a source of resources if redeemed with coins or gems.

You can also find mounts other than the classic horse, each with unique peculiarities. Within the map there are portals with another dimension teeming with thieves. These units come out at night to attack our possessions. However, if you go near the portals, even during the day you could fall victim to their thirst for resources. The heart of this chapter is the multiplayer experience, for now consisting of a split-screen with local coop (online will be implemented later).


Being a complex title to manage, being in two basically allows you to divide the tasks. For example, one player will go to requisition resources for the kingdom while the other will be able to manage the latter. This is a good multiplayer implementation that could, in some cases, be a thread repetitive and make the game too simple. 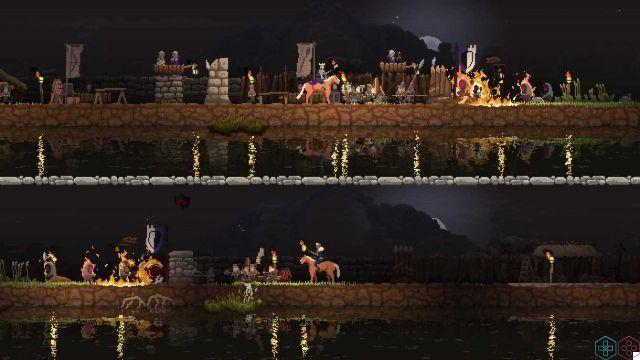 We are in front of a strategic title that bases its gaming experience around the simplicity of the game mechanics. There are no complex menus. Everything was managed by accumulating resources, moving around the map and managing units. We will be constantly busy moving around the game world: it takes more and more time to get from one point to another on the map, so it will also be necessary to properly manage the movements. 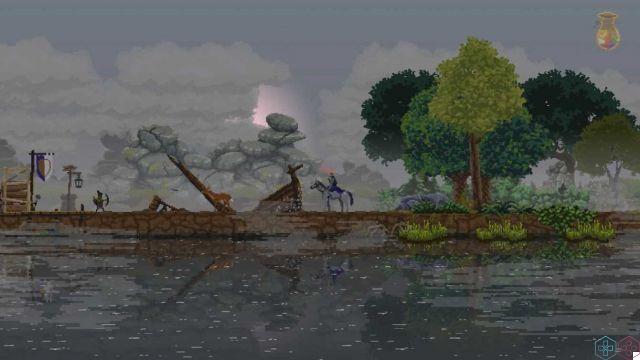 There are several types of units that we can create. These can be recruited at specific points on the map (unlockable by expanding) starting from ordinary citizens. Also present is a merchant who will go to exchange merchandise on our behalf bringing us coins. The placement of units on the map will be important, after all, even the latter will have to range within a great kingdom and will take some time.

Resources, although conceptually they are simple to obtain and manage, they always turn out to be a problem. This makes Kingdom Two Crowns a difficult strategy even if simple in the mechanics and approachable by anyone. Small side note, units are not foolproof snipers and often don't hit the enemy, at least initially. 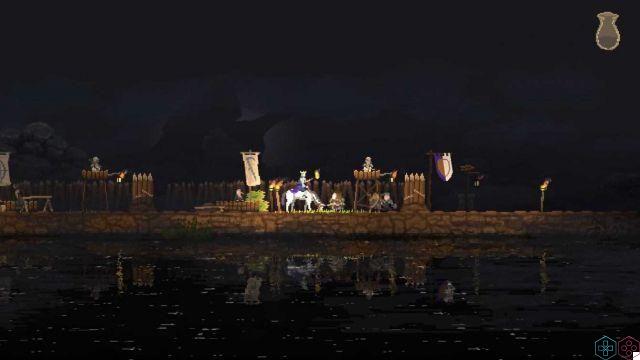 What we have noticed is that as our kingdom improves, the units also improve and with them the accuracy of the blows, the speed of construction and the speed of action of the peasants and more. Another key point will be the movement between neighboring lands thanks to the sea located near the kingdom. In campaign mode, each map will feature a ship. Through the ship we could move between the various territories. This further complicates the management of resources by vertically increasing the difficulty of the title itself.

The only facilitation compared to the previous chapter: in the event that your King loses the crown you can start from the ruins of the kingdom, and not from scratch! We were convinced by the mechanics of this title and entertained for really many hours, but it does not end there.

Paragraph in itself deserves the 16-bit graphics of the title. We are faced with a splendid pixel art like not seen in years. On the screen there are really many elements and each of them is well represented in its simplicity. The backgrounds are magnificent, the changes between day and night well represented. The icing on the cake is the cure for climate changes. And if that's not enough, the soundtracks are also well curated. The result is an immersive experience within a truly beautiful 2d world. 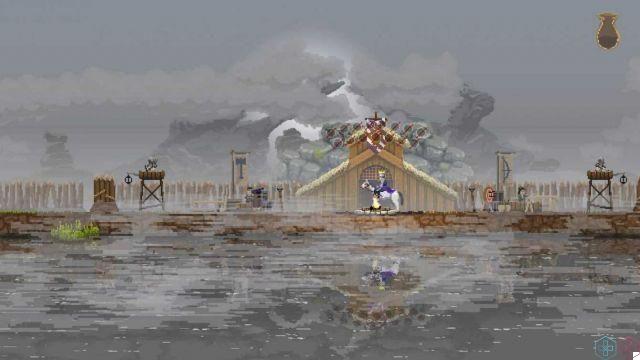 What is surprising is how this solution works better than many 3D titles. Care is always the key to a title's success regardless of its budget. Wanting to be bad with Kingdom Two Crowns the only negative point can be found in the repetitiveness of the actions within the title, but ... after all we are talking about a strategic one with deliberately simplified mechanics, it could not be otherwise.

At the end of this review, we just have to recommend this title. We are in front of one splendid strategic with a light heart, that will be able to entertain players for a practically infinite number of hours, alone or in company. We would also like to recommend this title as an excuse to introduce your children to the strategy genre: there is no violence, the defeated units disappear in a bubble if they are enemies, or they will simply be deprived of their belongings if they are the player's units.

Of course, it will take a lot of effort on the part of the parent. Especially initially, while explaining the game mechanics to his son, he will find himself managing everything by himself. After all, a title for a child must be instructive and what could be better than Kingdom Two Crowns to teach the value of money and work? These can make a wonderful gift for Christmas. This too is a positive aspect of Kingdom Two Crowns: being able to involve even different generations with simplicity.

Kingdoms of Amalur review: Re-Reckoning, too much dust! ❯

add a comment of Kingdom Two Crowns review: indie in name only