In this review we will tell you about Alex Kidd in Miracle World DX, the remake of the classic platformer from the XNUMXs

The platformer is one of the most videogame genres ancient: the first titles that can be connected to this trend date back to the first half of the XNUMXs, when the industry was still in its infancy. The video game we are about to review takes us back, in a certain sense, to that period: it is in fact the remake by Alex Kidd in Miracle World, first published by SEGA way back in 1986.

Despite a renewed graphics, for this new version of the game the development team has chosen to stay faithful to the original both in terms of level design and gameplay. Let's find out together in this review whether these choices influenced positively or negatively Alex Kidd in Miracle World DX.

Alex Kidd alone against everyone

The plot is certainly not the central component of the title and, in fact, it is rather minimal. The protagonist Alex is a young martial artist who lives near Radaxian, a city of the Miracle World. The peace of the region is threatened by the arrival of the villain Janken it big who, with the support of his army of monsters, defeat the rightful king and kidnap his son: the prince egle.

Alex is the only one able to stand up to Janken's threat and without hesitation it sets off towards the antagonist's castle to face him and defeat him. To reach it, he will have to cross a large part of the world and face numerous threats. During this trip, he will do one disconcerting discovery: he is also the king's son and, consequently, Prince Egle is his brother. 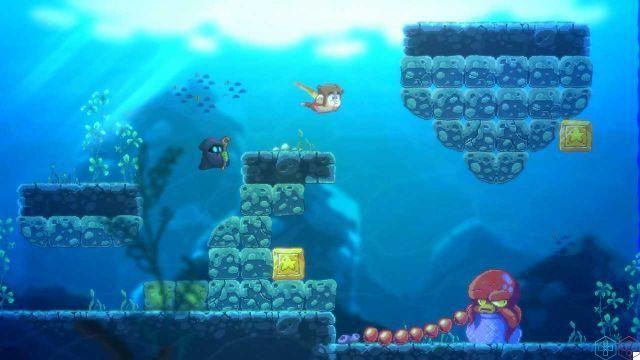 As we mentioned at the beginning of this review, Alex Kidd in Miracle World DX is the remake of a title from the eighties and from this it takes the main gameplay features. These provide that coming into contact with some surfaces or with any enemy leads to the immediate death of the protagonist, who will be able to jump to dodge the former and get rid of the latter using his fists. Through the use of these shots he will also be able to destroy the rocks in order to free the passage and to open the chests containing money and tools useful for solving the levels.

It is a game system extremely classic, which is entertaining only thanks to the high degree of difficulty. This is also because the title repeats the same level structure of the original, which unfortunately is characterized by a strong discontinuity: some are extremely complex and require the player's full attention, while others turn out easy and far too short. The impression one gets is that these chapters are inserted only to increase the duration of the game, which otherwise would be too short.

Even the boss fights, often present at the end of the levels, would have benefited from an update, above all because they repeat all the same dynamic: the villain on duty always attacks following the same two or three patterns and to defeat him it is sufficient to memorize them and act accordingly. At the end of the day, none of these encounters are memorable. 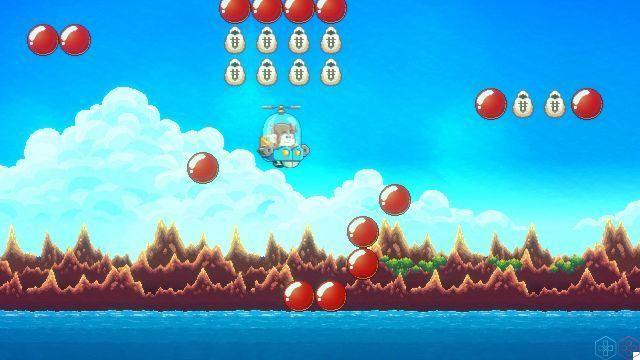 The element of the game on which the greatest effort has been concentrated modernization it's definitely the graphic sector. While opting to keep the 2D side scrolling setting, the environments have been redesigned in a cartoon style that recalls the arcade games of the early XNUMXs. In addition, the original aesthetic features have been taken over and expanded by adding depth to the environments, which are decidedly more detailed. Finally, the ability to use the game in his own original look, in addition to making the most nostalgic gamers happy, it is useful precisely to highlight the good work done by the team in this area.

On the other hand, it is evident as the final result sin of originality. Although well designed, the environments appear generic and often leave a feeling of already seen. Perhaps, to make the graphics more appealing, something more than a simple restoration operation should have been done, by inserting some original elements useful to give character instead of limiting oneself to the improved re-presentation of what is already present. 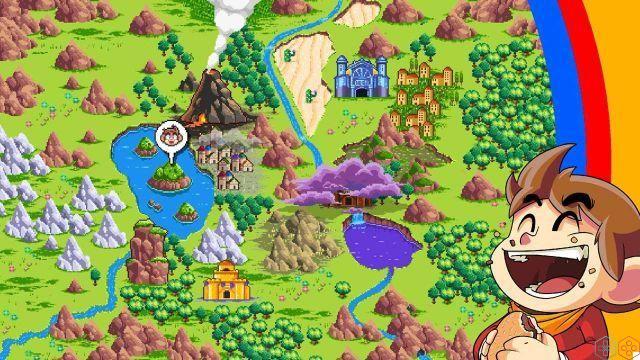 As highlighted in several places in this review, what Alex Kidd lacks most of all in Miracle World DX is theoriginality. In all its aspects, even those where we have tried to take more distance, the adhesion to the title of which the remake is being made is excessive and because of this the game is completely with no identity of its own.

This is particularly evident in the gameplay, which is the most important component of a video game: the playability should have been enriched with some distinctive element, which could bring it closer to what are today's standards of the genre and make it attractive even to players who, for personal reasons, have not known the first versions of the platform.

Despite the goodness of the new graphics, this remake therefore fails to take off the appearance of a pure nostalgic operation. Fans of the original from the XNUMXs and, more generally, video game lovers of that period will certainly be satisfied with what is proposed, but everyone else will struggle to find something to their liking in this title.

Alex Kidd in Miracle World DX was developed by Jankenteam and Merge Games and was released on June 22, 2021. It is available for PC, Xbox One, PlayStation 4, Nintendo Switch, PlayStation 5 and Xbox series X | S. Keep following us on techigames to not miss the reviews of all the best upcoming video games. You can buy this and many other titles through the convenient Instant Gaming platform.

5 Only for lovers of the original