There is no need to go around it: even before Splatoon 2, Splatoon represented, at the time of its publication, a real wave of news. It was almost the summer of 2015 and even then it was unfortunately clear that Nintendo Wii U would not have sold that much, but if something did sell it was thanks to titles like Splatoon, able to renew a genre, like almost all new Nintendo brands

The fascination for shooters at all costs in recent years has not left the Big N indifferent, which has managed to set up, thanks to its developers, a title where violence definitely takes a back seat. If you have had the opportunity to try the first title you will know well how it all happens in the light of non-violence: the weapons are loaded with ink, which does not "kill" the enemies but splats them, temporarily stuns them; and the goal, then, is not even to kill the opponents, but to color the arena. Yes, a shooter in which si spara all'arena, not to opponents. We have seen them all.

But it is also true that that innovation, that charisma, that surprise that the first Splatoon had given us was impossible to replicate even in Splatoon 2, even in the face of all the novelties, additions, improvements, proposed strategies. All that is now more, is highly appreciated, useful, and we would have liked it also in 2015. This does not mean that Splatoon 2 has its worst enemy in its predecessor, for those who have had the good fortune to play it. If, on the other hand, you are approaching the series with Splatoon 2, well, we really envy you: you have a pearl in your hands, and you are looking at it for the first time, with all the charm of surprise, which we have unfortunately lost. Fortunately, we still have a very solid game in our hands (and you can see it for yourself with the rating we assigned it).

Splatoon 2 sees us forming teams of four players (squid) each, ready to give them (not to say) of all colors with strokes of colored ink, in medium-sized arenas where almost any object can be repainted, starting from the pavement. The rules are simple: the team who, when the timer expires, will have colored the rooms as much as possible wins. Of course the opponents are there to stop us, but us we will be fully armed, although the main objective is not to eliminate them and the "kill" count will mostly be useful in stopping the enemy assault and gaining a few more experience points (and a few coins) at the end of the session.

The weapons of Splatoon 2 reproduce the well-known main ones of the previous chapter: the roller, the standard pistol and the sniper rifle (all strictly in ink and in the light of non-violence, we want to repeat it). Each weapon naturally works in a particular way: for the novice the color gun will be fine to get familiar with the game mechanics, but what colors faster and more effectively than a nice roller? Of course, with all the limitations in the attack phases that it entails. Among the welcome additions of Splatoon 2 we can mention the double repulper, two revolvers that for the first time allow the character to also perform somersaults. Still more will be added for free later, like a devastating beach umbrella that has to be swung around to spread color everywhere. 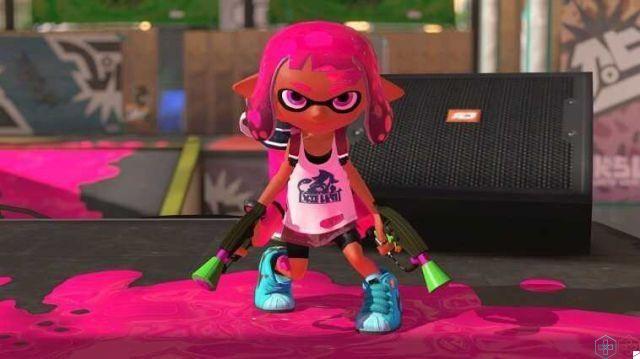 After each game we will earn experience points and money: with the first we will be able to get access to more powerful clothes, accessories and weapons, with money we will have the possibility to buy them, because certainly no one gives them to us and every cap, t-shirt or fashionable pair of shoes is the fruit of healthy brow sweat. Everything in Splatoon 2 is customizable, and each wearable item can be upgraded by unlocking its latent abilities (active and passive). For example, a pair of shoes can speed up your re-entry into the game after an elimination, or a shirt can reduce the ink consumption of your main weapon, and so on.

Each weapon is linked to a special move, which can be performed after filling the ink indicator at the top right, and to fill it all you have to do is color, color and color the game arena. They're called special moves for a reason: their being devastating. Compared to the previous chapter, they have also been revised and new ones have been added: among our favorites a homing rocket launcher, a jet-pack, and the rain of color that will slowly but surely flood the playing field with drops of color. of your team.

Splatoon 2 is the return of the first version of the game, but with many welcome additions and some necessary gameplay reinterpretations. The game servers also seemed to us more stable than ever (as long as you have a decent internet connection) and the management of games with friends has been facilitated: the League is now present, in which we will be able to cooperate for two hours. game planned with 7 other acquaintances participating, and an ad hoc mode that uses the new smartphone application of Nintendo Switch to organize games in the company of friends. The story mode (Salmon Run) is another welcome addition that will allow us to have fun even alone if the connection on vacation is just a distant memory, unlocking other weapons that can be useful later online. That the future holds an even better Splatoon 3? Nintendo Switch seems destined for a long and wonderful life.

9 The coolest title of the summer!

SteamWorld Dig 2 review: the world is no longer safe ❯

add a comment of Splatoon 2 review, the excellent comeback of shrimp types