SteamWorld Dig 2 review: the world is no longer safe

The new chapter of the SteamWorld Dig series is certainly not a title that claims to delve into your emotions, but it will give you many hours of fun and give you several reasons to keep yourself attached to the screen. Let's find out together in the full review

The world is no longer safe. Did anyone mention Rusty?

The incipit of the videogame follows a bit what was the first chapter; in fact we will find ourselves in the desert, but this time the protagonist will be Dorothy, the young robot he had helped Rusty to move in the underground of the progenitor of the series.

Following the events that occurred in SteamWorld Dig, Rusty is missing somewhere and it will be us in the role of Dorothy to embark on our journey armed with a pickaxe and in the company of a talking light, in order to find the old friend who has disappeared.

Finding Rusty will not be our biggest problem though, as we will soon discover that the mines are in turmoil due to frequent and intense earthquakes that are upsetting the lives of workers and inhabitants.

As it is easy to guess, therefore, the plot of this SteamWorld Dig 2 does not represent a marginal element. Personally I found it really interesting to continue in order to discover the link between the earthquakes and the disappearance of Rusty (spoiler?). 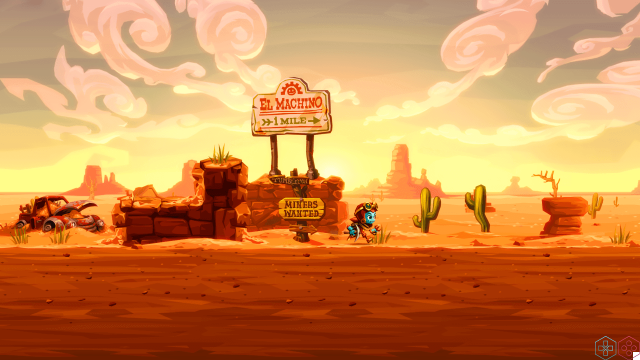 An interconnected world all to be sc (a / o) vare

The greatest satisfaction you can have in playing a video game from the SteamWorld Dig series is represented by the sense of absolute protagonism that we feel by playing it, due to the wonder of discovering the world in which we are immersed by opening one passage rather than another.

In this SteamWorld Dig 2 the bar goes even higher as everyone the places we discover are interconnected and, once a certain area has been left, it will keep the excavations we have carried out forever. This mechanic has pleasantly struck me, it is really interesting to return to an area explored several hours before and have already excavated the subsoil, reminding us why we dug in one point rather than another. All this certainly makes the excavation phase very important, as we will always find ourselves thinking of having to leave holds for a possible return or for the ascent.

The world created by the boys of Image & Form fully follows those that are the cornerstones of the genre Metroidvania. In fact, in addition to the interconnected map, there are countless secret places to find, some inaccessible in the early stages of the game, which therefore include sessions of backtracking prolonged.

There are also several doors that will catapult us into areas that have several sessions full of environmental puzzles, at the end of which we will be able to find rewards, representing an excellent variation to the gameplay. 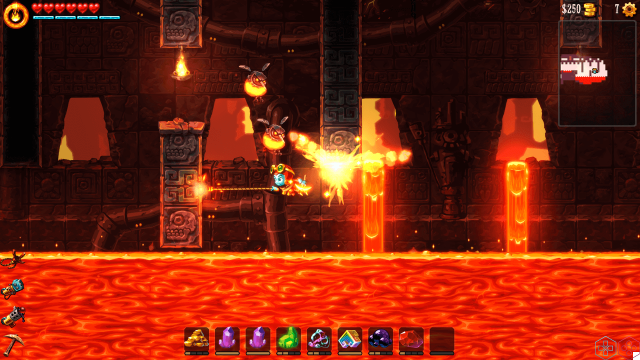 A miner's job has never been easier

In SteamWorld Dig 2, as you can easily guess, the main mechanic is represented by digging with your pickaxe in the mines and, if you don't try it with your own hands, it can be a boring and redundant operation in the long run. However the various weapons with which we can explore and the enemies we encounter along the way make this mechanic simple the strong point of the videogame, never boring and always dynamically evolving.

Also present a hint of Rpg component: in fact, by collecting the minerals present in the mines and killing the enemies, we will have the opportunity to level up and unlock new upgrades for our equipment (jackhammer, pickaxe, jet pack, bombs, etc.). Thanks to some gears that are located in narrow places on the map, we can then enhance some characteristics of the weapons. Deciding what to enhance more can also lead to change the way we approach videogames and some dangerous situations.

A pleasant surprise was the addition of some boss fight, really funny and ingenious, even if few. This is a shame, it would have been a pleasure to have a few more scattered as the exploration progresses.

SteamWorld Dig 2 is a title that certainly does not suffer from a lack of content, on the contrary, to complete it 100% they are necessary more than 15 hours of gameplay: obviously, for the more willing, there will be a great reward. 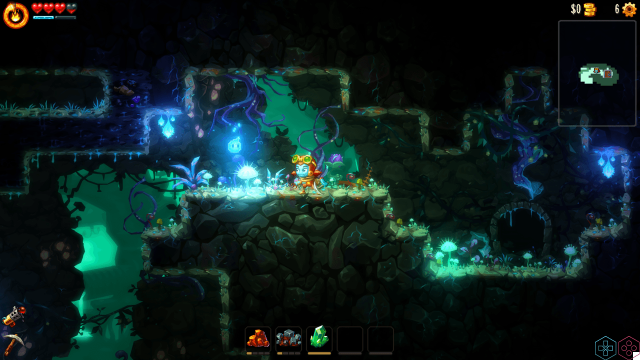 Let's clarify immediately, the graphic impact is excellent in all moments of the game but I had the feeling that more could have been done in terms of variety of settings in relation to the amount of hours required to complete the game.

Some areas are really particular and well done, others decidedly sparse and not at all inspired (if not to settings already seen in the previous chapter). Very interesting, with a particular mention, was the creation of a virtual and computerized world, simulated by a software error.

The protagonist, the different characters met in the long journey as well as the enemies, are excellently made with peculiarities of animations based on the characteristics of the area in which they are located.

Il sound compartment instead it is appreciable and never subdued, accompanying our exploration in a way that is not at all invasive.

The PC version we tested is absolutely stable and light enough to be recommended for any hardware.

SteamWorld Dig 2: who do I recommend it to?

I tell you that I am not at all a lover of the 2D platform genre indeed, I always tend to avoid them. That's why I feel even more compelled to tell you that despite this, SteamWorld Dig 2 is a video game that has really enjoyed me and has never bored me, so I would recommend it to any type of gamer. If you have the opportunity, give it a chance!

Styx review: Shards of Darkness, will our thief be able to get away with it? ❯

add a comment of SteamWorld Dig 2 review: the world is no longer safe