Serious Sam 4 review: dust off the past to parody the present

Serious Sam 4, the latest addition to an almost twenty-year series, is proposed as an interesting parody of contemporary shooters: let's find out together in this review

The first-person shooter genre has undergone several shape shifts over the past fifteen years. From the immersive dystopias of Half-Life 2, to the destructive fire of the second Far Cry, to the graphic and physical photorealism of Crysis, it seems that the innovative push towards which the sector was aiming is over for a while to leave room for more immediate and simplified solutions. In the opinion of the writer, the keystone is to be found in the arrival on the market of the first Call of Duty: Modern Warfare. Far from wanting to point out at all costs a culprit of the stagnation we have witnessed in the last decade, it is undeniable that since that fateful 2007 there have been very few successful alternatives to the formula proposed by Infinity Ward.

Quite recently, however, we have also witnessed a rediscovery of classicism, a rediscovery that often and willingly passes from parodying of the stylistic elements to which the two most famous first person shooter series in circulation have accustomed us. What if the awesome DOOM reboot allowed itself to make fun of modern products' insistence on an often superfluous narrative - concentrating an entire poetic document in a few, significant initial moments - perhaps the time had come for other old glories to return to have their say. Serious Sam 4, the latest in a series perhaps not as popular as it once was, has many things to suggest about it: let's find out together in this review.

We can't imagine any other developer other than Croteam, when it comes to this series, nor any other publisher other than those jokers of Devolver Digital. The marriage between the Croatian team and the Texan distribution house was inevitable. On the one hand, multifaceted authors, able to pass from the primordial instincts of The First Encounter to the philosophical reflections of The Talos Principle; on the other of the courageous pioneers, always ready to take risks with unusual and unconventional products.


The presentation trailers of the title, moreover, did not leave many doubts about it: the presence of the Vatican was enough in a first person shooter full of blood and guts to attract the attention of Spanish players if nothing else. Halfway between Duke Nukem and Unreal, the most serious series in the world proves to have many arrows in its bow, if nothing else by virtue of its inflexible gameplay and far from the automations of more modern products.

As we will see in this review of Serious Sam 4, not everything went as expected, but Croteam's game is able to offer more food for thought than expected. 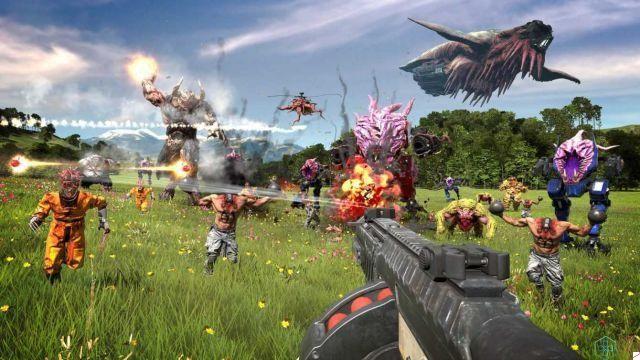 It is perhaps not the case to dwell too much on the plot of Serious Sam 4 in this review. Not because the script or its development are bad, indeed, but because there wouldn't be much to say. The new chapter of Sam Stone's adventures is set before the previous one, and sees the evil Mental invade the earth with his boundless hordes of aliens. Our hero, in command of the Earth Defense Force, it will therefore have to make its way through incessant waves of extraterrestrials to put an end to the battle.

The dialogues are studded with low-key lines who manage on many occasions to get the player to laugh. An example that has now become famous is linked to the old lady in the Vatican who offers directions to the muscular protagonist with a very characteristic accent. Anyway, from the very first minutes Croteam's ironic verve was not long in coming to notice, much to the relief of fans, so much so that the strictly narrative sector ends up being one of the most successful aspects of the production.


As anticipated at the beginning, however, the parodying work carried out by the Croatian development team is equally important. The parody does not pass only from the literary aspects, but comes to touch above all subtle subtleties of the gameplay. In the very first minutes of the game, we are given a fairly clear example of what we have just said. A soldier points out to Sam that there is an interesting secondary objective. To reach it, however, it will be necessary to climb over a fairly low wall.

How can the player do to overcome the obstacle? The first way is provided to us directly by the developers and consists in a trivial interaction with our fellow soldier. Pressing the E key will witness an awkward scene in which the soldier helps Sam to climb over the wall. But why stretch the stock so much when you could just double jump and dash over without any need to interrupt the action?

In the opinion of the writer we are fully in the realm of parody. Croteam's intent is clearly ideological. The target of criticism is the very structure of the single player campaigns to which we have been accustomed in recent years from the various Call of Duty, Battlefield, Homefront and so on. The title is full of similar moments and even on a purely literary level it is easy to notice a subversion of the trite and coarse military canvases that have characterized the last decade. 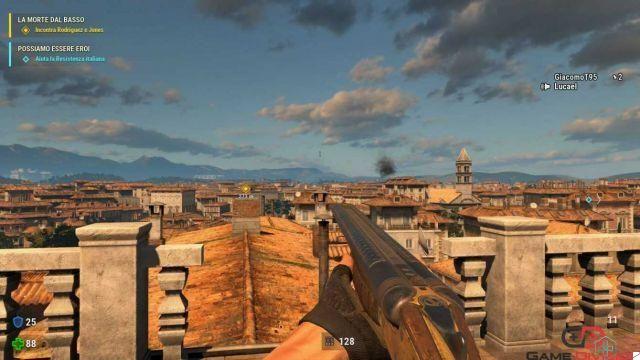 Serious Sam 4, in short, says many things without saying too much, thus demonstrating a very conscious polemical vein. The gameplay of the title, moreover, does absolutely nothing significant to change its old-school nature. The basic framework, therefore, has remained roughly the same that characterized the past chapters. Our very serious hero will have to face a large number of opponents on stage with a really wide amplitude, going from point A to point B without dying.

The arenas are mainly developed horizontally, but they hide several secret areas with ammo, medkits, pieces of armor and items to collect, of course as tradition dictates ranging from DooM to Quake, passing through Duke Nukem and Unreal. And the same Serious Sam, mind you, still represents a classic of the shooters of that period. The great breadth of the internships allowed the Croteam developers to put into them a truly huge amount of opponents.

We reason in the hundreds, and we're not kidding. Serious Sam 4 immediately pursues the player with a really high number of aliens, one more extravagant than the other. As the adventure progresses, we will learn about new types, so that variety is never lacking. If the progress of the internships is always resolved in the same way, it is also true that the disposition of the opponents often guarantees challenges that can entertain the user.

Often and not in every case, though. Sometimes the team has trodden hand with the number of creatures that will attack poor Sam, ending up making some passages very confusing and frustrating. Not even the distribution of medical kits seemed perfectly balanced, often forcing us to reload older saves to get out of otherwise unsolvable situations. Because yes, even the difficulty calibrated upwards follows the classics of the past.

Between keys to be collected and some impromptu sections on board not very conventional vehicles, adventure lets itself be played with pleasure, but it seems to lack the attention to detail that characterized its main competitor, DOOM Eternal. The inclusion of a character growth system linked to some collectibles certainly helps to make everything more replayable, but it seemed out of focus in the context of a title that could perhaps have tried to keep itself as pure as possible and on balance it is almost useless in the economy of the game.

Where Serious Sam 4 is incredibly fun is precisely in the feeling of firefights. It will be for the inordinate amount of blood and bloody effects, or for the very successful feeling of the weapons - which are many - or for the amalgamation of the action with the soundtrack, but in the end we let ourselves be carried away by the vortex of blood and violencedespite all the problems. Because yes, the levels are wide, albeit very linear, and the AI ​​of the opponents will not be quite the most refined around, but Croteam's work is so visceral in its essence that it overcomes every problem with a leap. 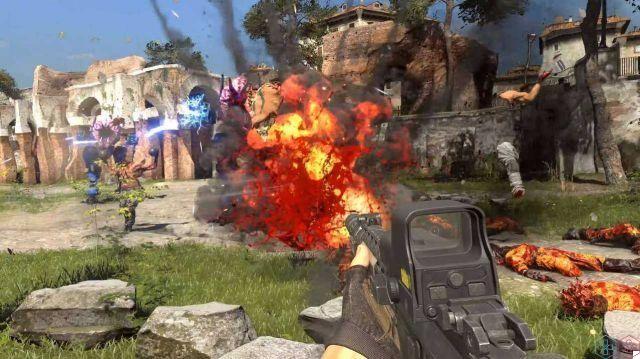 If the playful setting of the new shooter published by Devolver Digital is all in all successful and visceral, other problems seem to afflict the title on the technical front. By themselves, Serious Sam 4's graphics aren't bad at all. The polygonal models enjoy good detail and the settings, in addition to being really vast, also present some successful glimpses. The artistic direction, as per tradition, favors Mediterranean views, such as Pompeii or the Vatican, with an interesting mix of technology and vestiges of the past.

Some textures aren't the best, but the overall impact is pleasant enough. Except that, to make everything run, quite high requirements will be necessary, perhaps unjustified, despite the width of the maps and the number of enemies on the screen. The game often struggles to load textures even during cutscenes, as well as presenting unjustifiably long uploads. The fluidity, if nothing else, always remains at fairly stable levels, but we recommend that you take a look at your specifications before attempting to exterminate the hordes of Mental.

The sound sector, on the other hand, is average. The title is dubbed in English in a more than discreet way, but also features Spanish subtitles. The sounds of the weapons do not reserve particular surprises, while the accompanying music ranges from more dramatic and orchestral moments to others in which the true essence of the title comes out and dominates us with distorted guitars and very aggressive drum grooves. Just what it took to tear apart a few extraterrestrials, in short. 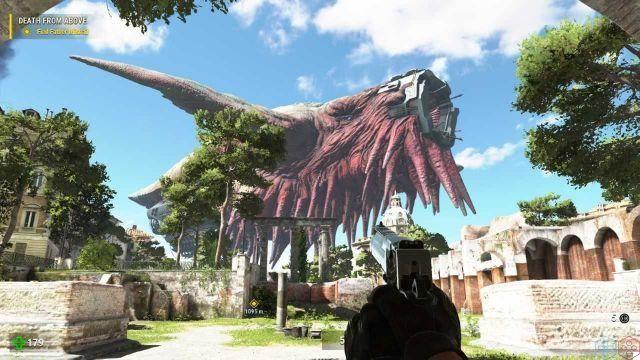 At the end of the review of Serious Sam 4 there is not much left to say. Croteam's work more or less respects all the objectives it had set, for better or for worse. Sam Stone's new adventure is a tribute to the shooters of yore, and manages to revive a series that lately no longer enjoyed the popularity of a few years ago. Not everything is perfect: there is some balance problem and sometimes the confusion on the screen is tangible. The requirements of the PC version, moreover, are very high, but despite this the game has not been optimized very well.

What matters, however, is that the end result is incredibly fun, and we gamers know that few things are as good as exterminating endless waves of aliens with wagons of bullets. This Serious Sam 4 always manages to do it well, now as then. Indeed, we could say that its value lies precisely in its ability to overturn clichés that have made the genre die in the last two decades.

What do you think of it? Let us know in the comments and stay on the techigames pages to find out everything there is to know about the world of video games.

add a comment of Serious Sam 4 review: dust off the past to parody the present