With Neighbors Back From Hell FarbWorks and THQ Nordic resurrect an old title from the past and bring it back to our screens: let's see how it went in this review

Today's videogame market seems to be aimed at archaeological rediscovery of the past. Whether it's Resident Evil 2 or Final Fantasy VII, we've seen the re-edition in more or less modern sauce of old masterpieces. In a few days a new generation of users will approach for the first time a milestone of our times which was the beautiful Demon's Souls, and here the doubt arises: we really need productions that significantly alter the original?

The author of this review has always sided quite clearly in favor of re-editions and not remakes for reasons that have above all the philology of the video game at heart. The original work should always first of all be preserved, and then - eventually - reworked. Whether it is the great classics, or cases like the one we are about to analyze - or products that have long been hidden in the mists of time - the arrival of a remaster is often equivalent to what in academic circles is called a critical edition. It is, or should be, the most accurate version of a text currently on the market. As we will see in this Neighbors Back From Hell review, it is above all the titles forgotten by the public that benefit from these operations.

Once upon a time there was JoWood

Perhaps the youngest of our readers will not even know the name of JoWood. The historic Austrian publisher was once synonymous with a certain quality and contributed to the publication of some series that made the history of their respective genres. Among these, we can undoubtedly mention the epic saga of Gothic, which, after having actively contributed to the spread of the action role-playing game on pc, was also the cause of the publisher's economic failure in 2011.

JoWood, we said, represented the climate that reigned between the two millennia quite well: its titles were very disparateie they ranged from real-time strategy to platform-style adventures, reaching even less conventional genres. The Neighbors From Hell series falls into the latter category, which is revived in a new remaster for the Steam platform by merging both episodes together.

Let's find out what Neighbors Back From Hell is about in this review and see why it's worth rediscovering. 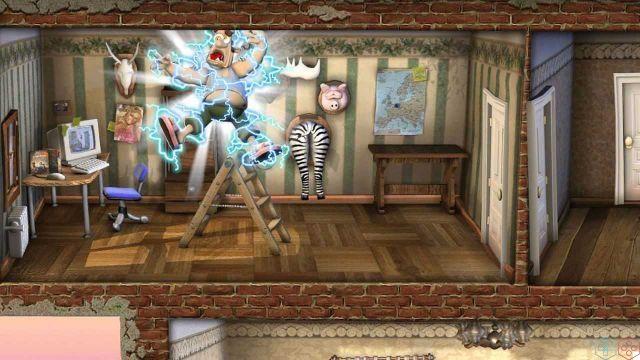 I Hate My Neighbor - Review Neighbors Back From Hell

In this review we will be concerned with establishing the Neighbors Back From Hell genre. This remastered by FarbWorks includes the two chapters developed by JoWood Vienna in the early years of the last decade and which came out on PC and consoles of the time. The title sees us put on the role of Woody, the protagonist of an irreverent TV show in which he will have to try to put a spoke in the wheel to his hated and annoying neighbor under the watchful eyes of the cameras.

Come avrete capito, Neighbours From Hell it is not a title that focuses heavily on fiction. The game involves the resolution of different stages set first in the neighbor's house and then in different places, such as a giant cruise ship. The style used by the authors is deliberately comic, since our goal will be to infuriate our opponent as much as possible by causing him the most varied pranks with the objects that we will collect during the game.

We do not know if it is our over-developed sensitivity as modern players (or readers?) That has overestimated the ideological significance of the work, but we seemed to glimpse a more than marked critical streak in the mild events narrated. The cameras and the laughter of the audience will be a constant, even while our victim will suffer violent panic attacks following the subversion of the household order. The protagonist, Woody, will find redemption thanks to the TV, but is it really like that? The evident humorous choice adopted by the authors lightens a theme that is actually more serious than it seems, and in the end we too preferred to laugh about it. 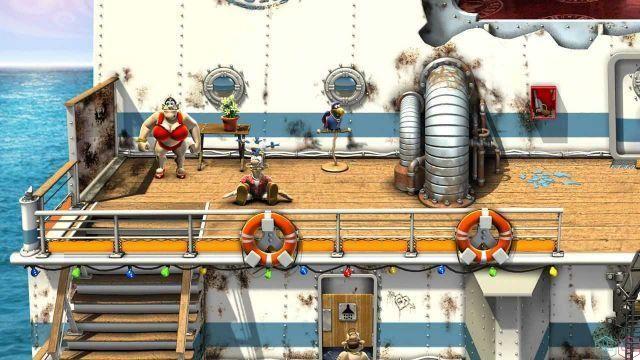 Between graphic adventure and strategy - Review Neighbors Back From Hell

The game is divided into a large amount of internships with a fairly short duration, in which we will have to control Woody through an interface very similar to that of the point and click adventures of thirty years ago. We will be able to explore the environments with just the mouse, clicking on the objects of interest and solving what are nothing but small combination puzzles. Placing dynamite in the candle box, for example, will cause our neighbor to have an unpleasant surprise when his birthday cake is lit.

Here, right the neighbor represents the variant that brings the JoWood title closer to the strategic genre. He will perform the same routine of actions until we intervene to modify it with our pranks. Woe betide getting caught, though, or if you don't get a lot of (right?) Blows and the loss of a life - there are three in all. In conclusion, our goal will be to chain as many jokes as possible without getting caught, thus triggering the laughter of the audience.

It goes without saying that, going on, internships will become more and more complex and often other external variants will also be added to complicate the situation. The longevity, however, is not too high. We believe that, once you understand the various levels, it is possible to complete the entire experience in a few hours, without then there is much to do, if not an occasional second game in the name of completeness and the highest score. 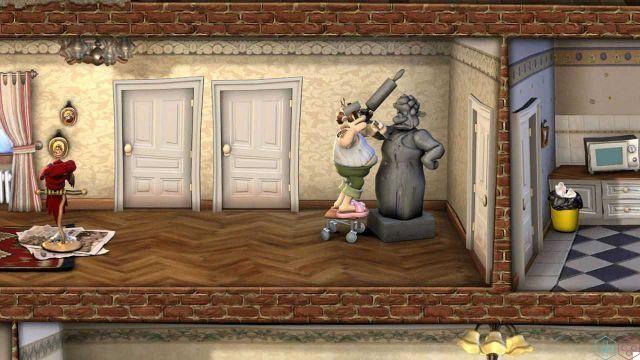 A Style Still Pleasant - Review Neighbors Back From Hell

Neighbors Back From Hell's graphics don't do much else but report the original title at a resolution more appropriate to our times, leaving intact the 2D models of the settings and the three-dimensional sprites of the characters. It must be said that, although not particularly surprising from an artistic point of view, FarbWorks' work is still pleasing to observe and takes us back in time, with a hint of nostalgia for those who, in those years, witnessed the release of many products graphically similar to the subject of this article.

The aesthetic style is very reminiscent of film productions such as Wallace and Gromit, or Hens on the run - two great animation classics in step one. The appearance of the characters is deliberately exaggerated and gives an even more caricatural vein to the events, together with the sound sector, composed of the somewhat grotesque verses of the neighbor and the incessant laughter of the spectators. The musical accompaniment, on the other hand, is particularly anonymous, but we're sure it wasn't a developer prerogative. It goes without saying that the product runs perfectly even on low-end PCs and requires really affordable requirements, as one might expect from the remaster of a title with more than fifteen years on its back. 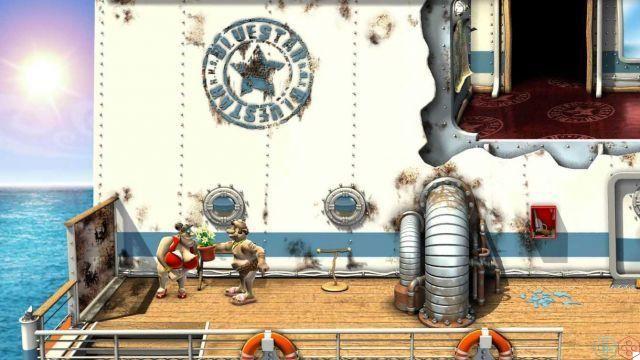 After the review of Neighbors Back From Hell, what we have left is a nice glimpse of the video game market of fifteen years ago. The JoWood title will not be an indispensable masterpiece, but in our opinion it is legitimate to keep alive the memory of even less influential products like this one even in the new generations of gamers. Woody's misadventures entertain lightly and they introduce more serious themes than expected in a very light-hearted and over the top story.

Internships are fun to complete and become more varied as the experience progresses, but they do not offer particular points of replayability. The price of fifteen euros seemed particularly honest to us, especially considering that, if you own the original version on Steam, you will be entitled to a free update to this remaster here. Long live the preservation of the video games of the past, then. On the other hand, we gladly do without our neighbors.

Have you tried Neighbors Back From Hell? Let us know what you think in the comments and stay on the techigames pages for any news on the world of video games.

add a comment of Review Neighbors Back From Hell: the greenest grass is never ours