Review Children of Morta: the Bergsons arrive on consoles

In this review we will talk about Children of Morta, a very nice hack and slash roguelike and specifically we will deal with the console version

Children of Morta is the latest title of Dead Mage e 11 bit studios and it is part of a very crowded niche, that of roguelike. Games of this genre are linked by some similar dynamics, such as the random generation of levels and the loss of all objects obtained after death, but over time the software houses have managed to differentiate a product from the other. In this review, we will try to make you fully understand the quality of Children of Morta and specifically the console version.

A fantasy kingdom but not a childish one

The game is set in the surroundings of the Mount Morta, a high mountain full of legends, magic and dangers. The villages that settled near the mountain lived in prosperity alongside the gods for years, until that time Ou, the god of the mountain, did not unleash Corruption on them.

La Corruption it is a magical force that consumes everything and is reducing Mount Morta to a heap of ruins. The deities have been imprisoned and the once prosperous realms have collapsed in on themselves. In this rapidly decaying world, the few survivors struggle to stay alive, constantly threatened by corrupt creatures and other dangers. Despite the fantasy setting of the title, which in some cases almost resembles a fairy tale, the lives of these people are represented with a crude realism which often catches you off guard.

The protagonists of this title are the Bergsons, a family of guardians who have watched over Mount Morta for generations. Despite their heritage, the Bergsons are a fairly normal family and lead a simple life, but once they understand the danger of Corruption, they will step forward to protect their land and loved ones. 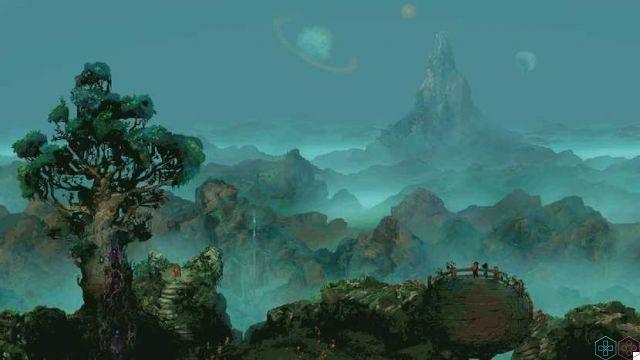 Children of Morta presents an excellent gameplay action which fits perfectly with the controls of the console on which it was reviewed (standard PS4). In the game we will be able to control almost every member of the Bergsons family and each of them will have their own style of play and unique abilities. These characters are very different from each other, and as they level up, their strengths will become clearer and clearer.

By defeating enemies, our character will gain experience that will allow him to to level up and to unlock skills from a skill tree. These skills vary for each character and are divided into active skills or passive bonuses. Moreover, upon reaching a certain level, each character will unlock a new branch of the skill tree and passive bonuses that will be available for the whole Bergsons family. These bonuses range from simple stat boosts to even more characters coming to our aid when needed. 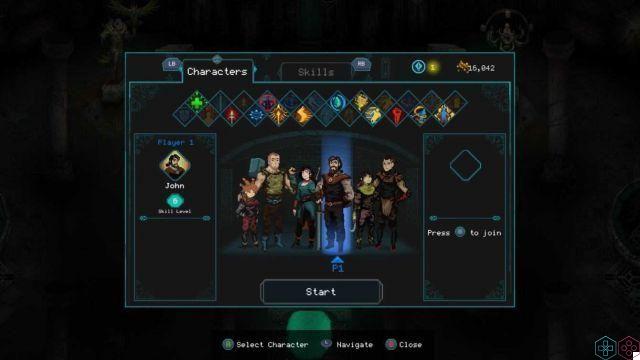 The battlefields of Mount Morta - Review Children of Morta

The dungeons of Children of Morta are randomly generated and are divided into three large areas: le caves of Caeldippo, Barahut and TerraLava. These three areas were each under the influence of a different deity and are very varied in terms of enemies and setting, ranging from verdant caves full of spiders and goblins to ancient volcanic cities full of dangerous automatons. These dungeons are also a lot interactive, thanks to the presence of chests and lethal traps, which with a little cunning we can also exploit in our favor.

To increase even more the variety of dungeons there are numerous minigames. For example, we can come across arena rooms, where we will have to defeat hordes of enemies to get prizes, or we can find memory-based puzzles. These minigames are very varied and will change depending on the level we are in, but they are not the only interesting element present in the levels, as we will often come across some NPC who will need help. These characters may ask us to deliver an item, or to escort them through groups of enemies, so as to carry on their story while also obtaining useful rewards. 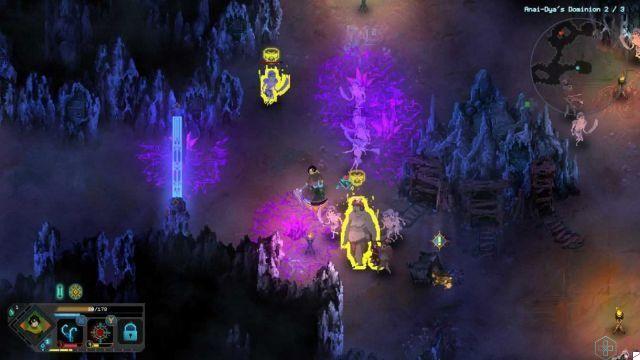 Many objects, but not enough - Review Children of Morta

As in any self-respecting roguelike, they will be present within the levels various objects active and passive. These tools are divided into four main categories: Divine Thanksgiving, Divine Relics, Amulets and Runes. Divine Graces are objects that they provide us passive bonuses, such as stat boosts and minions that will help us in combat, while Divine Relics are active objects which may have offensive or defensive effects.

Amulets, on the other hand, are objects a single use that modify our characteristics or provide us with temporary bonuses such as immortality and invisibility. Finally the runes allow you to apply modifiers unique to our basic attack or our abilities and have different effects depending on the character who gains them.

These items are the centerpiece of any roguelike, as they are essential to ensure a good variety of situations between games. Unfortunately in Children of Morta these items they are not very numerous, and by the end of the game we will surely have found them all at least once. 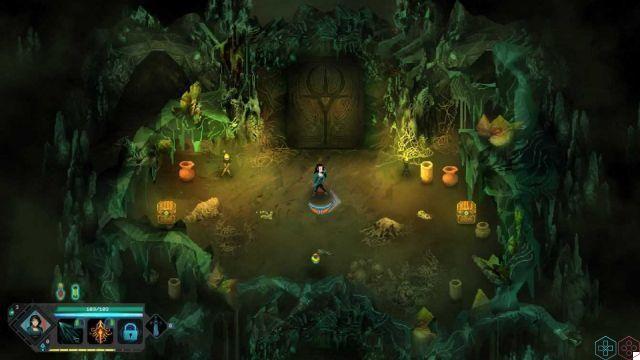 Between fights, the Bergsons rest inside their beautiful mansion. Inside the house we can unlock passive bonuses in Uncle Ben's workshop or in Grandma Margaret's study, using the money raised in the dungeons. The bonuses obtained from the workshop are based on increasing the statistics of our characters, such as damage and life points, while Grandma Margaret's Book of Rea will allow us to obtain greater effects from the objects found in the dungeons, as well as money bonuses and experience obtained.

Inside the house it will also be possible to observe the daily life of family members and witness plot events. In fact, one of the peculiarities of the title is that of being a roguelike with one linear plot which continues as we advance inside the dungeons. 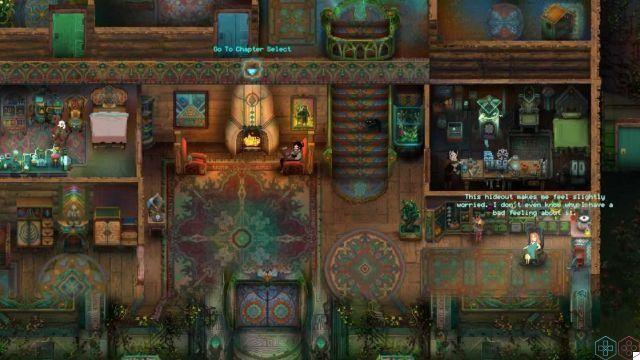 Children of Morta stands out particularly for its pixel art, simple but impressive, but the element that really makes the title shine are the animations. The characters will be truly divinely animated even in their simplest actions, such as touching their hair or resting in bed. This care in the animations allows the characters to convey many emotions that make them more than just a cluster of pixels, increasing the immersion of the game.

In particular, towards the end of the game, there will be some scripted scenes that feature truly amazing animations and which are hardly seen in indie titles. 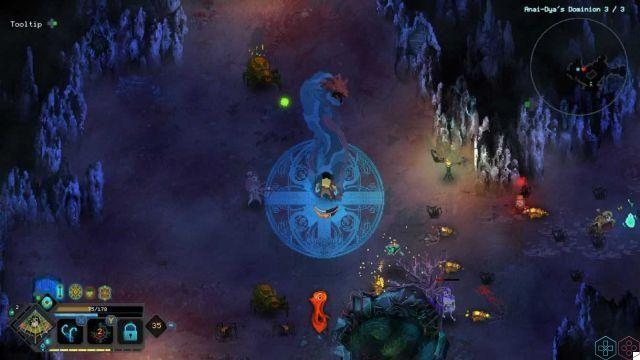 On a technical level there weren't many problems in Children of Morta, although i uploads are quite slow on consoles (at least on the standard PS4 where the test took place). Inside the dungeons, however, there are some small ones problems with the spawn of enemies, which sometimes end up being generated inside the walls. This problem becomes more serious inside the arena rooms, as without killing all the enemies, there is no way out of the area and sometimes it will be necessary to restart the game to get free. Moreover, some areas are separated by barriers that do not allow the passage of enemies and these areas are easily abuse from characters who use ranged attacks. 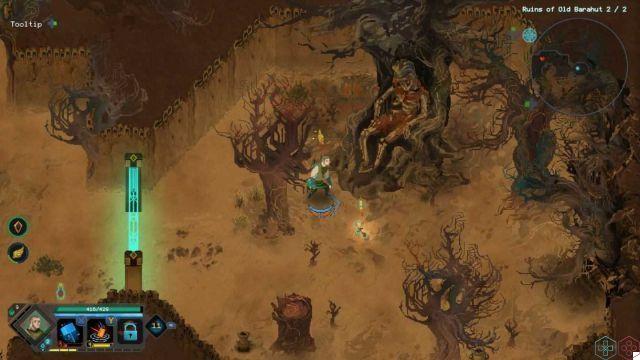 Despite the little variety of items inside the dungeons, Children of Morta remains a great roguelike, capable of entertaining and conquering with its history. The game manages to carve out its space among all the giants of the genre, offering a memorable experience thanks to original elements and a very fun gameplay action.

Children of Morta is available now for PS4, Xbox One, PC and Nintendo Switch. If you are interested in staying up to date with all the news on the title and much more, keep following us here on techigames.

add a comment of Review Children of Morta: the Bergsons arrive on consoles