Twenty-two years after the release of the first chapter, we can finally return to Faerûn with the review of Baldur's Gate 3 Early Access

From the main menu you can perceive a dark atmosphere, enhanced by music with profane voices that become more and more solemn and finally delicate. These variegated shades will accompany you throughout the adventure, or at least in this first available chapter. Attending moments of laughter to other more dramatic ones, all however with a good narrative balance, a factor criminally absent in the first Original Sin. With great curiosity we therefore analyzed Baldur's Gate 3, find out in this review for Early Access.

The great weight of the past

It is clear in the first minutes of the game resemblance to Divinity Original Sin 2, which is not necessarily a defect, but still represents a departure from the Baldur's Gate legacy. Very sensitive topic in the communities of the Bioware title who hoped for a combat system, dialogue and exploration more similar to how they once were. However Original Sin 2 has set a new standard for the genre, so it becomes understandable that we are facing one evolution of the genre which fortunately the third chapter of BG did not stop. We will see in this review of Baldur's Gate 3 how important the role of the player is and how the surrounding environment is even more interactive than in the past.

The first task to be done is to spend some time creating the character. You may want to create a generic human, or move on with a demonic Tiefling, for an Drow or a classic Wood Elf. There are no limits to choice, not even gender. You will obviously move on to the class you want to play, which surely it will affect your knowledge and then the dialogues, same thing for the background. You can decide whether to be a travel expert, an essay or something else. In short, at least an hour is likely to be spent choosing features and other options. After this, it's time to start the adventure. 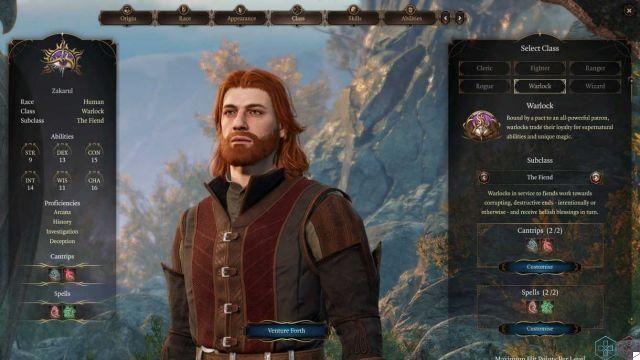 Once the adventure has begun, we discover that we are on a flying ship and prisoners of a Mind Flayer, which will soon inject a horrible tadpole with more teeth than a shark into our eye. A sentence that over time will transform us into those same sprawling creatures, losing control of ourselves. Fortunately for us the aircraft is attacked by Githyanki and Tiefling giving us the opportunity to escape and take control of the ship. However, due to an unfortunate blow to the head, we pass out flying down to the ground. The craft will continue its journey for a short time and will explode in front of the eyes of the inhabitants of the soil.

At this point we wake up on a beach and finally have the maximum freedom to explore. The open map gives the possibility to visit the places in the order we want, possibly modifying the plot path. Baldur's Gate 3 is such an "open" game that few places are inaccessible, with the right strategy and use of skills you can reach any area. This is to say that the plot of each game can change, not only based on the typical multiple choices in the dialogues, but also on the path that has been decided to follow.

This first huge map will give you the opportunity to visit refugees, run directly to them Goblin or perhaps carry out presumably secondary missions; Each way could be the right one, because there is only one goal: to find a curator who can remove the parasite before it's too late. The player can choose who to get help from. Research that will lead us to discover other people kidnapped by the Mind Flayers, suggesting the existence of a full-scale plan. 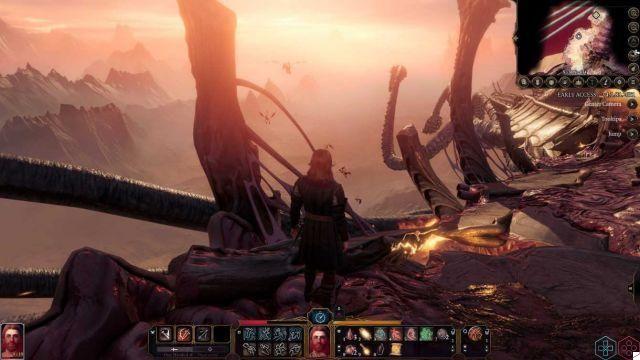 Among these unfortunates there are also the travel friends that we can recruit along the way. As usual, you can decide who you want to keep on the team or leave on the bench. Each of them has a very specific character, providing the team with very different skills and knowledge. For example, in addition to the logical support in battle, a cleric will have greater knowledge in Religion and therefore will be able to reveal specific plot details or even solve a themed puzzle.

It is also important to underline the fact that if you have a character who has specific knowledge, it does not mean that the whole team will be able to use them automatically. Here comes the slice of the game that relies on the rules of Dungeons & Dragons, the famous paper role-playing game. If we were to have Astarion the vampire only analyze a divine statue, he will most likely fail his Religion test. Using the Shadowheart cleric instead, we will have a better chance of success. 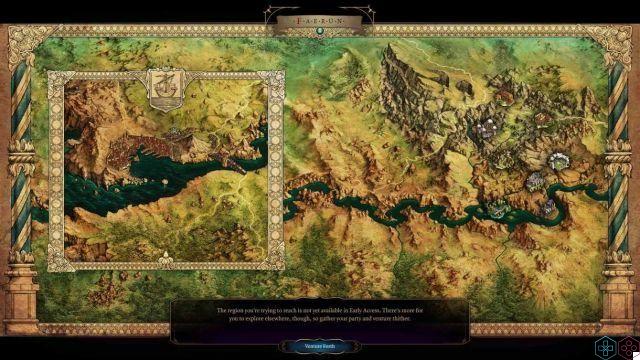 So every analysis and test can contextually change according to the character, there is no group knowledge, only individual knowledge. Furthermore, having high scores does not necessarily lead to the success of the test. As it happens in D&D, and it happened in the past with the original Baldur's Gate, almost all the tests to be successful will have to overcome a certain numerical threshold, which can be crossed with a die roll and the addition of your characteristic score. Mathematics that the game does by itself, even if every now and then you really have to roll a virtual die.

This was all that significant in terms of choices and storylines the game has to offer at the moment. It is only fair to point out that being a far-reaching title in Early Access, it is still difficult to understand how much our choices will really have relevance in the future. For now they have satisfied and surprised us, albeit sometimes with not extraordinary results. Instead, let's move on now to lead hands and throw objects. 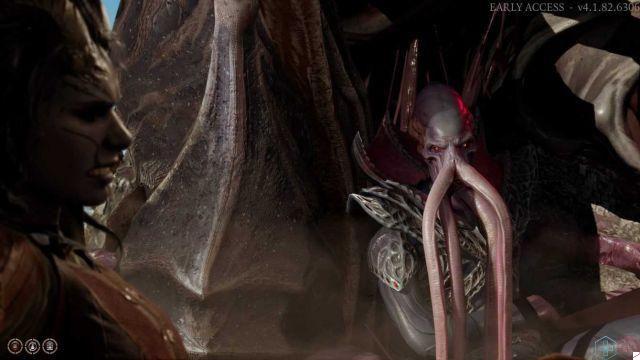 The combat system has been revived as it is from Divinity Original Sin 2, to the detriment of the real-time one of Baldur's Gate 1 and 2. In fact, we have a turn-based system which is more suited to the style of D&D. An initiative roll determines the order of attack, after which the fight begins. Based on the statistics and the class of the character it will be possible to attack, move and play a bonus action all in the same turn. The latter are the great news of Baldur's Gate 3, as they allow unique dynamics and possibly feasible by any player and character.

Among these is the Jump, which costs movement points and allows characters to reach distant platforms or gain tactical advantages and stat bonuses. A lot of fun is the chance to Push enemies, action to use when they are too close or simply when you want to blow them off a roof. There is an action to infuse the weapon, to help companions in need, to hide, to make enemies pass out, or the best of all: the Launching. 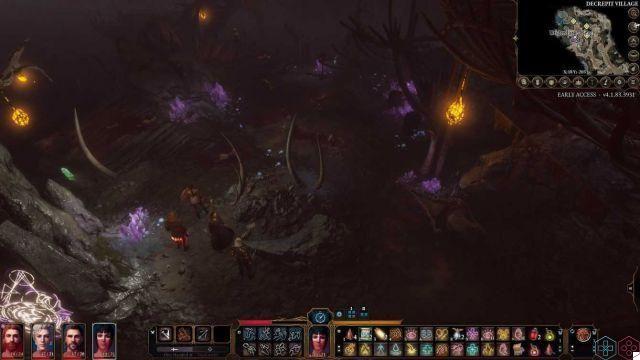 With this action every item in your inventory becomes an improvised weapon to be sent straight in the face of the enemy. Shoes, forks, a skull or better yet a barrel full of flammable substances. So many possibilities that if kept in mind can revolutionize every meeting. To emphasize the role of actions, there is a excellent map design. Baldur's Gate 3 is not limited to horizontal combat, but gives the possibility to exploit the verticality of its maps in ingenious ways.

You may want to blast your thief in a hard-to-reach location perfect for shooting undisturbed arrows. Or take advantage of one of the many environmental dangers to amplify the power of your magic. For example, water increases electrical damage, gasoline ignites and mud slows down movement. Then of course there are the class skills, but forget about being able to use them infinitely punctuated only by a cooldown. Faithful to Baldur's Gate, the third chapter brings back the skill slots. Each “day” you can use a defined number of skills, after which you can recharge them with a light rest and others with a complete rest.

The latter can only be done by returning to your own base camp, a bit like in Dragon Age Origins. In that place you will find all your teammates that you left on the bench. Each of them will be better known and we bet that in the future there will be an opportunity to decorate this vast limited area. After your rest you will always return to your place of origin, but sometimes it could happen unexpected events. 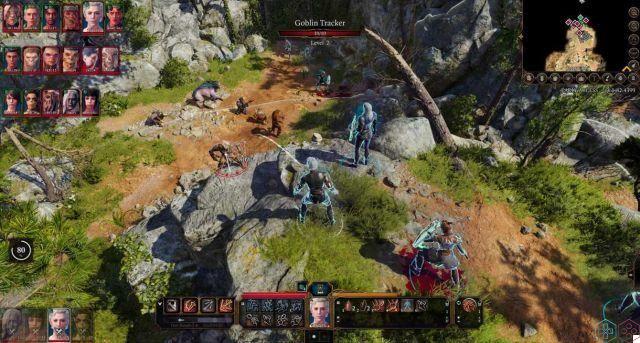 Now let's move on to the sore point of the game, however justified by its publishing method. Being an Early Access, Baldur's Gate 3 suffers from numerous bugs and performance issues. Textures load late and we are on average at 45 FPS in 1080p, while exceeding the recommended requirements. The characters split during the dialogues, we encountered some crashes and a bug occurred that temporarily prevented us from progressing. However, the developers are very active in terms of updates and the release of the game Three hotfixes have already been released. This can only bode well for smooth and smooth development.

On the other hand, what is very welcome is the vast amount of options with which you can customize your experience. So many that there are more audio options in Baldur's Gate 3 than graphics in Crysis. What we face is a PC game to the core. 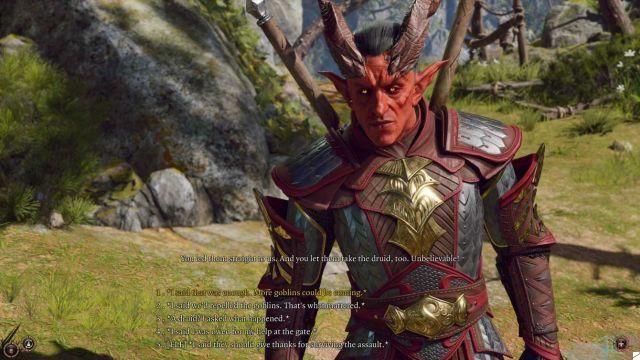 There are high hopes

Baldur's Gate 3 is a title with truly enormous potential, but perhaps the big fans of the past won't like it due to the lack of real-time combat. However what we are facing is undoubtedly a big step forward for the genre of CRPG. In essence it will look tremendously like Divinity Original Sin 2, but with a much higher amount of gameplay possibilities.

Despite everything it is still an Early Access, but Larian Studios has tried many times to know how to manage this model of publication, so the hopes that BG3 will become a masterpiece are really high. Finally it should be remembered that this is a completely game written and dubbed in English, but the developers plan to introduce the Spanish language at the time of official launch, which is expected to take place in at least one year.

What you read was the Baldur's Gate Early Access review, a game still in development but so feature-rich that an almost complete analysis was required. A new article will follow in the future in which we will distinguish later versions and certainly the review of the complete title with a much more definitive vote. The game is now available on PC and Google Stadia in Early Access. While waiting for the game to be completed, we invite you to continue following us on techigames to stay updated on video games and technology.