Azure Saga: Pathfinder is an indie JRPG that comes from Indonesia with a fury. Did this South Asian production have been able to surprise us? Let's find out in our review

Developed by MassHive Media , an indie studio based in Bandung, Indonesia, and released in March 2017, Azure Saga: Pathfinder takes us on a journey into a fantasy world of Sci-Fi hues. Will this JRPG be able to be addicting and fun? Let's find out together in our review.

Disclaimer: the Italian language is not available in this game, and you will have to play it in English. The amount of dialogue and writing on the screen requires an average understanding of the standard English language.

Azure Saga: Pathfinder - from space to fantasy in a stone's throw | Review

Let's start by saying that Azure Saga: Pathfinder, a classic (indie) JRPG that it refers to the most canonical Japanese productions. Isometric view, turn-based combat, spells and special moves, many tools and a complex and layered story that unfolds dungeon after dungeon. Everything you would expect from a right RPG?

We will play the role of a man named Synch, and his faithful android sidekick Noide. The two wander through space in search of Synch's father, but their ship breaks down and the aircraft crashes to a mysterious planet. In the arcane vegetation all seems lost, but our heroes (thanks to Noide's sensors) detect materials scattered around the planet with which to repair the ship and leave for their mission.

From here you will find out what the planet is occupied by three races, the Humans, the Ivry (creatures that are half deer and half human) and evil and dark creatures called Hollows. These races are at war with each other, and as we advance in history we will be called to take part in this conflict, having as a meeting point and reference the capital of the faction of humans, Ere.


Our adventures will have this structure: having been well equipped, from Ere, from a world map we will be able to click on it and visit the game levels one after the other, thus proceeding in the story. Together with a relatively large party, we will be called to explore numerous dungeons. Initially the playable characters will be Synch and Noide, and the others we will unlock as we progress in the adventure.

And at this point let's talk in more detail about the heart of the gameplay di Azure Saga: Pathfinder.

Nei dungeon la 2,5 D isometric view it helps a lot to orient yourself. They are structured as a series of small rooms connected to each other. Many of the rooms included in the levels contain gods micro environmental puzzles (move the obstacles in a given order to proceed), and inside each single dungeon we will have to find a key to open the most important room. 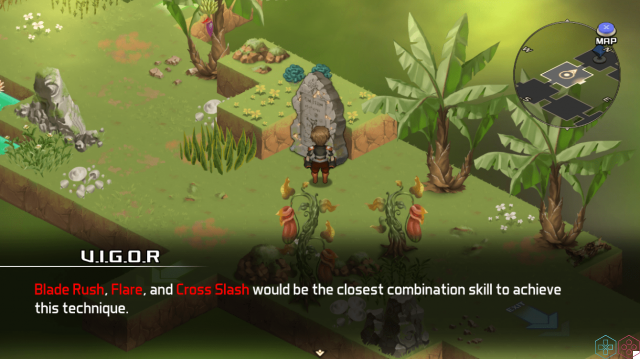 Within the levels we will be able to devote ourselves to recreational activities such as fishing, however these do not make the experience longer as the proposed minigames are not exactly fun (press a button and go). The levels are structured in a similar way to each other, and it will certainly not be a challenge to proceed in the adventure, unless you are not at all accustomed to the genre.

And speaking of accessibility and ease, let's see the battle system. This is openly inspired by that of the early Final Fantasy. Hard and pure turn-based combat, in which we will be able to use up to three members of the group. There is the possibility of carrying out special attacks by combining three special moves of the three members present on the field. The enemies are so many (the bestiary has ten pages to fill), and each of them corresponds to a type. The clashes with enemies in fact follow a logic similar to that of the Pokémon saga: each attack is more effective against a certain type of enemies.


And since at each turn we can swap the characters on the field with those in reserve and even change their order. This is because unless they have suffered spells or attacks that prevent them from attacking, our party will always attack in order 1, 2, 3, going from top to bottom. In this way we can develop diversified strategies taking into account the enemies, but this characteristic can also be considered as a carelessness.

And now let's draw conclusions, explaining what I think is the biggest flaw of the game: the lack of a real identity. In the endless chaos of indie JRPGs, Azure Saga: Pathfinder doesn't shine with its own light. We are witnessing mash-ups of plot and game mechanics that are not exactly tempting. This, combined with an underlying repetitiveness that emerges already after a few hours of play, could lead you to get bored rather soon. 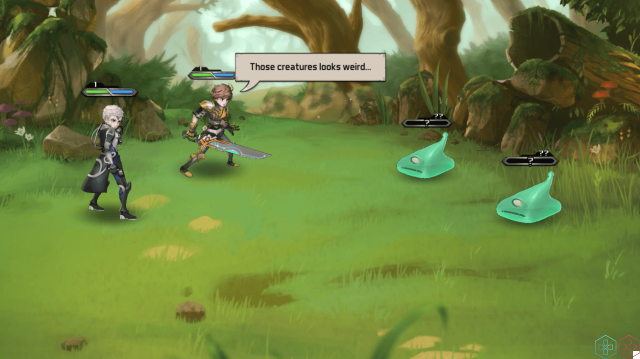 The fact is that if the plot is to your liking, you will continue to play (for 25 hours necessary to complete the adventure), but certainly not because the game puts you in front of interesting challenges to complete, or interesting clashes to win. There soundtrack is suitable, but does not give particular emotions.

Let's say that from a graphic point of view the title is not interesting - chibi-style characters and sparse settings -, and that from a technical point of view there are some flaws, and we will not have many positive elements to put on the scale. Nothing too annoying, mind you, but leaving out minor bugs, an annoying screen tearing will accompany us throughout the journey.

In a nutshell, the experience proposed by Azure Saga: Pathfinder can be interesting from the point of view of the plot and the setting, but everything else remains insipid. There are no particular flaws, and indeed, we can consider this title well packaged all in all. The missing elements here are the challenge and the fun.

Recommended for those who want to play with a Japanese-style role-playing game in total light-heartedness and tranquility.

You can buy Azure Saga: Pathfinder on Steam for 12.99 euros. Alternatively, you can play it on iOS devices.

Balthazar's Dream Review: 2 hours in the world of dreams ❯